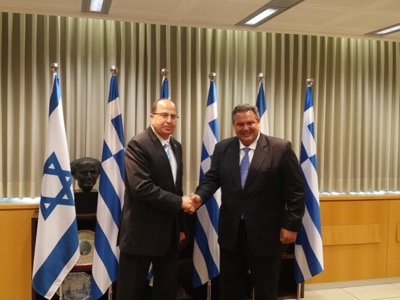 When Tsipras came to power in Greece, alarm bells sirened in Israel: Syriza, a supporter of the Palestine cause, asked to terminate Greek’s military cooperation with Israel. Faced with brutal Israeli repression of Palestinians, Tsipras warned, “We cannot remain passive, because what happens today on the other side of the Mediterranean, may happen on our side tomorrow”.

Seven months later, the alarm was turned off: Panos Kammenos, Defense Minister for the Tsipras Government went on an official visit to Tel Aviv, where on 19 July, he signed an important military agreement with the Israeli Minister of Defense, Moshe Ya’alon. Kammenos, founder of the new ring wing party Anel, chose to time this move when Greece was gripped by the debt issue. The “Agreement on the Status of the Forces”, communicates the Greek Minister of Defence, establishes a legal framework that permits «military personnel from each of the two countries to go and reside in the other to participate in training and cooperation activities». Israel has only signed a similar agreement with the United States. In the agenda for the meetings, we also find “co-operation in the field of military industry” and “maritime safety”, notably of offshore-gas deposits that Israel, Greece and Cyprus consider their own “exclusive economic zones”, rejecting the claims of Turkey.

On the meeting table are “issues on security in the Middle East and North Africa”. Echoing Ya’alon who denounced Iran as “generating terrorism, whose hegemonic ambition threatens the stability of other States”, Kammenos declared: “Greece is also in the range of Iranian missiles; if a single one succeeds in reaching the Mediterranean, this could be the end of States in that region”. Therefore he met the top brass of the Israeli armed forces to establish a closer coordination with the Greeks. At the same time, the head of the Greek military navy, the vice-admiral Evangelos Apostolakis, has signed with his Israeli counter party a cooperation agreement on non “hydrographic services” – no further details. The military agreement with Israel, concluded on behalf of the Tsipras government, is not only a personal success for Kammenos. This forms part of the US/NATO strategy that, in the offensive towards the East and the South, aims at an ever-closer integration of Greece not only in the Alliance but also in the broader coalition including countries like Israel, Saudi Arabia, Ukraine and others.

Stoltenberg, the NATO Secretary General, has declared that the EU «bailout package for Greece is “important for NATO as a whole”, as Greece is a “solid ally that spends more than 2% of its GDP on defense” (level reached in Europe only by Great Britain and Estonia).

Particularly important for NATO are the air and sea base of Souda Bay at Crete, constantly used by the United States and other allies in recent years for the war against Libya and military operations in Syria. Usable now, thanks to the agreement with Greece, also by Israel notably for anti-Iran purposes.

In such a strategic context, are recreated the contrasting interests between Greece and Israel on the one hand, and Turkey on the other hand. Turkey, where NATO has more than 20 bases and the Commander of the Ground Forces, in the name of the «fight against Isis» bombs the Kurds of the PKK (genuine anti-Isis combatants). Also Turkey, together with the USA and the «rebels», are preparing to occupy the Northern strip of Syrian territory. Invoking Art. 4 of the Atlantic Treaty, in as much as it considers that its own security and territorial integrity are threatened.