The Orphaned Near East

The world changes suddenly, but we only notice the fact a long time afterwards. Thierry Meyssan, who, in 2012, announced the arrival of Russia in Syria – which we only saw three years later – today announces the withdrawal of the two Superpowers from the Near East. 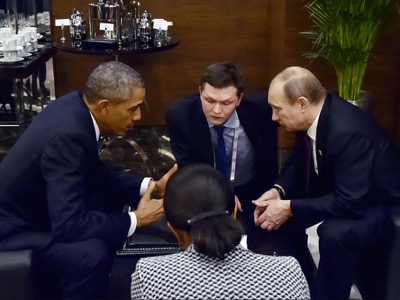 In the next few years, the Near East is going to have to solve its problems alone. The United States, who have been imposing their will since the Second World War, and Russia, who fought the jihadists in Syria, no longer want to play a major role there. The people of the region, whom the colonial powers have been treating like children for centuries, setting them one against the other, must now begin to behave like adults.

Washington, who desired to make the 21st century «American» during the era of George W. Bush, can no longer afford to do so. The United States have been forced to leave room for Russia and China. Today they have to concentrate their forces in the Far East while they still can.

President Barack Obama and his collaborators have given three long interviews to Jeffrey Goldberg, who has synthesised them in an interminable article published by The Atlantic [1]. They reveal the quintessence of the last seven years at the White House – to hold the armed forces in check, and avoid becoming involved in the Near East under any pretext. The Quincy pact, signed by Roosevelt in 1945 and renewed for 60 years by G.W. Bush in 2005, no longer has any reason to exist – the United States no longer needs Saudi oil and is wasting its time with the Wahhabis who are incapable of adapting to the modern world. The Carter doctrine of 1980, according to which the Pentagon was to control the oil fields of the Near East, and which gave birth to CentCom, is now dead. Although the security of Israël will still be ensured, Tel-Aviv can no longer count on US aid for its project to expand from the Nile to the Euphrates.

Speaking during his marathon TV show Direct Line with Vladimir Putin, the Russian President was just as clear [2]. Due to Western sanctions, his country last year experienced a recession of 3.7%, and expects approximately 1.8% next year, before it can begin to grow again. Given that the central bank has only 387 billion roubles of capitalisation, Russia is going to have to be as economic as possible in order to survive this storm.

This is why it has withdrawn its bombers from Syria, and it will not send them back. Before leaving, Russia gave the Syrian Arab Army modern equipment and trained them in its use. According to President Putin, the SAA has everything it needs to recapture the ground it has lost without any assistance.

The only thing that keeps Russia in the region is the necessity – and the same is true for the United States – of overthrowing President Erdoğan before his supremacist policies and his instrumentation of terrorism provokes a planetary catastrophe. As a result, Moscow and Washington are today supporting the Kurds against Erdoğan, and if they should enter into conflict with Syria, neither of the two major powers would get involved.

As unforeseen and sudden as it may appear, the departure of the two major powers is already a fact, and it leaves the Near East orphaned. Since nature abhors a vacuum, Saudi Arabia and Iran are now fighting directly in order to extend their influence.