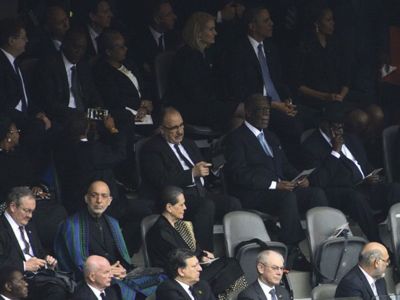 In the first line of the funeral ceremony for Nelson Mandela, who is a symbol of the struggle against apartheid, will be the US President, two former US Presidents and the Prime Minister of Great Britain – in other words, representatives of the States that lent the greatest support to the apartheid regime, notably when Reagan was president (and Mandela’s anti-apartheid organization was defined as a terrorist organization) and Thatcher was in government.

David Cameron, the British Prime Minister, expresses today «his extraordinary sadness for the death of the hero of the struggle against apartheid»; yet in 1989, when Mandela was still in prison, and Cameron was a rising star in the Conservative Party, he made a trip to South Africa, organized and financed by the company Strategy Network International, a powerful lobby opposed to sanctions against the apartheid regime.

The Democrat Bill Clinton will go to South Africa to mourn the death of «a true friend»; yet when he was president, he found every way of preventing Mandela (who became president of South Africa in 1994) from going to Libya when it was still under embargo in 1997, and from inviting Gaddafi to South Africa in 1999. This was Mandela’s response: «No country can claim to be the world’s policeman and no state can dictate to another state what to do. Those who were friends of our enemies yesterday have the audacity to tell me not to go to visit my brother Gaddafi»; they want «to make us turn our backs on Libya that helped us achieve democracy».

The Republican George Bush, who will go to South Africa to mourn the death of Mandela «a great freedom fighter»; yet when he was president, he was the architect of Africa Commando, a military and political instrument to capture anew Africa.

The Democrat, President Barack Obama, who at the funeral ceremony will repeat «I cannot imagine my life without the example set by Mandela». This is the same person who waged war destroying Libya – Libya, that helped Mandela in his toughest times and empowered the African Commando to bring as many countries as possible into Washington’s orbit, making leverage of African military elites (that the Pentagon recruits with the offer of training, arms and dollars).

Hillary Clinton will also attend Mandela’s funeral as Secretary of State and aspiring President. She was particularly active in «promoting economic growth» in Africa. Just like Cameron, Merkel and others, she has visited several African countries, including South Africa, accompanied by executives of the biggest multinationals. Those that will grab half of Nigeria’s oil, for more than 30 billion dollars per year, leaving more than half of Nigerians below the poverty threshold. Those that will grab fertile land in Africa, driving out entire communities, resulting in growing poverty and hunger.

The French President Francois Hollande, who hoisted flags at half-mast, a symbol of grief, before leaving for South Africa honoured Mandela at a meeting of 40 African leaders that was held at Paris. At that meeting, he announced that, in addition to sending other troops to Africa, France will fit out 20 000 African soldiers per year. Thus the colonial troops are reborn.

These and other «greats leaders» of the West will be at Mandela’s funeral, exhibiting to the world their personal sadness for the disappearance of a man who dedicated his life to the struggle against colonialism and apartheid. While they seek to import to Africa, a new colonialism and a new great apartheid.