The establishment of the Asian Infrastructure Investment Bank was finally approved by 22 Asian countries on Friday 24 October. On the one hand, the new regional development bank enters into direct competition with the Asian Development Bank, established in 1966 under the overwhelming dominance of the United States and Japan; on the other hand it will serve as a mechanism for regional integration and against the “pivot doctrine”, driven by Pentagon and the State Department. 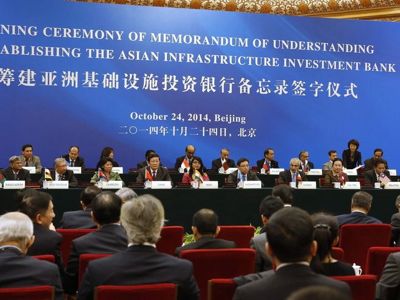 On Friday, 24 October, a group of 22 Asian countries met in Beijing to sign a Memorandum of Understanding that finally approved the establishment of the Asian Infrastructure Investment Bank (AIIB according to its English acronym), more than a year after the President of the People’s Republic of China, Xi Jinping, presented the proposal for the first time in the Asian-Pacific Economic Cooperation Forum (APEC) in the city of Bali, Indonesia. Based on what several officials have said on the subject, the new bank will serve as a platform to finance the most important projects in the Asian region in the spheres of telecommunications, energy and means of transport.

Jin Liqun, the former president of the Supervisory Board of the Chinese Sovereign Wealth Fund and the former president of the Asian Development Bank will head the institution. Just like the Development Bank of the BRICS group (acronym of Brazil, Russia, India, China and South Africa), the headquarters of the AIIB will be in Beijing. The AIIB will have a capital subscription of 50 billion dollars and an authorized capital of 100 billion dollars. China will contribute half the funds and India will be the second largest shareholder. AIIB’s authorized capital, represents three fifths of the capital held by the Asian Development Bank (165 billion dollars), the regional development bank of 67 members (48 regional members and 19 outside the region) created in 1966 under the auspices of the World Bank.

The governing principles of the AIIB will be “justice, equity and openness” a clear reference to the overwhelming dominance of Washington in the governance of the International Financial Architecture. Seven decades after the beginning of the Bretton Woods Conference, the US’s policing role over global capitalism remains unharmed despite its economic stagnation and its high level of debt both public and private. «One could compare it to a basketball game where the United States wants to establish the duration of the game, or the dimensions of the basket, the height and all the others to adapt themselves to this», declared Wei Jianguo, China’s former Trade Minister.

Indeed, the operations of regional development banks are fundamental to understanding the reach of «soft power». From their foundations, their objective is to complement the functions of the International Monetary Fund (IMF) or the World Bank as lending institutions. Combatting poverty and the programmes of transfer to the poorest sectors of the population will serve as palliative instruments to the contradictions of peripheral capitalism in order to guarantee the US a leading role in the global economy. In other words, the lief-motif of the Inter-American Development Bank (IADB), the African Development Bank and the Asian Development Bank is to support the expansion of multinational corporations (TNCs) and, at the same time, to keep to a side the influence of the Soviet Union in the economic and political spheres of Third World countries.

At the height of the Cold War, the Asian Development Bank remains within the range of the geo-economic and geo-political interests of the United States with the unconditional support of Japan. Just as the IMF and the World Bank have been governed since 1944 by Europeans and North Americans respectively. Tokyo retains the presidency of the Asian Development Bank from its inception to date. Japan and the United States remain overwhelmingly majority shareholders with 31.23% of subscribed capital and 25% of the voting power. In contrast, mainland China and Hong Kong jointly hold 7% and 6.21% respectively.

However, over and above questions relating to the lack of representation, the infrastructure projects represent a key support, without which, it would be impossible to maintain high rates of long-term economic growth. Capital accumulation on a global scale, level, is increasingly directed to the East and mainland Asia requires, urgently to mobilize resources to connect regional resources, for example, through a «21st Century Silk Route», an economic broadband that includes an extensive network of railways of continental reach, that will link China with Central Asia, Russia, Europe and perhaps even the Middle East. According to the Asian Development Bank estimates, between 2010 and 2020 alone, 8 billion dollars will be required for national projects and 290 billion dollars for regional infrastructure projects. However, the loans granted by the Asian Development Bank totalling 10 billion dollars on an annual basis is insufficient to respond to the demand for credit.

Faced with the slowing down of growth of the Chinese economy at rates lower than 8% and increasing fragility of external demand, financing infrastructure projects through the AIIB would be an unprecedented motor for Asian integration and China would benefit from a privileged access to natural strategic resources and potential consumer markets. Today, China is the first trading partner of most of the region’s countries, including India, Pakistan and Bangladesh, and the second trading partner of Sri Lanka and Nepal. In 2012, trade between China and the 10 member states of South East Asia (ASEAN) reached a record of 400 billion dollars. Clearly, before Beijing aspires to global economic hegemony, it first must consolidate its leadership in the region. This is not only with respect to economic matters but also by a greater geopolitical balance between Asian countries in order to maintain the term «the pivot doctrine», driven by the Pentagon and the State Department.

In light of the above and knowing that Japan, South Korea, Indonesia and Australia have declined to support the creation of the AIIB on account of pressures applied by Barack Obama, the support of most of the Asian continent has shown that the White House’s efforts to weaken regional integration were extremely limited against the diplomacy of Yuan. In short, setting up new institutions is an open challenge to the pillars of Bretton Woods and emphasizes the transitional process towards new forms of governance aimed at financial regionalization. Perhaps, at any moment, the North American era will brutally collapse before the burning light of an Asian dawn, centred around Beijing’s multipolar ascent.