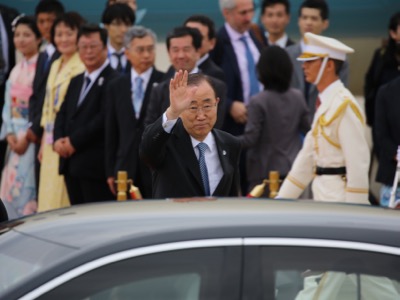 The international community has already developed a large list of actions that need to be taken. Frameworks for information exchange and cooperation already exist. However, not all of these are implemented and utilized to the fullest potential. This is why the G7 decided to focus on specific critical gaps in order to facilitate a more effective counterterrorism response by the international community.

Therefore, the members of the G7 commit to taking the following concrete actions, in accordance with their domestic laws and international obligations, to help improve the overall capacity of the international community to fight against terrorism and to counter violent extremism. The members of the G7 commit to further work on concrete steps that would facilitate the implementation of the actions identified below and regularly take stock of the progress. Leaders will revert to this issue at their next summit.

• Bolster information sharing among relevant authorities in G7 countries both domestically and internationally through existing mechanisms.

• Support INTERPOL’s information sharing role, especially in the areas of Foreign Terrorist Fighters (FTF), stolen and lost travel documents, fire arms and looted and stolen cultural property such as antiquities, and encourage all states to make full use of and contribute to its existing databases, and to update them systematically.

• Support INTERPOL’s Action Plan by enhancing the connectivity of priority countries’ National Central Bureaus with their air/land/sea points of entry.

• Strengthen international legal cooperation and, in particular, call on partners to explore ways to expedite the collection and exchange of electronic evidence in particular for criminal and terrorist related investigations.

• Strengthen cooperation among border agencies and support greater use of existing border security programs such as the World Customs Organization (WCO)’s Security Programme.

• Expand the use of Passenger Name Record (PNR) and Advance Passenger Information (API) in traveler screening.

• Call upon all states to duly implement the standards of Annex 17 to the Convention on International Civil Aviation (the Chicago Convention) and consider in view of the 39th session of the International Civil Aviation Organization (ICAO) Assembly (27 September –7 October 2016) the need for applying security measures, processes and equipment that go beyond the standards and recommended practices in light of the current level of threat.

• Address jointly without delay the issue of potential vulnerabilities in states’ aviation security systems, including by coordinating capacity building and technical assistance to them.

• Act jointly in the framework of ICAO to review and improve standards and recommended practices and its audit system, the Universal Security Audit Programme (USAP).

• Call on partners to recognize and address the threat to access control and other airport land security related measures covered by Annex 17 to the Chicago Convention.

• Evaluate jointly whether the current reporting and customer identification and verification thresholds, including as applied to new payment methods such as virtual currency and prepaid cards, are sufficient to protect the international financial system from abuse by terrorists.

• Explore jointly how to strengthen the use of terrorist asset freezing tools, including by jointly or independently proposing and considering new UN Security Council designations, by using autonomous listings to support UN designations and by responding swiftly to bilateral freezing requests.

• Share the view that the FATF is the most legitimate and effective body to shape the global effort to tackle terrorist financing worldwide, and support to reinforce the FATF network to address more effectively the worldwide threats which affect the safety and security of our citizens.

• Call on all states to enhance efforts to hinder looting and trafficking of cultural property originating from regions under the control of terrorist groups, and also call on relevant organizations such as UNESCO and INTERPOL to assist in such efforts.

• Call for expansion and systematic and immediate use of the INTERPOL database on Stolen Works of Art and support its improvement through the PSYCHE project (Protection System for Cultural Heritage).

Engagement with the private sector

• Enhance efforts to counter the threat posed by terrorist groups exploiting the Internet and social media for terrorist purposes, in cooperation with a number of stake holders including civil society, and private companies, to ensure law enforcement.

• Engage with Internet companies including Internet Service Providers (ISPs) and administrators of relevant applications to facilitate counterterrorism investigations, including the collection of relevant data, and to address the use of the internet for terrorist purposes to recruit, radicalize, and mobilize followers to violence.

• Call on the art market and collectors to contribute to disrupting illicit trade in cultural property, including by conducting due diligence with particular regard to the origin and destination of archaeological and ethnological material.

• Support endorsement of the UN Secretary General’s Plan of Action to Prevent Violent Extremism (PVE), and call for its rapid implementation, including by sharing expertise and providing relevant assistance to other UN member states as they develop national action plans.

• Review options for reconfiguring UN leadership on PVE and counterterrorism to drive forward the UN’s efforts on these distinct but interrelated agendas, both within the UN system and with external partners, especially with development actors in the field, with a view to more effectively implementing the UN Global Counterterrorism Strategy, as well as the PVE Plan of Action, UN Security Council resolutions, and the universal international legal instruments against terrorism.

• Promote pluralism, tolerance, and gender equality through cross-cultural and interfaith dialogues and understanding including through education.

• Empower civil society and local communities, particularly with a focus on the role of women and youth in countering and preventing violent extremism, including through active support to relevant organizations such as the Global Community Engagement and Resilience Fund (GCERF) and Hedayah, the international Center of Excellence for countering violent extremism (CVE), and promote the exchange of experiences among practitioners from G7 members and with priority countries.

• Underline the importance of strategic communication as a tool in fighting terrorism and countering ISIL (Da’esh)’s propaganda.

• Improve donor coordination and, where applicable, support the development of the International CT/CVE Clearinghouse Mechanism (ICCM), a GCTF initiative currently in its pilot phase, and ensure that it becomes an effective coordination mechanism to maximize the impact of CT and CVE assistance.