US Escalation Against China 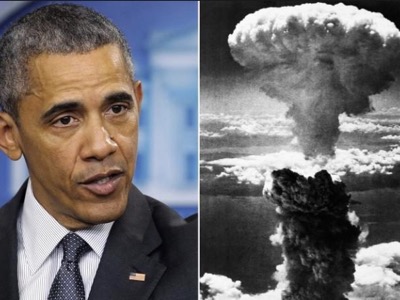 “The scientific revolution that has brought about atomic fission requires a moral revolution”: with this historic phrase (coined by the presidential speech-writers) culminated Obama’s visit to Asia. On it, he declared at Hiroshima, his willingness to “mark out a path leading to the destruction of nuclear arsenals”. The Federation of American Scientists distances itself, providing evidence that the Obama Administration has reduced less than its predecessors, the number of nuclear tests.

The Obama Administration – the New York Times documents (21 September 2014) – has launched a 1,000 billion dollar plan for building another 400 intercontinental ballistic missiles, 12 submarines and 100 strategic bombers for nuclear attack. For the “modernization” of the nuclear tests, including those deployed in Italy, a national complex composed of eight of the biggest plants and laboratories with another 40,000 operators is in the phase of expansion in the US. The race for nuclear weapons has been re-launched and at Hiroshima, Obama declared his desire to eliminate not only nuclear weapons but also war itself. Recalling that “ordinary folk do not want war anymore”, he emphasized that:
“We have to change our very mentality on war and use diplomacy to prevent conflicts”.

At that time, in Washington, the Pentagon accused China of lining up their defense systems in the South China Sea to “monitor this sea and to limit our capacity to move about in the Asia/Pacific region”. Regions where the US is increasing its military presence on the basis of a plan that also provides deploying, just before China and Russia, ships and the “Aegis” bases analogous to those deployed in Europe, endowed with launch systems adapted both to inceptor missiles and missiles for nuclear attack. While, the US missiles launch unit crosses the South China Sea, the US Navy prepares in the Pacific Rimpac 2016, the biggest naval army in the world. The Philippines has already made available to the United States five military bases and Australia, where marines have already been deployed, is preparing to host US strategic bombers planes for nuclear attack.

On Washington’s position, the entire G7 (US, Canada, France, Germany, Japan, Great Britain and Italy) that assembled in Japan, requested “the freedom to navigate and freedom for surveillance” of the South and East China Sea, confirming at the same time, sanctions imposed on Russia for “aggression” against Ukraine (whilst the EU confirms the sanctions against Syria).

The US/NATO strategy in Europe against Russia is integrated into the strategy implemented against China and Russia in the Asian/Pacific region, in alliance with Japan that is assuming a growing military role. This same strategic context is the backdrop for Obama’s visit in which the US removed the embargo for providing arms, an anti-Chinese measure. In addition, the Peace Corps (whose Cia connection is noted), that will go to Vietnam to teach English (or rather, American) and the Fulbright University that will open a branch in the city of Ho Chi Minh to provide young Vietnamese “world class education”.

The United States, defeated by the heroic Vietnamese resistance, returns with other arms.