Israel and the Emirs in Nato

The same day (4 May) that the new Supreme Allied Commander in Europe - US General Curtis Scaparrotti - took office at Nato, appointed just like his 17 predecessors by the US President, the North Atlantic Council announced that an official Israeli mission would be established at Nato’s headquarters in Brussels. [This mission] will be headed by the Israeli ambassador for the EU.

So, Israel is even further integrated into Nato, to which it is already closely linked through the “Individual Cooperation Programme”. Nato ratified this on 2 December 2008, three weeks before the Israeli operation “Cast Lead” at Gaza. It includes among other things, collaboration between intelligence services and connections with Israeli forces, including nuclear forces, to Nato’s electronic system. The US has provided Israel another three hundred bomber fighters with dual conventional and nuclear capacity and many other weapons.

Israel is not a party to the Non Proliferation Treaty and therefore is not subject to controls by the International Atomic Energy Agency. It possesses a non-declared nuclear arsenal reckoned at 100 – 400 nuclear tests including H-bombs and neutron-bombs with a power estimated to be the same as almost four thousand Hiroshima bombs. The carriers include a further three hundred F-16 and F-15 US fighters, and around 50 Jericho II ballistic missiles on its mobile launch pads. Italy concluded a military cooperation agreement with Israel, formalized in national law by Law 94/2005. It involves our country’s armed forces and military industry in activities “subject to a security agreement” and therefore secret. In this context, high level Italian technology can also be used to upgrade Israeli nuclear forces.

Germany provided Israel with 5 Dolphin Submarines and shortly will provide it with another. Der Spiegel documents that these submarines have been modified so that they can launch long-range cruise missiles.

The official Israeli Mission at Nato will be flanked by Missions of the Kingdom of Jordan and the Emirates of Qatar and Kuwait, “very active partners” that will be even further integrated in Nato on their own merits.

Jordan hosts secret CIA bases in which — the New York Times and Der Spiegel evidence [1] — Al Quaeda and Isis militant Islamists have been trained for the covert war in Syria and Iraq.

Qatar has participated in Nato’s war against Libya, infiltrating in 2011 around 5, 000 commands on its territory (as declared to the Guardian by the same head of the Qatari staff), plus those against Syria: the former Qatari Prime Minister, Hamad bin Jassim Al Thani, admits this in an interview to the Financial Times, and talks about Qatari and Saudi operations of “interfering” in Syria with the consent of the United States.

Kuwait, through the “Transit Agreement”, allows Nato to establish its first stopover in the Gulf, not only to send military forces and materials to Afghanistan but also for “practical cooperation between Nato and Kuwait and its other partners such as Saudi Arabia”. Partners supported by the USA in a war that wreaks civilian bloodshed in Yemen. Kuwait also participates in it, with 15 fighter bombers. 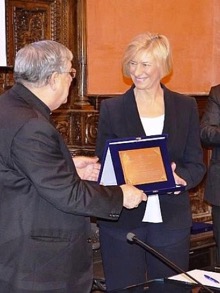 Italy now provides Kuwait with 28 new generation Eurofighter Typhoon fighters, built by a consortium to which Finmeccanica, together with industrials from Great Britain, Germany and Spain, belong. An 8 billion euro contract, the biggest ever signed by Finmeccanica, which will receive about half in cash. It was signed on 5 April in Kuwait by the Defense Minister, Khaled al-Sabah, and the Managing Director of Finmeccanica, Mauro Moretti.

The godmother of the event is Minister Roberta Pinotti, an efficient canvasser of arms (see the sale of 30 M-346 fighter for advanced training to Israel). The Eurofighter Typhoon, that Kuwait will use to massacre in Yemen and elsewhere, can also be equipped with nuclear bombs: those in the hands of Saudi Arabia [2]. We have already documented this in the news video “Nuclear Alert: Saudi Arabia has the bomb” on Pandora TV. To train the teams, Aeronautica Italiana provides strengthening “the fundamental role for regional stabilization carried out by Kuwait”.

A success for Minister Pinotti who, a week later, after selling fighter bombers to Kuwait, was honoured by the Catholic Union of the Italian Press with the «Naples City of Peace 2016 prize». At the ceremony, Cardinal Crescenzio Sepe defined Pinotti’s “commitment to the service of politics as the highest form of love, that is centred around the protection and dignity of human life”, proposing therefore “changing her title from Minister of Defense to Minister of Peace ».

At this point we ask ourselves, what does Pope Francis think?

Diplomatic Crisis between Kuwait and Iran

Legal Action Against KTKB, the bank that finances jihad