Supply of weapons to jihadists in Syria from Jordan 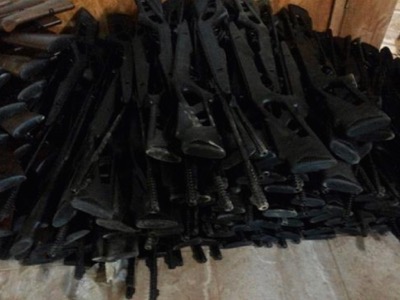 On instructions from my Government, and further to our previous letters, the most recent of which was issued as document S/2016/418, regarding the support provided by the Jordanian regime to armed terrorist groups that are committing barbaric acts of terrorism in the territory of the Syrian Arab Republic, I should like to inform you of the following:

On Saturday, 7 May 2016, at 0200 hours, armed terrorist groups affiliated with the so-called Sunni Youth Squad brought 13 locomotive and trailer trucks loaded with crates of weapons, ammunition and a field-gun trailer and escorted by six Toyota four-wheel drive vehicles, from Jordan into the town of Busra al-Sham, Dar‘a governorate.

On Saturday, 7 May 2016, at 2315 hours, armed terrorist groups brought 14 vehicles from Jordan into Syria through the Abu Sharshuh crossing, heading in the direction of Bi’r al-Rasi‘i in the Suwayda’ desert.

The Government of the Syrian Arab Republic reiterates that the conduct of the Jordanian regime and the direct support that it provides to terrorist groups in Syria is a blatant violation of the principles of international law, the provisions of the Charter and Security Council resolutions concerning counter-terrorism, including resolutions 1267 (1999), 1373 (2001), 2170 (2014), 2178 (2014), 2199 (2015) and 2253 (2015), which reaffirm that States Members of the United Nations must not provide any form of support to terrorist groups or the members thereof.

The Government of the Syrian Arab Republic once again calls on the Security Council to fulfil its responsibilities and compel the Jordanian regime to desist from its practices, which threaten security and stability in the region and throughout the world.

Source : “Supply of weapons to jihadists in Syria from Jordan”, by Bashar Ja’afari, Voltaire Network, 25 May 2016, www.voltairenet.org/article192117.html

Source : “Supply of weapons to jihadists in Syria from Jordan”, by Bashar Ja’afari, Voltaire Network, 25 May 2016, www.voltairenet.org/article192117.html