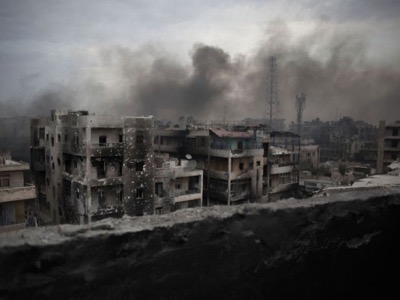 On instructions from my Government, I should like to convey to you information regarding the terrorist attacks that have been carried out against peaceful residential neighbourhoods in the city of Aleppo since Friday, 3 June 2016 and that are continuing to date.

On 3 and 4 June 2016, the so-called moderate armed opposition groups, in cooperation with the Nusrah Front and other terrorist groups, once again carried out terrorist attacks against the city of Aleppo, indiscriminately raining down hundreds of mortar shells, rocket shells and gas cylinder missiles on the Sayf al-Dawlah, Maysalun, Maydan, Hamdaniyah, Fayd, Ramusah and Sulaymaniyah areas and neighbourhoods. These terrorist attacks have so far killed more than 110 civilians, including some 40 children, and injured hundreds of others, the majority of whom were children, women and elderly persons, and caused great destruction to homes, schools, hospitals and infrastructure in those peaceful residential neighbourhoods.

These attacks are yet another example of the ongoing and systematic deadly terrorist attacks that are planned by the Erdoğan regime in Turkey and executed by the “moderate opposition” groups, in cooperation with the terrorist Nusrah Front and its affiliates, including the Army of Islam, Ahrar al-Sham and the Army of Conquest. These acts of terrorism, which are in line with the systematic and ongoing violations of the cessation of hostilities agreement being committed by those groups, are part of the barefaced attempt by the Turkish regime, and the regimes in Riyadh and Doha that support and sponsor terrorism, to undermine efforts aimed at preventing the loss of Syrian lives, and to thwart the Geneva talks and de-escalation arrangements. Unfortunately, some officials in Washington, Paris and London are still defying the opinion of the global community by refusing to have these groups added to the Security Council’s list of terrorist organizations.

Certain members of the Security Council are still preventing the Council from taking immediate deterrent and punitive measures against the States and regimes that support and finance terrorism — in particular the Riyadh, Ankara and Doha regimes. Such action only gives those regimes the green light to order their terrorist proxies in Syria to continue committing terrorist acts and massacres against the Syrian people, and to continue to undermine regional and international peace and security by using terrorism and armed terrorist groups as a tool in international relations to pursue their nefarious interests and obtain recognition of their regional political role. The refusal in the Security Council by the representatives of the United States, France, Britain and Ukraine to approve the request to have the Army of Islam and Ahrar al-Sham organizations added to the Security Council’s list of terrorist groups and entities perhaps confirms that those States and others continue to apply double standards with regard to counter-terrorism, and that they are not serious in pursuing the war on terrorism. The real reason for the massacres taking place in Aleppo and the violations of the cessation of hostilities agreement is the failure to address the fact that the Turkish regime has opened its border with Syria to allow not only thousands of terrorists, all sorts of weapons and funds to pass through, but also to allow Turkish soldiers to reach the outskirts of Aleppo.

Just as the brave people of Aleppo have done in their most difficult hours, the Government of the Syrian Arab Republic affirms that these terrorist massacres and crimes will not deter it from continuing to fulfil its duty to counter terrorism and strive to bring about a political solution to the Syrian crisis through an intra-Syrian dialogue and under Syrian leadership, leading to the elimination of terrorism; the reconstruction of facilities destroyed by the terrorists and their partners, financial backers and supporters; and the restoration of security and stability for the Syrian people.

The Government of the Syrian Arab Republic calls on the Security Council to condemn these terrorist crimes immediately and forcefully. It also calls on the Security Council to fulfil its responsibility to maintain international peace and security by taking preventive and punitive measures immediately in respect of those regimes and States that support and fund terrorism, particularly the regimes of Saudi Arabia, Turkey and Qatar. The Council must prevent those States from continuing to fund terrorism and to undermine international security and peace, and must compel them to implement fully the relevant Security Council resolutions, including resolutions 2170 (2014), 2178 (2014), 2199 (2015) and 2253 (2015).