Joint statement of the Weimar Triangle ministers for European affairs 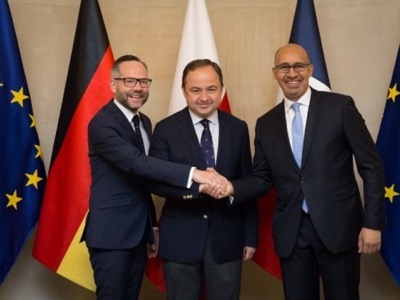 We, ministers for European affairs of Poland, Germany and France, present at a meeting on 14 June 2016 in Warsaw, adopt this joint statement to reaffirm our common commitment to strengthen the European Union’s integrity and bring it closer to its citizens’ expectations.

In the last couple of years the EU has been confronted with a number of serious challenges, of both external and internal nature. It is only together that we can overcome these challenges. Our countries fully agree that given the volatile international environment, in particular in the EU’s neighbourhood, it is important that the EU shows the ability to act. Solidarity amongst Member States is of central significance in order to put the EU in a position to tackle common challenges effectively and preserve core European values.

Nine days of the British referendum Poland, France and Germany underline their commitment to the EU as the foundation for shaping relationships amongst the European people. We appreciate the potential of the UK’s contribution to continue making the EU more united, fitter, more economically robust, and a bigger player on the world scene. While fully respecting sovereign decision of the British people, the Weimar Triangle countries express their strong preference for a “remain” scenario.

The EU and its Member States have to prove to their citizens that immigration can be managed in a comprehensive manner. We have to live up to the promise that we are value-based and open-minded European societies with a different historical and social experience. Nevertheless, we need adequate and immediate solutions to the unprecedented migration and refugee crisis, addressing the genuine causes of displacements, in particular by putting an end to the conflicts in the Middle East, destabilization of Libya, Sahel, Lake Chad Basin and the Horn of Africa, as well as continuing dealing with root causes of irregular migration and respecting asylum seekers rights. Our common goals are to enhance external border controls, improve coordination in the fight against migrant smuggling and increase cooperation with third countries, in particular with Turkey, which remains a key EU partner in this context, but also with African countries in the framework of the action plan adopted in La Valetta, in full respect of our international and humanitarian commitments. We confirm our willingness to complete work on the regulation establishing a European Border Guard as a substantial contribution to the enhancement of EU external border controls as soon as possible.

Europe faces the greatest security challenges in a generation. To counter these challenges and threats, particularly those of a hybrid nature, the EU and NATO need to strengthen one another. NATO has reacted and will continue to react with unity and resolve. NATO is committed to credible defense and meaningful dialogue in addressing the new security threat in Europe.

The Weimar Triangle underlines its unwavering support to the sovereignty, territorial integrity, unity and independence of Ukraine. We condemn illegal annexation of Crimea, aggression and ongoing destabilization of eastern Ukraine by Russia. We call for the full implementation of the Minsk agreements, fully supporting the work in the Normandy format. In this context we are concerned by continued violence along the line of contact in violation of the ceasefire and urge all sides to take concrete steps that will lead to the complete ceasefire required under the Minsk agreements. We recall that implementation of the Minsk agreement is the condition for any substantial change in the EU’s stance towards Russia, including the sanctions policy and welcome the continued EU unity and determination in this regard.

The Weimar Triangle underlines its commitment to avoiding new dividing lines in Europe and the importance of the Eastern Partnership and is committed to maintain it high on the agenda of the EU Global Strategy. At the same time, we stress the sovereignty of all partner states in the common neighborhood. The Eastern Partnership aims at supporting stability, security and prosperity in the EU and in the region. It is not directed against Russia – or anybody else. To the contrary, the Eastern Partnership seeks to contribute to the longer term goal of a wider area of stability and economic prosperity throughout Europe and beyond. We are committed to further develop the Eastern Partnership as an inclusive policy framework based on mutual interests and commitments and supporting sustained reform processes in the Eastern European partner countries. We stress the need to further follow a differentiated approach in the bilateral relations between the EU and each partner country.

Energy security lies at the foundations of economic growth and welfare of individual energy consumers. We confirm our dedication to the strengthening of the energy security of the EU and each EU Member State by integration of the European energy market, strengthening the energy infrastructure, diversification of sources, suppliers and routes, development and efficient use of all energy sources, as well as strengthened EU security of supply measures, including EU-wide cooperation, solidarity and transparency mechanisms. In line with the 2015 and 2016 European Council Conclusions calling for swift proceeding of all the proposals operationalizing the Energy Union Strategy, we reaffirm our willingness to implement, as a priority, the 2030 climate and energy package in order to achieve European commitment to reduce greenhouse gas emission domestically, increase the share of renewable energies and improve energy efficiency. In this context, the Weimar Triangle recalls the global political commitment to fighting climate change made at the Paris Climate Agreement signing Ceremony in New York on 22 April 2016 and emphasizes the need for the European Union and its Member States to be able to ratify the Paris agreement as soon as possible, and on time so as to be Parties as of its entry into force. In order to keep a right balance among all 5 pillars of the Energy Union, an equivalent level of ambition should be maintained. We underline that any new infrastructure in the EU should entirely comply with the Third Energy Package and other applicable EU legislation as well as with the objectives of the Energy Union.