Journal of the change of world order #5


Can a World War still be avoided?

Events around the Syrian crisis are accelerating, and reveal the depth of the conflict between the Atlantist camp and the Russo-Chinese block. After having observed the growing risk of a generalised war – conventional or even nuclear - Thierry Meyssan analyses the manœuvres of the United States and Russia’s responses to them. 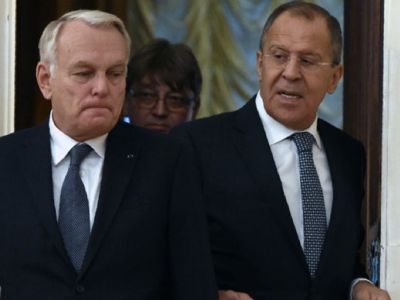 After the destruction of the pride of the Emirati Navy on 1 October, the armies of the Gulf petro-dictatorships are hesitating to continue the war with the Syrian Arab Republic on their own. It is clear to everyone that the ground-sea missile which destroyed the wave-piercing catamaran is an extremely sophisticated weapon, the like of which has never yet been seen on any battlefield. It was not fired by the Houthis, nor by the partisans of ex-President Saleh, who do not possess weapons of this order, but by Russia, which has been secretly present in Yemen since the summer.

The idea of a coordination of jihadists with their local allies alone, without the intervention of the United States, is all the more difficult to imagine since the rivalry between Saudi Arabia and Qatar has consistently sabotaged the previous stages of the war.

The United States have solicited the 64 States and the 3 international institutions which have joined their so-called anti-Daesh Coalition in order to launch an attack against Damascus. In practise, only Canada, France, Holland and the United Kingdom are present. The idea is to fire cruise missiles on Damascus and Lattakia, and to bomb the Syrian Arab Army. This project was announced to members of NATO during the Atlantic Council of 27 September. It was supported by Senator John McCain in the Wall Street Journal.

This operation implies the reorganisation of the on-going preparations for the liberation of Mosul in Iraq, currently occupied par Daesh. Everyone already knows that the real objective of this Coalition is not as announced, but is directed at changing the occupant in Mosul. It is not aimed at putting genuine Iraqi representatives in power, nor its historical inhabitants, but only Sunni Iraqis, in order to create a «Sunnistan». The Coalition has not bombed Daesh, but did not hesitate to annihilate - «by accident» - a militia composed of Shia volunteers who had come, unlike the Coalition, to deliver the city from obscurantism. President Recep Tayyip Erdoğan gave the game away by declaring to the newspaper Sabah that once Mosul was liberated, the city would belong to its inhabitants, «... and only Sunni Arabs, Turkmen and Sunni Kurds can stay». In other words, the Coalition proposes to finish the job that Washington had handed to Daesh. Its true objective is to endorse the ethnic cleansing practised by the jihadists, notably the expulsion or the massacre of Christians and Yazidi Kurds, in order to create a religiously homogeneous state. Just as we have already announced several times, Daesh will have to migrate from Mosul to al-Raqqa and Deir ez-Zor, the same way that they evacuated Jarabulus faced with the Turkish army, without putting up a fight.

Reacting to the project for the bombing of the Syrian Arab Republic, Russia revealed the installation in Syria of air defence batteries supplied with S-300 and S-400 missiles. According to Russian experts, these weapons are not only capable of destroying any aircraft in flight, including stealth aircraft, but also cruise missiles. Since this situation has never occurred on the battle-field, nobody knows whether or not the statement is true. But over the centuries, the Russians have never lied about the performance of their weaponry.

This announcement raised a huge stir in Israël, since their experts are now persuaded that it was Russian weapons that shot down one of their aircraft and damaged another when Tsahal violated the cessation of hostilities on 13 September, during Aïd. The Israëli chief of staff declared that Israël had lost airborne dominance both in Syria and in Lebanon.

The United States responded by ordering the jihadists to bomb the Russian embassy in Damascus. Russia announced the arrival in the Mediterranean of three new warships, while its aircraft carrier – expected in July – was already en route.

Aware of the risk of a nuclear war, France sent its Minister for Foreign Affairs to Moscow, who presented a project for a resolution concerning Aleppo, which he intends to register with the Security Council. This might be a way for the West to extricate itself from the confrontation without losing face. As I have not yet read the document, I can not comment on this project. However, the French Press is currently overflowing with articles about the crisis of Aleppo, all based on false ideas. Currently, the Western part of the city houses between 1.4 and 1.5 million inhabitants who are partisans of the Republic, and the Eastern part houses between 25,000 and 30,000 people. The ratio therefore concerns a population which is between 46 and 50 times greater, and not equal, as it has been suggested. It was the jihadists who shot the inhabitants of East Aleppo when they attempted to flee during the Aïd cease-fire. It was they who burned the humanitarian convoy of the Syrian Red Crescent, destined for the civilian populations they were holding hostage in Aleppo. After having offered the possibility for all residents of East Aleppo, whether civilians or combatants, Syrian or foreigners, to leave the city during Aïd, the Syrian army and its Lebanese, Russian and Iranian allies launched an operation against the jihadists at the risk of also killing the civilians whom the jihadists were holding as hostages. This was done in application of Resolution 2249 of 20 November 2015, which asks UNO members to «... put an end to the acts of terrorism committed in particular by the EIIL, also known as Daesh, as well as by the al-Nusra Front and all other individuals, groups, businesses and entities associated with Al-Qaida ».

The Russian Minister for Foreign Affairs, Sergey Lavrov, informed his French counterpart, Jean-Marc Ayrault, of several amendments that he wished to see included in the project for a resolution. He proposed a return to the terms of the agreement for the cessation of hostilities during Aïd. But it is unlikely that these amendments will be accepted by Washington, since that would entail admitting that there are no moderate rebels in Syria. The project - amended or not – will be presented to the Security Council on Saturday. President Putin is to visit France on 19 October.