Journal of the change of world order #8


Washington and Paris reboot the propaganda machine against «the Bachar régime»

The tribunals of Nuremberg and Tokyo enabled the Allies to expose the crimes committed by the Axis during the Second World War, and also served to justify both the price of their victory and their domination over the world. Based on this model, Washington believed it could judge and condemn 120 Syrian leaders, including President Bachar el-Assad, in order to justify the war and the overthrow of the Syrian Arab Republic. All that was left to do was invent their crimes… 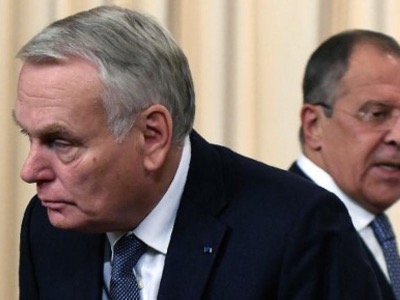 In April 2012 – in other words after the French withdrawal from thewar (which it rejoined in July), and before the Russo-US sharing agreement (30 June in Geneva) – the «Friends of Syria» had decided to judge President Bachar el-Assad before an international court of law. The point of this was to stage, a posteriori, the Pax Americana, after the murder of Slobodan Milošević in his prison at La Haye, the hanging of Saddam Hussein and the lynching of Mouamar Kadhafi.

In order to do this, the United States had created an association at La Haye, the Syria Justice and Accountability Centre (SJAC). For two years, lawyers and jurists gathered witness accounts of the «tortures practised by the regime».

The Office of Global Criminal Justice for the Secretary of State, at that time directed by Ambassador Stephen Rapp, had solicited Saudi Arabia, Jordan, Qatar and Turkey to finance a «UN Special Tribunal for Syria» on the model of the «UN Special Tribunal for Lebanon». Let us remember that the Lebanon Tribunal, contrary to its denomination, is not a tribunal in the real sense of the term, since it was created by only two executives, the General Secretary of the United Nations and the Prime Minister of Lebanon, without ever being endorsed either by the Security Council or the Lebanese Parliament. This pseudo-tribunal would have been able to ignore the rules of law and condemn the Syrian President without proof.

The principle of the tribunals for Lebanon and for Syria was imagined by Jeffrey Feltman, ex-US Ambassador in Beirut, then Under-Secretary of State for Near Eastern Affairs, and currently Director of Political Affairs for the UNO. Mr. Feltman created the Tribunal for Lebanon, after having personally organised the assassination of Rafic Hariri, to judge and condemn Presidents Emile Lahoud and Bachar el-Assad, whom he intended to accuse. We were able to consult an internal document from his office, and learned that after the overthrow of the Syrian Arab Republic, NATO had planned to judge and condemn 120 leaders of the country, 80 of whom were already listed as persons under sanctions established by the United States and/or the European Union.

On 20 January 2014, two days beore the opening of the Geneva 2 negotiations, the London-based law firm Carter-Ruck accused Syria of having tortured and killed more than 11,000 of its own citizens during the war. It then published a report by three international lawyers authenticating 55,000 images allegedly taken by a defected military photographer. Although two of the lawyers were seriously called into question for their partiality in previous affairs, and the third had been tasked by the CIA to create the Syria Justice and Accountability Centre (SJAC), and despite denials by Syria, John Kerry did not miss the opportunity of quoting this document at the opening of the Geneva 2 Conference.

On 31 July 2014, the Commission for Foreign Affairs of the House of Representatives interviewed the Syrian photographer. He showed 10 images among the 55,000 in his collection, but only after having blurred them out, rendering them unidentifiable.

And oh my! On 22 September 2014, Russia and China opposed their veto to a French project for a Resolution which referred to the International Criminal Court concerning the crimes committed in Syria. The State Department ruled that the material gathered, although extremely voluminous, had no more value than the false witness statements from the Tribunal for Lebanon. As a result, it ceased to sponsor the preparations for the Syrian Nuremberg.

However, the Secretary of State recently sponsored the Center for Victims of Torture in Minnesota, not only for its actions, but also in order to come to the assistance of «victims of the régime» - if they can find any - but not to help the 80,000 people kidnapped by the United States and tortured by the Navy in Guantánamo and in prison boats in international waters during the two mandates of George W. Bush.

Besides this, the State Department sponsored an exhibition by Qatar at the United Nations in New York, then at the Holocaust Museum in Washington, and finally, last week in Rome – based on the photos from the Carter-Ruck law firm. Of course, there was no question of showing all 55,000 photos, but the same 10 blurred-out photos accompanied by a few others relative to the war. At the same time, the pro-Israëli representative, Eliot Engel, (already the author of the Syrian Accountability Act) presented the proposition for law H.R.5732, which was aimed at strengthening the sanctions against Syria.

On 6 October 2016, Holland (whose military is illegally deployed in Syria) organised a meeting at their embassy in Washington in order to relaunch the Syria Justice and Accountability Centre (SJAC) and finance the project of a Tribunal for Syria. Germany, Belgium, Denmark, Italy, Norway, the United Kingdom, Sweden, Switzerland, and of course the United States, announced that they would participate with a contribution. The project should cost only a few million dollars per year.

For Washington, it is now clear that the Syrian Arab Republic will not fall, and that it will be impossible to judge and condemn President Bachar el-Assad without proof. This set-up is part of the conditioning of the Western public as the «defenders of Good against the cruel Syrians». France, which has been successively spokesperson for the interests of Turkey, then Qatar, then Saudi Arabia, and today, Israël, does not see things this way. It therefore hopes to judge the 120 Syrian leaders (who are already condemned on paper) before the International Criminal Court… in absentia.

On 10 October, the French Minister for Foreign Affairs, Jean-Marc Ayrault, announced that he had asked a group of lawyers to find a way of referring to the International Criminal Court, despite the predictable opposition of the Security Council.

It seems that Washington is preparing to accept the end of the unipolar world. In this case, the most ridiculous and terrifying accusations against Syria will serve to darken the image of the Russian camp.

"A Report into the credibility of certain evidence with regard to Torture and Execution of Persons Incarcerated by the current Syrian regime", Carter-Ruck, January 20, 2014.