Journal of the change of world order #9


Should Vladimir Putin be tried?

Considering that Vladimir Putin is responsible for the rise and recovery of Russia, the US and Israëli neo-conservatives have been attempting since 2011 to arrest him, try him and condemn him before an international court. As a faithful servant of their strategies, French President François Hollande has publicly suggested that Putin be held responsible for the crimes of the jihadists in Syria. 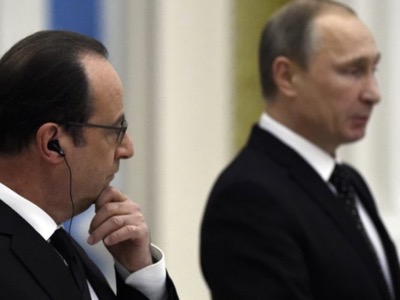 François Hollande and Vladimir Putin, a year ago.

During the Second World War, the French head of state, Philippe Petain, who had abolished the Republic, had his ex-heir apparent, Charles De Gaulle, head of the French Forces of the Interior, judged and condemned to death.

On this model, the current President of the French Republic, François Hollande, has evoked the possibility of opening an international legal procedure for the war crimes committed in Syria - and to judge not only the President of the Syrian Arab Republic, Bachar el-Assad, but also the President of the Russian Federation, Vladimir Putin [1] – a subject that was hinted at by UN General Secretary, Ban Ki-moon.

These declarations appear while Canada, the United States, France, Holland and the United Kingdom are supporting the jihadists of East Aleppo against Hezbollah, Iran, Russia and Syria [2].

The desire to condemn Mr. Putin is not new (successively for the Second Chechen war, Ukraine and now for Syria), but is a recurrent idea of the US and Israëli neo-conservatives. During the Russian presidential electoral campaign of 2012, the United States even proposed to help President Medvedev to run against Vladimir Putin, to finance his electoral campaign and give him full access to the inner circles of the leaders of the planet, if he would promise to deliver Vladimir Putin to them. Which he obviously did not do.

On 29 July 2015, the neo-conservatives presented to the Security Council a text by Victoria Nuland (wife of Republican leader Robert Kagan – she became the spokesperson for Democrat Secretary of State Hillary Clinton, and is today assistant Secretary of State for Europe and Eurasia) [3]. The text proposed to create a Special International Tribunal to judge the authors of the catastrophe of flight MH17, which was shot down in Ukraine, causing 298 fatalities. The text referred to an international Enquiry Commission, of which Russia was officially a member, but had been excluded by the other members. It was therefore possible to claim that Russia was responsible, and thus to judge and condemn Vladimir Putin.

Russia not only pointed out the absurdity of creating an international Tribunal for a minor news item, but also the specious character of the procedure, and opposed its veto. The Western Press minimised the event.

Washington is right to consider Vladimir Putin as the architect of the reconstruction of Russia after the dissolution of the USSR and the pillage of Boris Eltsine (whose cabinet had been formed by the National Endowment for Democracy). It imagines, wrongly this time, that if Putin is eliminated, it may be possible to force Russia back down to the place it occupied 20 years ago.

President Hollande informed his Russian counterpart that he would not accompany him during the inauguration of the new Orthodox cathedral in Paris, which was planned for the 19 October, but would settle for receiving him at the Elysée. The interview could therefore only concern the situation in Syria.

President Putin postponed his visit to France to an unspecified date. His spokesperson declared that he would be ready to go to Paris as soon as his French counterpart felt comfortable. A reaction reminiscent of the way one might treat a capricious child.

The current dispute between Mr. Hollande and the Russian Federation concerns both the question of Ukraine (refusal of the Nazi coup d’état in Kiev, the incorporation of Crimea, and support for the Republic of Donbass) and also the Syrian question (refusal of the attempted jihadist coup d’état, and support for the Syrian Arab Republic). It is unlikely that a solution will be found before the end of Mr. Hollande’s mandate, or with his successor, if this should be Mr. Juppé, as the polls suggest. These two men have in fact sealed their personal future with Washington in the blood of the Syrian people.

Officially in favour of the French strategy, the British Minister for Foreign Affairs, Boris Johnson, has called on his compatriots to demonstrate in front of the Russian embassy in London – a form of support which seems to anticipate a withdrawal by the United Kingdom.

Could Turkey swing over to the Russian camp?

Building Totalitarianism in Europe – The Last Coup of Victoria Nuland