While the Atlantist Press persists in projecting onto Donald Trump the artificial debates that Hillary Clinton imposed during the campaign, and while the calls to assassinate the elected President multiply, Trump is preparing to change the paradigm, and overthrow the Puritan ideology that has dominated his country for two centuries. But can he succeed? 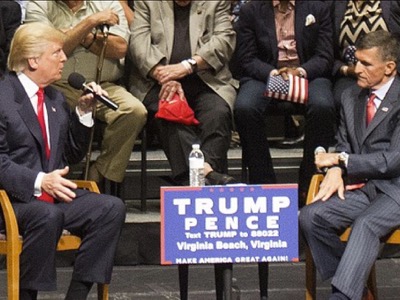 The international Press is working to persuade us that the electors of Donald Trump have expressed a revolt of the white working classes against the élites. But in fact, all they are doing is prolonging the message of Hillary Clinton, whom these electors specifically rejected. It refuses to consider that the current cleavage has no connection with the themes she treated during the campaign.

And yet we have all seen a new line of fracture appear, not between, but in the heart of the two major parties. A number of Republican leaders supported Clinton, and several Democrat leaders supported Trump. Bernie Sanders even met with him to offer his services. Also, the analysis of the votes in terms of community loyalties (women, Hispanics, African Americans, Muslims , gays, etc.) no longer has any meaning. Although we were inundated with the idea that a vote for Trump was a vote for the hatred of minorities, at least a third of these minorities voted for him.

A few journalists tried to base their comments on the precedent of Brexit, although they had been just as surprised by that decision, and just as incapable of explaining it. If we analyse foreign precedents, we have to at least to take into account the surprise elections of Narendra Modi in India and Rodriguo Dutertre in the Philippines (an old US colony).

Despite the propaganda, the British did not vote against the Europeans, nor the Indians against the Muslims, nor the Philippinos against the Chinese. On the contrary, each of these three peoples hope only to save their own culture and live in peace. Although he was responsible for the anti-Muslim riots in Gujarat, in 2002, Narendra Modi offered his hand to Pakistan, persuaded that the problems between the two countries have been organised and sustained by the colonial powers. In the same way, Rodriguo Dutertre created astonishment by seeking rapprochement with the Chinese «enemy».

A few weeks ago, I explained in these columns [1] that the cleavage which divides the United States is not determined either by ethnic loyalties or social class, but by the Puritan ideology. If this explanation is accurate, we should witness an existential struggle of the partisans of this ideology against the Trump administration. Everything that the new President undertakes will be systematically sabotaged. Already, the sporadic demonstrations against the result of election show that the losers have no intention of respecting the rules of democracy.

Rather than thinking about how we might profit from the Trump administration, we should be asking ourselves how we can help him to succeed in liberating his country from its own imperialism, in order to put an end to a unipolar world and the «Wolfowitz doctrine» - or how we can substitute cooperation for confrontation.

While the US Press speculates on the possible nomination of personalities from the Bush administration to the Trump administration, we should be anticipating the political role that the commercial executives of the Trump Organisation will have to play. They are the only ones he can trust.

We should also take into account General Michael T. Flynn who, although he is a Democrat, was Trump’s main advisor on foreign policy and defence during the campaign. A Commander of Military Intelligence, from the first Geneva Conference to the conquest of Iraq by Daesh, he has never stopped opposing President Obama, Secretary of State Clinton, Generals David Petraeus and John Allen, and Jeffrey Feltman, concerning the use of jihadists and terrorism in order to maintain US imperialism. Whether as National Security advisor, director of the CIA, or Secretary of Defense, he will be the best ally for peace in the Levant.