Following the deaths of a Russian ambassador at Ankara and a high diplomat at Moscow, President Vladamir Putin has requested the Russian intelligence services to strengthen its protection of institutions both within the country and abroad. We highlight that some exceptional measures have been taken to protect President Putin’s annual press conference, scheduled for Friday.

Contrary to the Turkish practice, Ankara accepted that the inquiry on the assassination of the Russian Ambassador be conducted by a Russian-Turkish Commission. Russia has immediately dispatched 18 experts.

According to the Turkish press, the assassin, Mevlüt Mert Altintas, had during recent months, been incorporated into the service 8 times to protect President Erdogan.

The Turkish police had proceeded to take in 13 persons close to the assassin for questioning and is questioning them.

According to Mevlüt Cavusoğlu, the Turkish Minister of Foreign Affairs, the mastermind of the operation would have been Fethullah Gülen (the Islamic preacher and CIA agent, who has been granted refugee status in the United States). However the Kremlin considers that it is still premature to come to that conclusion. Later on, the Syrian branch of Al-Qaeda claimed responsibility.

No information has been published on the death of the high level Russian diplomat at Moscow. We still do not know if he was assassinated or if he committed suicide.

On 20 December, the meeting of the Russian, Iranian and Turkish foreign ministers took place without any problems at Moscow. [1]. 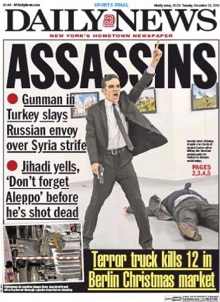 The headlines of the front page of New York Daily News reads “Assassins”, the plural being used not with reference to the assassination of the ambassador but Presidents Putin and Assad that the paper charges with the responsibility for the deaths in Syria. In an editorial, Gersh Kuntzman celebrates the assassination of the ambassador who helped “this extremist Assad to kill hundreds of thousands of civilians”. The journalist compares this murder to the murder of the Nazi ambassador at Paris in 1938 [2]. This daily newspaper, with the fourth highest distribution in the United States, is owned by Mortimer Zuckerman, the former president of the Congress of the Chairs of the key American Jewish organizations.

The corpse of Andrei Karlov has been repatriated to Moscow (photo). A state funeral will be organized and [will take place] in the presence of his friend, President Putin.

[1] “Joint Statement by the Foreign Ministers of Iran, Russia and Turkey on agreed steps to revitalize the political process to end the Syrian conflict”, Voltaire Network, 20 December 2016.