The liberation of East Aleppo marks the end of the attempt to overthrow the Syrian Arab Republic. It was only possible because of the abandon of Qatar and the partial change of position of Turkey. However, part of Syria is still occupied by jihadists in the service of NATO. The next military victories and the end of the war therefore depend on the secret negotiations which have just begun between the members of the Atlantic Alliance. 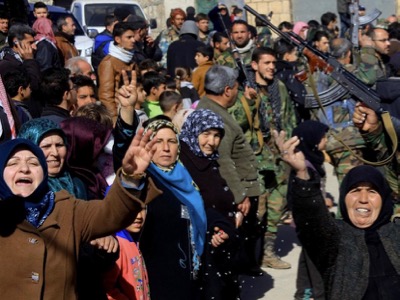 A joyful crowd welcomes the Syrian Arab Army to Aleppo.

The liberation of East Aleppo by the Syrian Arab Army was only possible because the foreign participants accepted to cease supporting the jihadists. Their retreat could not have been negotiated by the Syrian Arab Republic, but only by the Russian Federation.

Moscow has managed to turn Qatar and make it an ally. Qatar’s change of heart was sealed by the sale by Moscow of one fifth of the capital of Rosneft, at the beginning of December, in Doha. Rosneft, the jewel in Russia’s crown, is the largest company in the world. By implementing this transaction, allegedly in order to bail out Russia’s budget deficit, Igor Setchine and Vladimir Putin have inextricably united the political energies of the two greatest gas exporters in the world. De facto, Qatar dropped the jihadists, although since last May, it has disposed of a permanent office at NATO headquarters in Brussels.

The other revolution is that of Turkey. While as a state it remains a member of NATO, its President Recep Tayyip Erdoğan has become a personal enemy of Washington. Since the general elections, Moscow has been leaning on Erdoğan in order to break the ties between Turkey and the United States.

Even though this is a complex manœuvre which may take some time, it panicked Tel-Aviv, who commanded the assassination of ambassador Andrei Karlov in Ankara – a murder which was duly approved and celebrated by the New York Daily News, the fourth-largest newspaper in the USA, and public address system for the toughest of the Zionist lobbies. Perhaps Tel-Aviv also commanded the shooting, the same day in Moscow, of the director of the Latin American bureau of the Russian Minister for Foreign Affairs, Peter Polshikov.

After having considered for an instant that Karlov’s death might be a move in a double game by Erdoğan – the assassin had been one of Erdoğan’s body-guards - Moscow realised that it probably was not so. Vladimir Putin therefore reinforced the security of Russia and her representatives abroad. Incidentally, this episode attests to the fact that, despite appearances, President Erdoğan is no longer the master of his own house.

The capture of foreign officers in a NATO bunker in East Aleppo illustrates the evolution of the conflict. The captured men were principally British, US, French, Saudi and Turkey. By publicly confirming a non-exhaustive list of 14 names, ambassador Bachar Ja’afari stood NATO squarely in front of its responsibilities – a very different approach from that taken in February 2012, when Syria engaged in bilateral negotiations with France and Turkey during the siege of the Islamic Emirate of Baba Amr. At that time, Damascus had returned about forty Turkish officers and twenty French officers to their original army, either by the intermediary of Mikhaïl Fradkov (director of Russian Intelligence services), or directly via Admiral Edouard Guillaud (French Chief of Staff) at the Lebanese frontier. But the agreement which had been concluded with President Nicolas Sarkozy was not respected by his successor, François Hollande.

The existence of a NATO bunker in East Aleppo confirms what we have been saying about the role of NATO LandCom in the coordination of the jihadists, from Izmir. But the Atlantic Council, supreme organ of the Atlantic Alliance, never gave the go-ahead to this operation. As with the attack on Tripoli (Libya) in August 2011, Washington used NATO systems without certain of its members being informed. By doing so, it was applying the Rumsfeld doctrine, according to which there is no longer a permanent coalition around the United States, but only custom-built coalitions, according to the targets chosen by Washington.

The liberation of Syria should continue at Idleb. This governorate is today occupied by a horde of jihadist groups without a common commander. Since these groups are incapable of ensuring their own intendancy, and even less that of the civilian population, the zone is de facto governed by NATO via a string of pseudo-NGO’s. At least, this is what was noted last month by a US think-tank. To beat the jihadists there, it will be necessary first of all to cut their supply lines, in other words, close the Turtkish frontier. This is what Russian diplomacy is currently working on.