Following the parliamentary impeachment of Dilma Rousseff (Brazil) and Mauricio Macri’s arrival at the Pink House (Argentina), the United States is desperately trying to increase its military presence in Latin America, focussing particular attention on the South Cone. Peru, a member state of the Pacific Alliance, is the most recent victim of Washington’s imperial incursions. At the end of 2016, one of Peru’s regional governments, the Amazonas, approved the establishment of a new US military base that is being marketed to the public as a response centre for natural disasters. 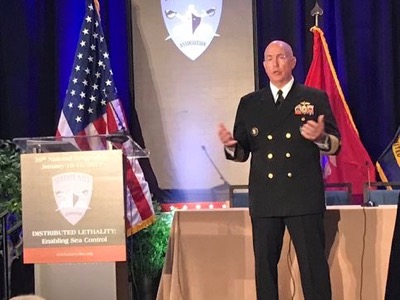 Admiral Kurt W. Tidd, Commander of the US Command of Armed Forces in South America (US SouthCom).

With just a few days to go before leaving the White House, Barack Obama has decided not to waste the opportunity to strengthen the deployment of US troops in South America.

Indeed, [three parties] - one of Peru’s regional governments (the Amazonas), the U.S. Southern Command or SouthCom and the company Partenon Contratistas E.I.R.L. - have just signed off a plan to set up a new military base, under the sheepskin of the Centre for Operations for Regional Emergency (COER) in the Amazonas [1]. The funding for this centre will be just over $USD 1,350,000. With the launch date for the project being 29 December 2016, it will be completed in approximately 540 days.

According to information provided by the Peruvian government, the US military base will have a heliport covering 625 m2; a two storey building on the first floor of which will be a 1,000 m2 warehouse for humanitarian aid. On the second floor, the COER will function together with the operational modes (logistical, communications, monitoring and analysis etc.); there will also be a conference room, a press room, dormitories and a 800 m2 parking lot.

There can be no doubt: this is intervention wrapped under a blanket of humanitarian aid. Quite contrary to the official line, it is not a strategy driven to strengthen the Peruvian capacity to respond to natural catastrophes. The United States is sinking its military claws into the South Cone under the approving eye of Peru’s President, Pedro Pablo Kuczynski. South American sovereignty is under threat.

The United States no longer needs to launch wars to conquer and assert its hegemony on Latin American soil; now the region is brought to heel by far subtler means: through initiatives of covert militarization [2]. In addition to its war against terrorism, Washington is using the fight against drug trafficking and its alleged commitment to respecting human rights as covers for intermeddling in the internal affairs of other countries.

Peru is a vital platform to enable the United States to consolidate its plan to dominate the whole of South America, an area, that, as we already know, has immense reserves of natural strategic resources, (gas, oil, metals, minerals etc.). At least during the last decade, South American governments have inflicted a mighty blow to US economic and political gravitation on the continent.

However, since 2009, Peru has not posed any resistance to Washington’s imperial incursions which have converted it into one of the countries in Latin America with the greatest presence of North American armed forces on its territory: before approving the installation of this new military base in the Department of the Amazonas, the US SouthCom had already taken root in the regions of Lambayeque, Trujillo, Tumbes, Piura, San Martín and Loreto.

It must be stressed that military cooperation between Washington and Lima is not restricted to setting up military bases; the United States has followed up by fully integrating itself into the [Peruvian] security and defense apparatus. Pursuant to authorization by Peru’s Ministry of Defense, special operation units of the Joint Command of Armed Forces, the Command of Intelligence and Joint Special Operations and the Special Unit, VRAEM, received training from US forces between May and September 2016 [3].

In tandem, the Peruvian forces have led countless joint military exercises with the United States. Their justification? To strengthen its defence strategies against external aggression. One of the most important operations is the Silent Forces Operation (SIFOREX, by its English acronym). This operation takes place every two years in the Mar de Grau and is considered one of the most important international naval operations.

Peru is clearly aware that South America is sailing through turbulent waters and is, at the same time, affronted by an aggressive campaign to harass it. In addition to economic woes [4], the region is the victim of a powerful offensive driven from outside that seeks, through all kinds of means, to consolidate Washington’s presence.

US military incursions in the region are advancing at an accelerated pace. This is partly due to several governments turning to the Right - especially after Mauricio Macri assumed the presidency of Argentina, and the parliamentary impeachment of Dilma Rousseff in Brazil–, and partly due to the tireless effort to undermine the influence of countries such as China, Russia and Iran [5].

Arming Peru right to the teeth, represents a vital pawn for the United States to succeed, further down the line, in setting up other military bases in Argentina, at its border with Brazil and Paraguay [6]. Undoubtedly, building a better future for South American countries confronts a serious danger …