What would happen if Washington gave up on the jihad?

President Trump’s desire to fight Daesh and to put an end to international terrorism is going to be extremely difficult to implement. Indeed, it will cause damage to the states who organised it, and implies a reorientation of international politics. The new President of the United States does not seem ready to give his troops the order to attack until he has found and sealed new alliances. 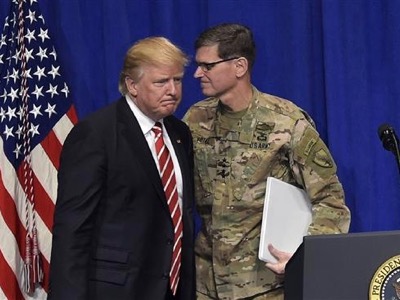 The opposition against President Donald Trump is so strong that the plan to fight Daesh, which is scheduled to be presented on 22 March during a Coalition summit in Washington, is still not ready. Its political direction is still vague. Only the objective of eradicating jihadism has been agreed upon, but none of the implications of the plan have been resolved.

General Joseph Votel, the head of CentCom, still has not presented the options on the ground. He should do so only at the beginning of April.

On the ground, the plan is restricted to the exchange of information from the United States on one hand, and Russia and Iran on the other. In order to maintain the status quo, the three powers have agreed to prevent any confrontation between the Turks and the Kurds. And intensive bombing campaigns are being carried out against al-Qaïda in Yemen and against Daesh in Iraq. But nothing decisive. Orders are to hold.

The weapon of international terrorism has been managed on behalf of London and Washington by the Muslim World League since 1962. It includes both the Muslim Brotherhood (composed of Arabs) and the Order of the Naqshbandis (mostly composed of Turko-Mongols and Caucasians).

Until the war in Yemen, the military budget of the League was greater than that of the Saudi army, which meant that the League was the biggest private army in the world, a long way ahead of Academi/Blackwater. Even if it was only a land army, it was all the more efficient in that its logistics came directly from the Pentagon, and because it also had many suicide combatants.

It was the League – that is to say the Sauds – who furnished London and Washington with the personnel to organise the second «Great Arab Revolt», in 2011, on the model of the Revolt of 1916, but called this time the «Arab Spring». In both cases, the aim was to apply pressure on the Wahhabis in order to redefine the regional frontiers to the benefit of the Anglo-Saxons.

The point is not simply to abandon the weapon of terrorism, but also: to shatter the alliance between London and Washington for the control of the Greater Middle East; to deprive Saudi Arabia and Turkey of the weapon they have been developing on behalf of London and Washington for half a century; to determine the future of Sudan, Tunisia and Libya.

Besides which, it is also necessasry to come to an agreement with Germany and France, who have been sheltering the leaders of the Brotherhood since 1978, and who have financed the jihad.

As of now, we may note that the United Kingdom doesn’t see things in the same way. It turns out that it was the GCHQ (British Signal Intelligence) which wire-tapped Trump Tower during the electoral campaign and the period of transition. And according to Petra, the Jordanian news agency, Saudi Arabia secretly financed a third of Hillary Clinton’s electoral campaign against Donald Trump.

This is why President Trump seems to be looking for new allies who will enable him to impose the changes he wants.

He is currently organising a meeting with President Xi Jinping during which he would be able to plan the membership of his country in the Chinese Investment Bank. He would therefore be placing his allies before the fait accompli – if the United States participate in the construction of the Silk Roads, it would become impossible for the United Kingdom, Saudi Arabia, Turkey, Germany and France to continue the jihad in Iraq, Syria and Ukraine.

Source : “What would happen if Washington gave up on the jihad?”, by Thierry Meyssan, Translation Pete Kimberley, Voltaire Network, 21 March 2017, www.voltairenet.org/article195697.html

Source : “What would happen if Washington gave up on the jihad?”, by Thierry Meyssan, Translation Pete Kimberley, Voltaire Network, 21 March 2017, www.voltairenet.org/article195697.html