The Mexican Press Club has awarded Thierry Meyssan the International Prize for Journalism 2017 in the category of geopolitical analysis.

The ceremony took place in Mexico City and was well attended by Latin American personalities in the media world and representatives from the Mexican government.

This prize aims at honouring the quality of Meyssan’s analyses or more specifically, his investigations into the September 11 attacks and his coverage of the ensuing wars in Lebanon, Libya and Syria.

Thierry Meyssan, the President and Founder of Voltaire Network, is currently the editor of the leading Syrian newspaper, Al-Watan. 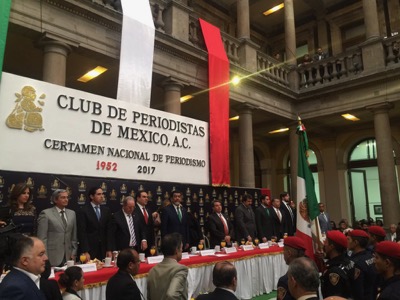 Participants observing a minute’s silence in memory of the Mexican journalists killed on the job. After Syria, Mexico is the most dangerous country for the press.