The construction works on the South Stream gas pipeline, which should have provided the European Union with Russian gas in 2015, have been been disrupted and brought to a halt by Bulgaria, after the US applied pressure on it. The President of the European Commission has supported this decision even though it significantly prejudices the Union’s interests (Russia is already poised to sell its gas to China). Thus the President of the EU Commission is acting against the interests of those he claims to defend and unreservedly supporting Washington. 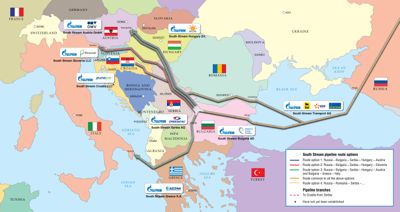 On Sunday, the Bulgarian government announced that it had interrupted work on constructing the South Stream. This is a gas pipeline that should transport Russian gas into the European Union, bypassing Ukraine. “I ordered stopping the works –Prime Minister Plamen Oresharski communicates - we will decide the way forward after our consultations with Brussels”. In recent days, the President of the European Commission, Josè Manuel Barroso, announced the opening of an EU proceedings against Bulgaria for alleged irregularities in procurements for South Stream.

Only three days before, on 5 June, the leader of the Socialist Bulgarian party that supports the Oresharski government, confirmed that the Bulgarian section for the gas pipeline should have been built notwithstanding Brussels’s request to close the project. “For us, it is of vital importance”, emphasized Kuiu-mgiev, Vice-President of the Parliamentary Commission For Energy. And Glossov, the President of the Chamber of Builders, declared that “the South Stream is a puff of oxygen for Bulgarian businesses”.

What has happened? The project came to life in November 2006 (during Prodi’s second government), when the Russian Gasprom and the Italian ENI sign a strategic partnership agreement. In June 2007, Pierluigi Bersani, Minister for Economic Development and the Russian Minister for Industry and Energy sign a memorandum of understanding for the construction of South Stream. Under the project, the gas pipeline will be composed of an underwater section, 930 km long, crossing the Black Sea (in Russian, Bulgarian and Turkish territorial waters) and a land pipeline through Bulgaria, Serbia, Hungary, Slovenia and Italy up to Tarvisio (Udine). In 2008-2011, all the intergovernmental agreements are concluded with countries through which the South Stream crosses. In 2012, the following companies have the following shareholdings in the public limited liability company (a società per azioni) that finances the building of the underwater section:
• the German Wintershall: 15%
• the French Edf: 15%
• the Italian Eni (having transferred 30%): 20% and
• the Russian Gazprom: 50%.
The construction of the gas pipeline begins in December 2012 and aims to launch a supply of gas by 2015. In March 2014, Saipem (Eni) is awarded a contract worth 2 billion euro to build the first line of the underwater gas pipeline. 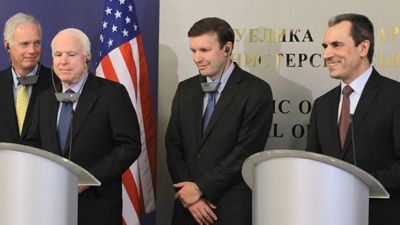 Above, US Senators Ron Johnson, John McCain and Chris Murphy, who have come to ask the Bulgarian Prime Minister, Plamen Oresharski, to breach contractual obligations and to stop building the South Stream gas pipeline.

However in the meantime, the Ukraine crisis erupts and the United States puts pressure on its European allies to reduce their imports of Russian gas and oil which constitutes around a third of EU energy imports. The first US objective (which we wrote about on 26 March [1]) is to prevent the South Stream being built. To this end, Washington applies increasing pressure on the Bulgarian government. First, it criticizes it for having entrusted the construction of the Bulgarian segment of the gas pipeline to a consortium which includes the Russian company Stroytransgaz subject to US sanctions. Using a tone replete with blackmail, Marcie Ries, the US ambassador to Sofia, declares: “We warn Bulgarian businessmen to avoid working with companies subject to US sanctions”. The decisive moment is last Sunday when at Sofia, Senator John Mc Cain, accompanied by Chris Murphy and Ron Johnson, meet the Bulgarian Prime Minister and communicate to him Washington’s orders. Immediately afterwards, Plamen Oresharski announces the suspension of the works on the South Stream.

A symbolic event: a project of great economic significance for the EU is sabotaged not just by Washington, but also by Brussels though the hand of the President of the EU Commission. We would love to know what the Renzi government thinks of it, given that Italy – as Paolo Scaroni, Eni’s number one man, has warned - could lose contracts worth billions of euro if the South Stream were to be shelved.