The US flag covers Three Seas in Europe

While the European Union seems to be swamped with internal problems, the United States has launched a shake-up of Central Europe under the title, “The Three Seas Initiative”. This is a huge project, the brainchild of the Obama Administration and put in motion by the Trump Administration. The end-game? Creating an Anti-Russian bloc that will protect Western Europe. 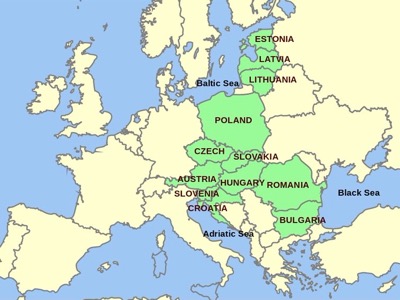 What a triumph it will be for President Trump, when he arrives on an official visit to Warsaw on 6 July! Poland, assures the White House, is a “loyal Nato ally, and one of the US’s closest friends”. As it happens, Poland is the launching pad for the US/Nato strategy that has dragged Europe yet again into a Cold War against Russia. It is to Poland, that the armoured US 3a Brigade has been transferred. This Brigade is one of the four groups of Nato battalions under US command “with advanced empowered presence” lined up in an anti-Russian function.

Poland is also credited with being one of the four European Nato countries that has achieved the target, set by the US in 2014, of spending more than 2% of the GDP on the military. To off-set this expenditure, Warsaw announces, Poland will not be contributing to the “Defence Fund” launched by 22 June 2017.

So, in Washington’s eyes, President Duda’s Poland is well resourced to take on board another onerous commitment: launching and driving “the Three Seas Initiative” a new project that brings together 12 countries situated between the Baltic, the Black Sea and the Adriatic: Poland, Lithuania, Latvia, Estonia, Hungary, the Czech Republic, Austria, Bulgaria, Romania, Croatia, Slovakia and Slovenia. As all of them are EU members, President Duda defines the Initiative “a new concept to promote European Unity”.

But with the exception of Austria, all these countries are at the same time, members of US-led Nato. And Washington exercises a stronger pull over these countries than does Brussels.

The “Three Seas Initiative” will be held at President Trump’s “inauguration”, i.e. the forthcoming conference to be held in Warsaw on 6 July; however, it is noteworthy that the initiative was conceived within the Obama Administration. This was announced on 25 August 2016 by the Joint Declaration of Dubrovnik, that presented it as an initiative aimed at “connecting the economies and infrastructures of Central and Eastern Europe from the North to the South, expanding cooperation in the sectors of energy, transport, digital communication and the economy generally”. The official reason: “to make Central and Eastern Europe more secure and competitive”. The US will think about this.

In his speech at the Conference on the Three Seas, announces the White House, President Trump “will focus on developing infrastructure and energy security, evidencing, among other things, the first deliveries of American NLG (natural liquid gas) to Poland shortly within four months”. A terminal in the Baltic port of Swinoujscie, costed around a billion dollars, will permit Poland to import US LNG, to the tune of 5 billion m3 per year, which can be increased to 7.5 billion m3 per year.

Through this and other terminals, including the one planned for Croatia, gas sourced from the US or from other countries through US companies, will be distributed by the relevant gas pipelines to the entire “Three Seas region”. The plan’s aim is clear:
• to blame Russia thus reducing its gas exports to Europe - this objective can only be achieved if the export of US gas (which is more expensive than Russian gas), will be encouraged by substantial state subsidies;
• to make Central and Eastern Europe, in competition with Germany and other European powers, gravitate even more closely to the US, not only militarily but also economically; and
• to create within Europe a macro-region with limited sovereignty, being directly under US influence: the Three Seas.

This would essentially fragment the European Union and enlarge Ukraine and others. While Europe’s political map is changing once again, the flag that flies there is still the Star Spangled Banner.