A movement to ensure while on our feet, we are asleep

The movement “Nuit debout” has just been created in France (as well as in Spain and Germany). Its aim? To block the draft El-Khomri law on the reform of the Labour Code and, more generally, to fight against neoliberalism. Thierry Meyssan slams these discussions for their futility and incoherency. He makes pointed reference to the manipulations of Team Gene Sharp, which has organized, on behalf of the CIA, the coloured revolutions and the Arab Spring. 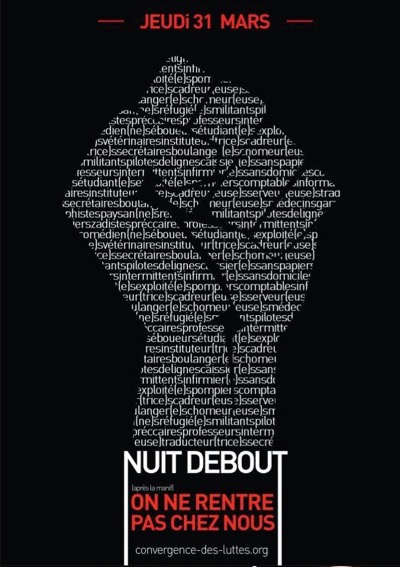 The Parisian press are ecstatic at the birth of a political movement “Nuit debout”. Some hundreds of people are flocking to the main squares of the key French cities to engage in discussion and to recast the world anew.

All it took was a few days to put this “spontaneous” movement together. The movement now boasts two websites, a radio and a web television. In Paris, Place de la République, 21 committees have been set up, as in an inventory thought up by the surrealist poet, Jacques Prévert: artistic animation, the climate, canteen, how to set up a demonstration, drawing on your feet, the garden of knowledge, demonstrations, camping, democracy, science on your feet, strikes generally, education, economy, feminism, LGTBI+, “TV debout”, the blank vote, the French in Africa, disease and communication. It is within all this discussion, that they hope to plot out the future of the country.

“Nuit debout” allegedly arose on 23 February, from the showing of François Ruffin’s militant film “Merci patron”. The audience then created a collective entity called “Convergence des luttes". The intention was to gather together the concerns of workers and migrants, etc. [1]

Nonetheless, a reading of the appeal drafted by “Convergence des luttes” does not fail to surprise. It reads:
“This movement is not born and will not die in Paris; from the Arab Spring to the 15 M movement, from Tahrir Square to Gezi Park, Place de la Republique and a number of other places occupied this evening, the same angers, hopes and convictions are being displayed: the need for a new society, where the people actually rule and dignity and freedom are not meaningless declarations” [2].

Well, if this movement was not born in Paris, as its initiators claim, who then had the idea?

The references to the “Arab Springs”, the “Movement of 15 M”, “Tahrir Square” and Gezi Park” all refer to movements clearly supported, if not initiated, by the CIA:
• The “Arab Spring”: this is State Department’s plan to topple Arab secular regimes and replace them with a Muslim Brotherhood.
• The “Movement of the 15M”, in Spain: this challenges the economic policies of the big parties, declaring, at the same time, however, its attachment to European institutions.
• “Tahir Square” in Egypt: this is normally considered as a place where the Arab Spring took place. Yet to take it out of this category, all we need to do is to refer to its occupation by Mohamed Morsi’s Muslim Brotherhood.
• Gezi Park: this was the only secular movement out of the four, but was orchestrated by the CIA to warn Recep Tayyip Erdoğan. The latter took no account of this warning.

Behind these four and still many others, hides the same organizer: Team Gene Sharp, initially baptized the Albert Einstein Institute [3] but today known as the Centre for Applied Nonviolent Action and Strategies (Canvas). It is 100% funded by the United States [4]. Gene and his people are well organized, directly linked to Nato and divinely-inspired horror at the spontaneity of the times of Rosa Luxembourg.

The non-intervention of the police headquarters, the discreet support that the EU gives Radio Debout, and the inclusion among the organizers of personalities, formerly supporters of Action directe [5] does not seem to pose any problems for the participants.

Clearly, the reader will wonder if I am not reading too much into things, by seeing Washington’s hand at play also here. But the manipulations of Team Gene Sharp in 20 countries are widely confirmed and have been studied by historians. Futhermore, tis not I, but rather the organizers of “Nuit debout” that refer to the actions of this team.

Team Gene Sharp intervenes with game plans that are always the same. Depending on the context, the demonstrations aim at regime-change or, in contrast to this, sterilizing the opposition. It is the latter objective that is being pursued here. Since 2000, this team has been using a logo borrowed from the communists to fight them more effectively: a clenched fist. Clearly this is the symbol that “Convergence des luttes” has chosen. 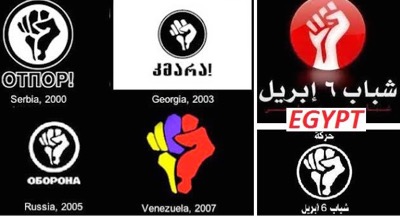 The slogan “Nuit debout”, “Don’t go home”, is novel in the long line of Team Gene Sharp’s operations, yet completely typical of its modus intervendi: this slogan does not include any positive claim nor does it propose anything. Its purpose is simply to get the crowds into the streets and distract the media while really serious events are unfolding elsewhere.

Even the very principle of “Nuit debout” completely excludes workers from participating. You’d have to be a sleepwalker, to able to spend the night engaged in serious discussion. The “employees and temporary workers”, those that the movement purports to defend, have to go to work the next morning and cannot afford the luxury of sleepless nights.

There are no “Nuit debout” committees — that direct their minds to anything other than the devastation of exploitation and imperialism — that are going to put an end to France being dominated by a coterie of the wealthy, that has sold out France to the Anglo Saxons and has just authorized the Pentagon to set up military bases here. To imagine otherwise would be to believe have faith in a history where you can sleep while on your feet.

[3] “The Albert Einstein Institution: non-violence according to the CIA”, by Thierry Meyssan, Voltaire Network, 4 January 2005.

[5] Direct Action was a group of the French Extreme Left, which organized 80 attacks and assassinations in the eighties and which was clearly set up by Gladio, read: Nato Secret Services.

Source : “A movement to ensure while on our feet, we are asleep ”, by Thierry Meyssan, Translation Anoosha Boralessa, Voltaire Network, 10 April 2016, www.voltairenet.org/article197138.html

Source : “A movement to ensure while on our feet, we are asleep ”, by Thierry Meyssan, Translation Anoosha Boralessa, Voltaire Network, 10 April 2016, www.voltairenet.org/article197138.html