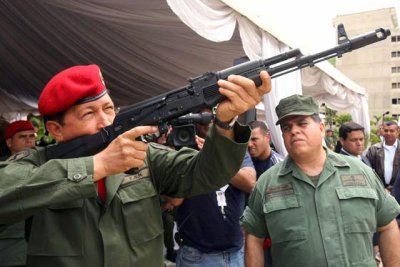 It was on 28 July 1954, in Sabaneta de Barinas, Venezuela that one of the most important revolutionary leaders in Latin America’s history was born: Hugo Chávez Frías.

His mother, Elena Frías, brought him into the world, yet only remained with him until he was delivered. Story has it that, as a child growing up, he enjoyed listening to the stories related by his grandmother about the heroes that liberated his country and those who confronted the injustices inflicted by dictatorial governments in the period before the Republic of Venezuela was established; leaders that paid scant regard to the Bolivarian ideal and almost bowed in deference to the new colonialism that the United States and the European powers, helped out by servile, local oligarchies, put in place in Latin America.

Hugo Chávez spent his first years in this environment where traditions and legends were glorified through the gentle lilting voice of his paternal grandma, Rosa Inés. During this period he became acquainted with the exceptional deeds of General Páez and his cavalry of plainsmen that, with their spears, could conquer the best cavalrymen that the Spanish army had. He also became familiar with the guerrillas of the Maisanta, who had risen up against the dictatorship of Juan Vicente Gómez.

As Chavez himself would say, it was in fact Grandma Rosa Inés who advised him of his difficult path as a military and revolutionary and accurately predicted the course his life would take. And this she did when he, the future president of Venezuela, was just 21. Having graduated from military academy with the ranking of a sub-lieutenant, he had a stellar development that, in 1982 led him to establish within the army, the Bolivarian Revolutionary Movement 200 (MBR200). Heading this movement, he commenced another attempt to “take heaven by storm” on 4 February 1992.

On this day, dressed for battle, he took his gun and headed a rebellion with forces of the commanders who took orders from him in Maracaibo, Caracas, Valencia and Maracay. His aim? To assume power and begin a revolution that would transform his country.

The movement failed and those who had participated in it were arrested. Yet on this day, TV enabled the Venezuelan people to get a glimpse of and get to know that young lieutenant called Hugo Chávez Frías, who announced that “for now” the objectives of the movement had not succeeded; that this was a failure that rested squarely on his shoulders, and that his companions should now return to the barracks.

The media, far from rubbishing the revolutionary leader, validated him, asserting that he was supported by the people. Thereafter he just kept getting more popular. When he was finally released from prison, thanks to the pressure applied by the people against the discredited President Carlos Andrés Pérez, he toiled with every sinew in his body to building a mass movement.

Within a short time, he was transformed into the people’s candidate in the presidential elections held on 6 December 1998. Chavez emerged victorious, obtaining 56.24% of the votes cast in a transparent electoral process, untainted by corruption; a process in which the people fully participated, which paved the way for a democratic tradition for more than 20 ballots, realized and won by an immense majority in support of the Chavista project.

The Bolivarian Revolution will change forever the region’s stagnant political context, destroying the neoliberal offensive and demonstrating while the Left is in crisis, dealt an almost fatal blow by the dissolution of the USSR and its European Socialist allies, that the paths leading to substantive social transformation maintain their vigour, and still bring hope to oppressed people wherever they may be in the world.

As the Cuban leader Fidel Castro said, in all Cuba’s history, there had been no better friend to the Cuban people than Chavez, who has also been an extraordinary support for Latin American integration and solidarity. This is why, right from the beginning, Chavez was able to successfully counter the destabilizing and economic aggressions waged by Yankee imperialism and those oligarchs in the Yankee backyard that were allied to it.

In 2011, Sabaneta’s boy was diagnosed with cancer, too timely for the interests of US imperialism. Yet with his extraordinary strength and courage, he got on top of it, and exhausted his final energies on the Bolivarian movement, winning the Presidential Elections on 7 October 2012, with a mandate for the period 2013-2019. Yet his lot was death on 5 March 2013.

Today, the fatherland of Hugo Chávez faces an offensive led by the US government, its troops and right wing media that feeds an internal terrorist minority, for whom destruction awaits, dealt out by the followers of the Eternal Commander…., that poor boy from Sabaneta who dreamed of having a gun in his hand so that he could stand shoulder to shoulder with the mythical heroes of his country’s past, brought to life through the tales of Grandma Rosa Inés.