So what does President Macron have up his sleeve?

The French people are troubled as it dawns upon them — but a bit too late — that they don’t really know who is their new President, Emmanuel Macron. By interpreting Macron’s recent declarations and his acts in light of the report that he drafted in 2008 for the Attali Commission, Thierry Meyssan anticipates in which direction he is “En marche !”. 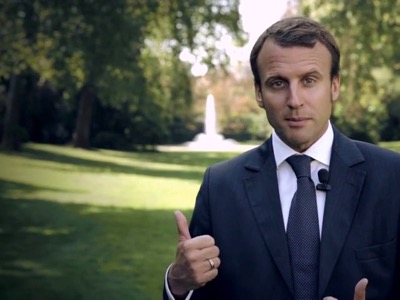 Following Jacques Chirac’s cerebral accident, France has been without a president. For the final two years of office, Chirac let his ministers Villepin and Sarkozy tear each other part. Next: the French people elected two personalities that failed to do justice to the presidential office: Nicolas Sarkozy and François Hollande. The final move: the “people” chose to bring Emmanuel Macron to the Élysée. Thus their thinking was that this impetuous young man was capable of re-seizing the helm of the governing ship.

Contrary to the election campaigns that preceded it, the 2017 electoral campaign did not provide an occasion to debate fundamental issues. At the most, we will be able to note that all the “small candidates” (by which I mean those who were not supported by big parties) in the electoral campaigns were attacking the European Union while all the big candidates exulted it, paying the greatest deference to it. The thrust of the campaign was a daily briefing slamming corruption alleged to be taking place among the political class in general, but targeting the favourite candidate, François Fillon; a narrative typical of the “coloured revolutions”. As in all these models without exception, public opinion reacts by advocating “dégagisme” [Ndt: destroying the existing power structure and replacing it with a new one for no good reason]: everything belonging to the ancien regime is corrupt while everything belonging to the new regime was proper and full of virtue. However, it had never been established that any of the crimes that everyone was talking about had actually taken place.

In the previous coloured revolutions, public opinion took between three months (the Cedar Revolution in Lebanon) to two years (the Revolution of the Roses in Georgia) before waking up and discovering that it had been manipulated. Public opinion then ebbed back to what was left of the team it had previously supported. So, those who organized the coloured revolutions were skilful in not delaying to bring about the change that their sponsors intended to be brought about in these institutions.

Emmanuel Macron announced to us in advance that he was going to fast track Labour Code (Code du Travail) Reform. His hope was to implement this reform using “orders” [ordinances] as the appropriate legislative instrument. Furthermore, he announced important institutional reforms: reshaping the Economic and Social Council, reducing —“dismissing” we should say in managerial terms— half the number elected at every level and elements of “moralisation” of political life. All these projects can be brought under the umbrella of the report published by the “Commission for the liberalization of growth in France in 2008”. The chair of this Commission was Jacques Attali and Emmanuel Macron, the under Secretary-General.

As far as the Labour Code goes, there is in actual fact broad consensus that it should be adapted to contemporary economic situations. However, the preparatory documents available would suggest that the government is not a party to this consensus. It envisages abandoning the Roman legal system and replacing it with the system currently in force in the United States. Such a move would remove a priori controls, allowing an employee and his boss to enter into bilateral negotiations and conclude a “contract” that was contrary to the law. And so as to eliminate any doubt as to the breadth and importance of this reform, it would require reforming the educational system enabling it to produce bilingual students (French/English) by the time they had finished primary school.

Yet not once has this change of model been debated in France. At the very most, it was brought up during the parliamentary debates on the El-Khomri-Macron Law of 2016. Some observers had pointed out that the pre-eminence of the enterprise on the negotiation of agreements entered into by its branch, opened a possible swing towards US law.

This choice is all the more surprising as while the United States constitutes the world’s number one financial power, it has, for the most part, been overtaken on the economic level by countries as diverse as China or Germany. Furthermore, if the United Kingdom respects the vote rendered by its citizens and pursues its exit from the European Union, the latter would no longer be dominated by the Anglo-Saxon financial model but by the German economic model.

As for institutional reform, it is striking to observe that even if the reforms envisaged by President Macron may turn out to be excellent, the French were not expecting such reforms to take place. Until now, no one had slammed the plethora of parliamentarians or councillors. In contrast, a number of reports has denounced the build up of administrative strata (municipalities, communities of municipalities, departments, regions, State) and the proliferation of committees that are not really in the state’s best interest (“Comités Théodules”).

In actual fact, President Macron is wearing a mask as he makes his way forward. His medium-term objective, spelt out in broad terms in 2008, is to abolish municipalities and departments. What he wants to do is to iron out the difference between the local French communities, bringing in the model already imposed elsewhere in the European Union. The Élysée, rejecting the historical experience of the French people, considers that they can be governed just like all the other Europeans.

The reform of the Economic and Social Council is vague. At the most, we know that it would do two things at the same time: first, dissolve the countless “Comités Théodules” and second, entrust social dialogue to the Economic and Social Council. Charles de Gaulle’s failure to achieve this in 1969, makes us think that if this reform were carried out, it would not be to resolve a problem, but rather to bury it once and for all. In actual fact, at present all levels are currently engaged in social dialogue; yet the proposed reform of the Labour Code will deprive this dialogue of a concrete purpose.

In 1969, President De Gaulle had no option other than to abandon once again, his pet project of “participation” that is, redistributing capital growth among two sets of people – the owners and workers. What de Gaulle suggested instead was to inject the world of work into the legislative process. How so? His thinking was to merge the Economic and Social Council with the Senate, enabling the Superior Chamber to pull together both regional representatives and representatives of the people from the professional world. In particular, he proposed that the power to draft laws should not be held by this new Chamber; but, that the new Chamber be given the power to render an opinion on every text before the Assemblée nationale debated it. Thus de Gaulle was giving the power of legislative opinion to rural and liberal organizations, to trade unions (both for workers and managers), to universities, family, social and cultural associations.

Before his voters are aroused from their slumber, President Macron intends to drive through two priorities that can be summarized as follows:

let principles of US law govern the labour market;

bring the local authorities in line with European norms and bring organisations, representative of the Labour World, into an assembly that was purely honorary.

In addition to blotting out all traces of several centuries of social battles - something that will benefit capitalists alone - Emmanuel Macron should thus distance the elected from those who elected them and discourage the latter from investing in rei publica.

On the same subject:

Source : “ So what does President Macron have up his sleeve?”, by Thierry Meyssan, Translation Anoosha Boralessa, Voltaire Network, 8 August 2017, www.voltairenet.org/article197384.html

Who does Emmanuel Macron owe?

According to Emmanuel Macron, the days of popular sovereignty are over

Source : “ So what does President Macron have up his sleeve?”, by Thierry Meyssan, Translation Anoosha Boralessa, Voltaire Network, 8 August 2017, www.voltairenet.org/article197384.html