For Xu Chuanbo, India has made a miscalculation hoping Japan’s support against China. Tokyo is doing everything possible to improve its relations with Beijing, especially as he paradoxically needs him to protect himself from a possible North Korean strike on Guam. 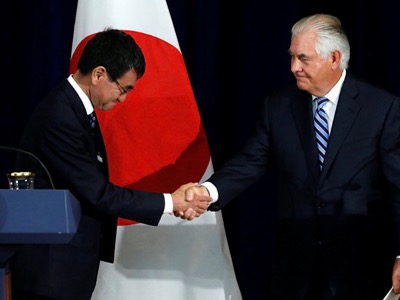 Complex personality, Taro Kono was formed by both the Liberal Democratic Party of Japan (whose father was the president) and by the Democratic Party of the United States. He campaigned for the Japanese army to intervene abroad, but also against the Iraq war and for the widespread banning of the atomic bomb. Considering that the Sino-Japanese conflict has been greatly exaggerated by the United States in their own interest, he is in favor of a rapprochement with Beijing. He actively supports the North Korean opposition. To prevent this position being interpreted as anti-Korean, he pledged never to visit the Shrine of Yasakuni and succeeded in persuading Prime Minister Shizo Abe to follow his example. He is the new Japan Foreign minister since August 3, 2017.

Japanese Prime Minister Shinzo Abe is planning to visit India in September to discuss strengthening bilateral cooperation in Asia-Pacific security, atomic energy and high-speed railway technology with his Indian counterpart Narendra Modi. However, since the visit is taking place while the Doklam standoff continues, it has therefore triggered widespread speculation as to what else may be discussed.

Chinese and Indian troops have been locked in a military standoff in the Doklam region, which borders Bhutan, since June. India has been extremely rude and unreasonable on this issue. It is an undisputable fact that Doklam is a part of China’s territory. Although India regards Chinese construction in the region as a threat, this cannot be used as an excuse for Indian troops to trespass into Chinese territory.

New Delhi’s decision to cross the border is a brutal infringement of China’s sovereignty and such an aggressive act will undoubtedly get little support from the international community. A number of countries have already declared that they will remain neutral on the Doklam issue, and even Bhutan, a country India claims is under its protection, has kept silent on the issue. This has drawn India into an awkward situation in which it is badly in need of support.

The Times of India reported earlier that Japan’s ambassador to India, Kenji Hiramatsu, had said there should be no attempt to change the status quo on the ground in Doklam by force. These remarks were interpreted by India, a country eager for international support, as support from Japan.

But this is not the case. The US has expressed its hope for the dispute to be settled peacefully several times, and this is also what Japan wants. Both Washington and Tokyo, always supportive of New Delhi, have this time exercised restraint by not showing any real support for New Delhi on the Doklam issue.

Currently, the US and Japan are dealing with some serious internal and external crises. The US is currently mired in issues involving racial discrimination with the public strongly condemning white supremacists. This has led the Trump administration to become the target of public criticism. A number of high-level officials have been forced to resign, but this has done little to save the Trump administration from a political crisis. Meanwhile, Japan’s Abe has been hit by a number of scandals, and as a result, is now at an approval rating of 26 percent, his lowest ever. Although Abe has reshuffled his cabinet, this has failed to boost his approval rating.

The North Korean nuclear and missile crisis is another issue of concern for the US and Japan. In the past, Washington and Tokyo have used Pyongyang’s nuclear tests as an excuse to strengthen their military presence in East Asia, but now a nuclear crisis seems to actually be at hand.

North Korea previously threatened to fire missiles toward the US territory of Guam, which would mean those missiles would fly across Japanese territory. Although this didn’t happen, Pyongyang’s military progress has become a concern for Washington and Tokyo. It seems that North Korea, with its strengthening military capability, is becoming the major "threat" in their eyes.

The US and Japan are seeing tough problems from both within and without. They currently have no intention of getting involved in other countries’ disputes. At the same time, they need China’s support and cooperation concerning North Korea. India has deliberately provoked China, and for this reason will be shunned by the US and Japan.

For Japan, stronger cooperation with China is an irreversible trend. Taro Kono, known for his pro-China stance, was appointed the country’s foreign minister during the cabinet reshuffling. Also worthy of note, no cabinet member visited the Yasukuni Shrine on August 15 this year, an unprecedented move for Japan’s ruling party. Obviously, Abe is showing goodwill to Beijing, and thus is unlikely to show diplomatic support for New Delhi during his upcoming India visit.

For Abe, Japan has a friendly relationship with India, and so will have to make a friendly gesture of some kind to Modi. However, Japan doesn’t want to escalate the Sino-Indian dispute. If China continues to have to expend time and energy dealing with the Doklam standoff, this will not be favorable for finding a solution to the North Korean issue.

It should be noted that Japanese media outlets have exercised restraint when reporting on the Doklam standoff, and this, to some extent, reflects the intentions of the Japanese government.

Therefore, India may receive only limited support from Japan. New Delhi may have set out trying to benefit from its provocations against China, but has now been drawn into a diplomatic quagmire through its own actions.