“The Hub for Nato’s strategic leadership for the South”! This is the delightful name of the gigantic intelligence centre that Nato has just erected. What exactly is the point of this centre? Nothing less than to co-ordinate each of the Pentagon’s covert actions. In this article, Mario Dinucci analyses its structure. He shows that to start with, this centre will cover all of Africa (apart from South Africa) and the entire territory (apart from Israel) that the enlarged Middle East now covers. While the Centre receives some of its funding from European states, its mind is controlled entirely by the United States. 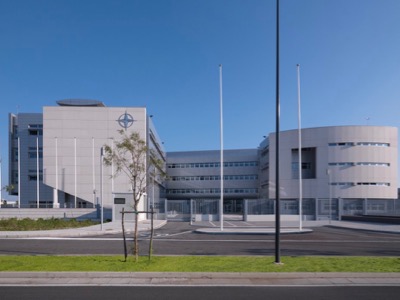 On 4 September 2017, a ribbon-cutting ceremony took place at Lake Patria (Naples), where the Joint Nato Forces Command (Jfc Naples) is based. It was at these headquarters (which cover an area of 85,000 m2 and accommodates a bulked up staff of 2,500 soldiers and civilians), that the “Hub for Nato’s Strategic Leadership for the South”(Nsd-S Hub) was inaugurated. Strongly supported by Minister Pinotti, this Hub is mandated to “gather information and analyse a wide range of issues relating to destabilization, terrorism, radicalization and migration”. In other words, it is an intelligence-gathering centre, whose activity “focus on Southern regions, such as the Middle East, North Africa and Sahel, Sub Saharan African and adjacent areas”.

The Nato Joint Forces Command, that the new Centre for Intelligence forms part of, is under the leadership of a US admiral appointed by the Pentagon (who right now is Michelle Howard of the U.S. Navy) who simultaneously heads the U.S. Naval Forces in Europe (which are headquartered at Naples-Capodichino and the Sixth Fleet, docked at Gaeta) and the U.S. Naval forces for Africa. The mandate of JFC Naples is “to plan and lead military operations in the areas of responsibilities of the Supreme Allied Command in Europe and beyond such areas”. The Supreme Allied Command in Europe – currently Curtis Scaparrotti – must always be a U.S. General appointed by the US President. This general also holds the office of “Head of the US European Command”, whose operational area includes the whole of Europe and the whole of Russia (including the Asian part), plus several countries that form part of Western and Central Asia: Turkey, Israel, Georgia, Armenia and Azerbaijan.

Since the new “Hub of Nato Strategic Leadership for the South” is led by Admiral Howard, who in turn, takes orders from General Scaparrotti, this Hub is in fact integrated into the Pentagon’s chain of command and prioritizes US strategy. It is on the basis of the intelligence gathered (or fabricated) by Nsd-S Hub that Nato will make a decision on its military interventions in the Middle East, Africa and adjacent areas.

The Nato Centre for Intelligence benefits from collaboration with universities (such as University College London), think tanks (Overseas Development Institute), UN organizations (including UNICEF and the International Organization for Migration) and non-governmental organizations (including Oxfam and Save the Children). Such organizations, as well as being used as the “humanitarian” face of the Nsd-S Hub, risk, through agents that have infiltrated them, being implicated in espionage and other secret operations led by the Nato Intelligence Centre in Middle Eastern and African countries.

The issues that this new intelligence centre will deal with – destabilization, terrorism, radicalization, migration– are all too familiar to the headquarters on Lake Patria. Indeed, it was Nato that destabilized Libya, feeding its domestic terrorism and radicalization, and then demolished the Libyan State with a war, which had disastrous consequences and provoked migration. In both this war and the covert war waged in Syria, the Nato Command at Naples has played and is playing a primary role. Look: this was the Command that in 2011 led an air-naval attack which hammered Libya with more than 40,000 bombs and missiles. Yet it is this same Command that is now defined by Pinotti as the “Hub for the South” with the mission of “reconstructing failed States”.