Manolis Glezos, the same person whom Charles de Gaulle used to call the “the first person in Europe to resist”, has written an open letter protesting that his country, Greece is being pillaged by certain French investors, with the French President Emmanuel Macron, leading the way. 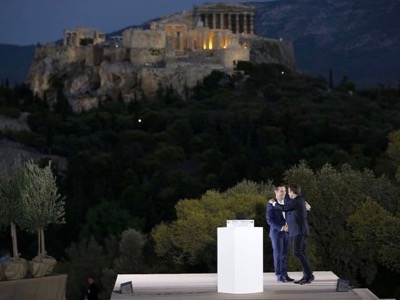 France, its people, its struggles and its people’s representatives have always been well received by the Greece people.

I will always recall the enormous contribution made by France in its official capacity, under the leadership of General de Gaulle and the French people: it was France who prevented death penalties, inflicted on us by the Greek regime following our civil war, being executed.

But today’s visit is a case apart.

Greece, now completely powerless thanks to the memorandums, is welcoming a most cynical financial invasion, personified by a group of investors accompanying the French President.

That part of our infrastructure that has still not been transferred to them, is now lining up to be transferred. We are not selling it, we are abandoning it. They are not investing; they are simply increasing their own wealth by sucking all traces of life from the Greek people.

This assessment is so easy – the maths is so easy.

And all this is occurring under a regime of blackmail, unprecedented in history. It occurs with the sword of the master-blackmailer on the table, which accompanies a cynical « Vae Victis ».

Nothing is going to change the esteem that we nurture for the French people. However, this does not mean that we will accept as a fait accompli what will be agreed between the groups of entrepreneurs that accompany the President of the French Republic and the Greek Prime Minister.

This is why I am not accepting the invitation to attend today’s desecration of the Pnyx.

Source : ““I am not accepting the invitation to attend today’s desecration of the Pnyx””, by Manolis Glezos, Translation Anoosha Boralessa, Voltaire Network, 12 September 2017, www.voltairenet.org/article197839.html

Source : ““I am not accepting the invitation to attend today’s desecration of the Pnyx””, by Manolis Glezos, Translation Anoosha Boralessa, Voltaire Network, 12 September 2017, www.voltairenet.org/article197839.html