Following the organization of the coup d’État in Ukraine, the installation of Nazis in Kiev and the independence of Crimea, Nato is feeding the paranoia of its East European members. Not only did Moscow protect the Crimeans from a government that had Nazis among its members, but conquered by force and annexed this territory that historically had belonged to the Russia. It is on account of this narrative that Washington is succeeding to occupy Eastern Europe by force, without its people, now subdued, protesting. In contrast, the people are alarmed about the Russian – Belarusian military manoeuvres. 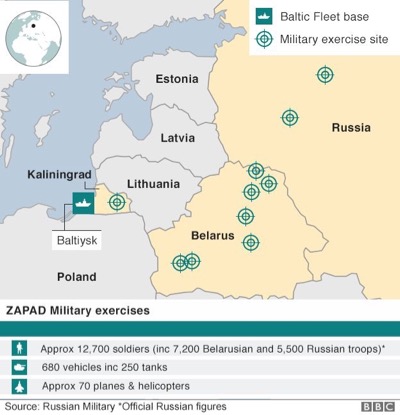 The Western Press is conjuring all sorts of worrying hypos according to which the military exercises “Zapad-2017”, would provide an occasion for Russia to invade the states forming Nato’s Eastern Flank. But no one has bothered to study the script for these exercises; nor does anyone have the requisite training to analyse it. Let’s examine what is going on. The Russian-Belarusian military exercises, “ Zapad-2017”, are taking place from 14 – 20 September 2017. Their aim:
“to improve the training and use of groups of armed forces to ensure the military security of a strategic outpost for the collective defence of Russia and Belarus”.

The script for the exercises requires Special Force Units to massively infiltrate the territory of Belarusian and the Russian enclave of Kaliningrad. These forces will act like terrorists. They originate from three fictional countries: Vajsnoryja, Vesbaria and Lubenia. On the map you’ll find Vesbaria on the territory of Lithuania and Latvia and Lubenia spans Lithuania and Poland, all in actual fact, members of Nato. The terrorists that have infiltrated have taken control of important targets in Vajsnoryja, a zone situated in North-West Belarus.

Phase One: separate Vajsnoryja from the rest of Belarus. This will serve two objectives:
a/ isolating acts of sabotage aimed at aggravating the socio-economic situation in the country; and
b/ enabling a coup d’etat to be executed in Minsk. The ultimate aim is to use the Belarusian territory as a launching pad for a massive military invasion of Russia.

The concept of the “Zapad-2017” exercises rests on military measures capable of destabilizing Belarus and liberating the occupied region of Vajsnoryja. This is why Phase One aims at verifying if the Russian and Belarusian military and air forces can maintain their air supremacy and block the initial corridor from infiltration of terrorists and supplies of arms and ammunition.

Phase Two: This can be broken down into two steps. Step one is to verify if the airborne units can intervene at a long distance from their bases; step two is to isolate and encircle the groups of terrorists that have infiltrated. This operation assumes a manoeuvre by back-up forces, both on land and air, to block routes that would allow the terrorists to retreat to the Baltic Sea.

Phase 3: to encircle the terrorists and to physically eliminate them. What conclusions can we draw?

1/ The sole purpose of these exercises is DEFENSE. They are confined to West Belarus and Russia. They are taking place exclusively on the seven land polygons in Belorussia and three in Russia, where military observers from every Nato state have been invited. They involve 12,700 soldiers (7,200 in Belarus and 5,500 in Russia), 680 vehicles of which 370 are armoured (including 250 tanks), 200 artillery guns, 70 helicopters and planes and 10 war ships [1].

2/The need to plan these exercises stems from Russia’s fear of a Nato military invasion from the Baltic states and Poland:
• To strengthen security in these states, Nato has recently deployed the US Aviation’s army’s 10th brigade — with more than 60 planes — and the US’s third armoured Brigade;
• In the three Baltic states, Nato members are operating a rota to provide a service with a squadron of fighter planes; and
• Nato has established a force for super-rapid intervention, by seven member states with 10,000 soldiers specially trained and allotted to act on two coasts: the Baltic coast and the coast of the Black sea.

3/There is a rational basis for Russia’s fears: according to the Nato doctrine, Moscow is placed in the theatre of European military operation” on the Belarusian strategic route. This route begins at Berlin, crosses the territory of Poland, the enclave of Kaliningrad and Belarus, through Moscow, and continues right up to Samara (formerly Kuibishev). Armoured vehicles can advance rapidly on this vast plain. It is clear that this route is conceived to invade Moscow. The strategic objectives are the vital economic and political concentrations (containing economic complexes, energy sources, raw materials, networks for transporting energy, etc.). Their conquest or control, even temporarily, automatically leads to an adjustment in the balance of power in any theatre of military operation.

For example, during Operation Barbarossa during the Second World War, launched on 22 June 1941, the Core Group of Armies led their offensive on the strategic Belarusian route, with 50 German divisions concentrated in Poland, to conquer Moscow: the strategic objective par excellence.

4/Russia has repeatedly declared that the 5 billion US dollars (according to Victoria Nuland, the former US Under Secretary of State for Europe [2]) for funding the Euromaidan at Kiev led to a coup d’etat, resulting in Ukraine being demoted from Russia’s friend to Russia’s enemy. This situation allows the United States to envisage a future military invasion of Russia by Nato. This hypo is not picked from the air, for the invasion could borrow the Ukrainian route; certainly the best route for the theatre of military operation in Europe. This strategic route begins in Munich in Germany, crosses Poland, Ukraine, South Western Russia, passes to Volgograd (formerly Stalingrad), then moves along the Volga up to its opening into the Caspian Sea.

5/ The Barbarossa plan for invasion of the Soviet Union during the Second World War had entrusted the conquest of Ukraine to the Group of armies in the South. This group was composed of 57 German, Italian, Hungarian and Romanian divisions. On 26 January 1943, part of these forces (totalling 330,000 soldiers) had been encircled around Stalingrad, destroyed or forced to return to the Soviets. If Ukraine had to be chosen as the launching pad for the Nato offensive, that would have the advantage of allowing Nato to avoid fighting in the Carpathian mountains, which reach a height of 2 061 metres.

[1] So these exercises do not have an important dimension. They are bellow the threshold figure of 13, 000 men, above which the member states of the OSCE, which include Belorussia and Russia, undertake to invite all their partners in the organization as observers.

Javier Solana’s comment on the conduct of the Presidential elections, in Belarus