Kurdistan – what the referendum is hiding

In a world where images count more than realities, the Press is presenting us with a democratic referendum for the independence of Iraqi Kurdistan. However, despite the fact that, constitutionally speaking, this referendum should be held throughout Iraq, and not only in the independentist zone, several million non-Kurdish voters have already been ejected from their homes and will never be able to return. In the polling stations, only the independentists will be supervising the legality of the vote. Thierry Meyssan reveals this fraud and the interests it is hiding. 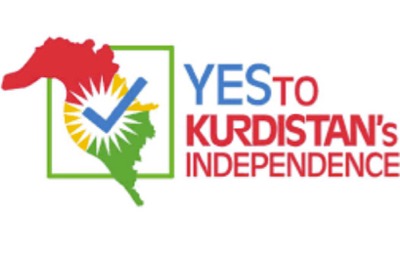 On this electoral poster, the map of « independent Kurdistan » overflows from the autonomous Iraqi region onto Iraqi and Syrian territory.

The referendum for the independence of Kurdistan is a fool’s game. The United States, which secretly supports it, claims in public to oppose it. France and the United Kingdom are doing the same, hoping that Washington will make their old dreams come true. Not to be outdone, Russia is hinting that although it is against any unilateral change, it might support independence… as long as everyone accepts the independence of Crimea, which means accepting its attachment to Moscow.

The degree of hypocrisy of the permanent members of the UN Security Council is such that they have so far been unable to give a ruling on this question, despite their apparent unanimity. They have not adopted any resolution (in other words, a text with international force of law), nor Presidential declaration (in other words a position common to the members of the Council) - nothing except an insipid Press release during their meeting on 19 September [1].

Currently, there exist eight non-recognised States - Abkhazia, North Cyprus, Nagorno-Karabagh, Kosovo, Ossetia, Western Sahara, Somaliland and Trasnistria. Two European regions are also hoping for independence - Catalonia and Scotland. Any modification of the status of Iraqi Kurdistan will have consequences for these ten countries.

The independence of Iraqi Kurdistan would be a tour de force, insofar as it would mean displacing Kurdistan, as it was recognised by the Sèvres Conference in 1920, from its current location on Turkish territory to Iraqi territory. Of course, everyone has become used to using the title Kurdistan to indicate this region, which, since 1991, has been subject to a slow and continual ethnic cleansing by London and Washington.

During « Desert Storm », this region was mainly inhabited by Iraqi Kurds. London and Washington made it a no-fly zone against President Hussein. They forced into power one of their collaborators from the Cold War, Massoud Barzani, who initiated the displacement of the non-Kurdish populations. The same Barzani, although he was twice re-elected since then, has maintained his grip on power for more than two years without a mandate. The National Assembly, which demanded his departure, has met only once since the end of his mandate to vote the principle of the referendum, but in the absence of Goran - a party which has continually denounced the feudal system of the Barzanis and the Talabanis, and the nepotism and the corruption which are the direct result. In fact, Massoud Barzani has been in power, without interruption, for the last 26 years.

From 1991 to 2003, the non-Kurds progressively left the no-fly zone, so that the region was proclaimed, with the defeat of President Hussein, as Iraqi Kurdistan.

On 1 June 2014, the secret services of Saudia Arabia, the United States, Israël, Jordan, the autonomous region of Iraqi Kurdistan, Qatar, the United Kingdom and Turkey organised, in Amman, (Jordan) a preparatory meeting for the invasion of Iraq by Daesh. We know of the existence of this meeting by the Turkish document that Özgür Gündem published immediately [2]. This daily newspaper – with whom I collaborated – has since been shut down by the « sultan » Recep Tayyip Erdoğan [3].

According to this document, it was agreed to coordinate Daesh and the region of Iraqi Kurdistan. The former launched a lightning offensive to capture Mosul, while the latter grabbed Kirkuk. Four days earlier, President Massoud Barzani had travelled to Jordan to talk to the participants of this meeting. He was careful not to take part in the meeting himself, but was represented by his son Masrour, the head of his own Intelligence services.

When Daesh invaded the part of Iraq that the United States had previously attributed to him, they profited from the occasion to imprison the Yezedis and bind them into slavery. Most of the Yezedis are Kurdish, but in conformity with the Amman agreement, the neighbouring Barzanis did not intervene, even when some of them fled into the Sinjar mountains. Those who fled were finally saved by the commandos of the Turkish PKK. The Turkish Kurds saved them all, whether they were Kurds or not. They used this victory to demand their recognition from the Western powers (who, since the Cold War, has viewed them as terrorists). The current revision of this affair by the Barzanis cannot erase their crime against their own people [4].

Another famous Kurd took part in the meeting in Amman – the Islamist Mullah Krekar. He was imprisoned in Norway, where he was serving a five-year sentence for having threatened, on TV, to kill Prime Minister Erna Solberg. He travelled to the Amman meeting in a NATO plane, and was taken back to his cell in the days that followed. He then revealed his allegiance to Daesh. He was not condemned for belonging to a terrorist organisation, but was offered a two-year remission of sentence and was freed. He then went on to direct Daesh in Europe, from Oslo, under the protection of NATO. Clearly, the Stay-behind network of the Atlantic Alliance is still operational [5]

Having annexed Kirkuk, the regional government of Iraqi Kurdistan extended to their zone the ethnic cleansing that its members had been perpetrating in the no-fly zone between 1991 and 2003.

We can relax – the immovable Barzani has assured that he will not implement measures of retaliation against those who vote “No”.

The non-constitutional President Barzani has announced that all the populations of Iraqi Kurdistan and the annexed territories may participate in the referendum. Together, all these regions housed more than twelve million citizens in 2013. But today, three million non-Kurdish citizens have been forced to flee. So only a chosen number of electors are called to vote on the future not only of the place of the expelled legitimate inhabitants, but also that of all other Iraqis.

In order to participate in the referendum, one must -

live in Kurdistan or the annexed regions ;

to have been registered before 7 September on the electoral lists ;

and for those who are refugees abroad, to have been registered for the electronic vote … which supposes that they must first present their papers to the electoral authority of Kurdistan, from which they have been expelled.

Independence will give the Barzani and Talabani clans further means with which to pursue their affairs. It will also offer Israël the possibility of implementing certain of its military objectives. Since the end of the 1990’s and the development of missile weaponry, Tsahal has abandoned its strategy of occupying the « border regions », meaning the territories just outside its frontiers (Sinaï, Golan, South Lebanon). On the contrary, it intends to neutralise Egypt, Syria and Lebanon by taking them from behind. This is why Tel-Aviv supported the creation of South Sudan, in 2011, in order to place missiles pointed at Egypt, and is today supporting the creation of Kurdistan in order to place missiles pointed at Syria.

According to Israel-Kurd, which is widely quoted by the Turkish Press, Israëli Prime Minister Benjamin Netanyahu promised Massoud Barzani to transfer 200,000 Israëlis to the new state to « help » with its administration [6].

According to this logic, the ideal for Tsahal would be to extend the territory of Iraqi Kurdistan not only to Kirkuk, but to Northern Syria. This is the purpose of the YPG and its « Rojava ». This self-proclaimed autonomous state is a long corridor which links Iraqi Kurdistan to the Mediterranean, and is occupied by US troops who are illegally installed in several military bases.

Eight months before the Amman meeting, a Pentagon researcher, Robin Wright, confirmed her country’s agreement with this project [7]. At that time, the Barzanis were still claiming that they defended all Kurds, including those who were living in Turkey and Iran. Mrs. Wright carefully explained that such a project was impossible, but published her map of « Sunnistan », attributed to Daesh, and « Kurdistan » attributed to the Barzanis in Iraq and Syria.

Incidentally, in August, the Pentagon published a call for tender for the buying and transfer of 500 million weapons and ammunition, mainly ex-Soviet [8]. The 200 first trucks were delivered to the YPG at Hasakah, on 11and 19 September, via Iraqi Kurdistan, without being attacked by the jihadistes [9]. The Russian Minister for Defence has just made public satellite photos of a camp of US special forces in the middle of Daesh territory, living quite comfortably with the Kurds and the jihadists [10].

So since we are told that this « independent Kurdistan » is a democratic Kurdish project, why would we doubt it?

[3] Those journalists who escaped the purge and managed to flee, created the electronic daily Özgürlükçü Demokrasi outside of Turkey.

[9] “200 lorries of arms and ammunition: delivery by the Pentagon to the YPG”, Translation Anoosha Boralessa, Voltaire Network, 23 September 2017.