The State Department and President Trump have been spitting out curses against Hezbollah and Iran – this could lead us to fear a break in the 5+1 agreement. But for Thierry Meyssan, while the worst may still happen, it is far more probable that, once again, Washington is staging a phony quarrel in order to better manipulate its Israëli and Saudi allies. 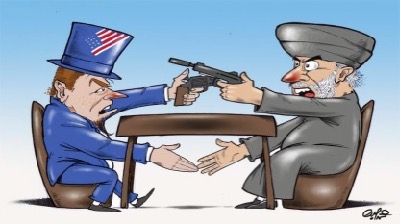 The US President’s speech on Iran was preceded by a Press conference at the State Department accusing Hezbollah of exporting terrorism all over the world on behalf of Teheran [1]. To show that the US was ready to put its money where its mouth is, a reward was offered for the arrest of two of its commanders. But - surprise! – not a word about Hezbollah’s victories against the jihadists, nor about the 800 million dollars that Supreme Leader Ali Khamenei has just offered to the Lebanese Resistance [2].

President Trump then took the floor and wasted no time in loading insults on the inheritance of Imam Ruhollah Khomeini, the Revolutionary Guard, and the Supreme Leader [3].

He proffered all sorts of weary old accusations which have long been disproven, and laid the foundations for accusations that they are responsible for the resurgence of Al-Qaïda.

Even before his speech had come to a close, oil was already up by 85 cents per barrel, since the market was betting on the cancellation of Iranian oil investments. In the hours that followed, every one of the Western states and Russia deplored Donald Trump’s aggressivity, while Israël and Saudi Arabia applauded.

However, the only decisions announced by President Trump and the State Department are the reward mentioned above and the pause in the certification of the 5+1 agreement before Congress [4]; the latter decision does not concern international relations, but exclusively the interior politics of the United States. The agreement of 14 July 2015 was adopted by the United Nations Security Council, which alone can repeal it. Of course, all diplomats know that behind this multilateral agreement, the United States and Iran have agreed to a secret bilateral protocol which defines their respective roles in the Greater Middle East. At the time of writing, no-one is able to say whether or not President Trump has called this protocol into question. Consequently, all reactions to the declarations of the State Department and to his speech on 13 October are nothing more than fan dancing.

The ruling classes of the United States and Iran have always obsessed about their respective relations. During the Revolution of 1979, the Carter administration was so deeply divided that the Secretary of State, Cyrus Vance, and the Security Advisor, Zbigniew Brzeziński, confronted one another, and both threatened to resign if the President would not listen to them. It was finally Brzeziński who won out, but not without masking the arrest of spies from the US embassy in Teheran as the sequestration of « hostages », and then covering himself with ridicule by failing to free them [5]. From the time of this incident, the relations between Washington and Teheran have been a succession of media lies having nothing to do with reality.

From the Iranian point of view, the United Kingdom and the United States are lying predators who have colonised and exploited their country, and who continue to crush other states which have so far failed to revolt. This is why Iranians commonly call them by the nicknames of « Little Satan » and « Big Satan ». According to Ayatollah Ali Khamenei, every man worth his salt must fight against their perverted ways. But from another point of view, the Anglo-Saxons are not all bad, and there is no reason not to do business with them.

During the Bush Jr. administration, Vice-President Dick Cheney never ceased plotting with London and Tel-Aviv to attack Teheran. He created the very secret « Iran Syria Policy and Operations Group » around his daughter, Liz Cheney, and an old secret operations veteran, Elliott Abrams. He first considered the use of nuclear weapons, then supporting an Israëli attack from airports rented from Georgia. However, what happened was exactly the opposite –Iranian President Mahmoud Ahmadinejad and the US Chief of Staff, Admiral Mike Mullen, met in secret on 2 March 2008 in Baghdad. By overthrowing the Afghan Taliban and Iraqi President Saddam Hussein, the United States eliminated the enemies of Iran on his behalf, and favoured his regional influence.

During the Obama administration, the White House attempted to overthrow President Mahmoud Ahmadinejad by organising the colour revolution of 2009. Having drawn the conclusions of its failure, it initiated contact with its opponents, united around ex-President Hachemi Rafsandjani. It so happens that in the period between 1983 and 1986, the US National Security Council organised the Iran-Contra operation. At that time, Colonel Oliver North and the ubiquitous Elliott Abrams relied on a deputy, Cheikh Hassan Rohani, who introduced them to the Hodjatoleslam Rafsandjani. It was with this group that the Obama administration began talks in Oman, in March 2013. By some form of administrative pirouette, Ahmadinejad’s candidate was not authorised to present himself in the Presidential elections, which were won by Cheikh Rohani five months later. As soon as he gained power, Rohani began official negotiations for the 5+1 agreement that he had imagined during the Oman negotiations.

As for Donald Trump, he never failed to maintain a violently anti-Iranian discourse during his election campaign. This was also the position of his first Security Advisor, General Michael Flynn. However, since his arrival in the White House last January, the President has eliminated, one by one, all of his anti-Iranian advisors (with the exception of Mike Pompeo, the current Director of the CIA). On the contrary, his three main advisors are pro-Iranian (the Director of his cabinet, General John Kelly, his Secretary of Defense, General James Mattis, and his Secretary of State, Rex Tillerson).

Incidentally, it is interesting to note that during the nomination of the Secretary of State, the pro-Obama Press announced its certainty that the job would go to Elliott Abrams – yes, him again. The President received Abrams for a long time, asked him about his relations with Cheikh Rohani, then walked him to the door and nominated Tillerson.

It is always possible that President Trump could destroy the US-Iran agreement on an impulse, and even – much more serious – pick a quarrel with the Revolutionary Guards, but it is more probable that he will once again act up in order to soothe his Israëli and Saudi allies. We have to keep in mind that Donald Trump is not a professional politician, but a real estate promoter, and that he acts like one. He gained his professional success by spreading panic with his outrageous statements and observing the reactions he had created amongst his competitors and his partners.

In order to decide between these two hypotheses, we will have to wait for sanctions against the Revolutionary Guard. Then we shall see whether or not they are serious or simply an expression of Donald Trump’s manner and the traditional masquerade of the United States against Iran.

[2] “QE with a twist? In 2016, the Supreme Leader of the Revolution distributed more than 1 billion dollars around the world”, Translation Anoosha Boralessa, Voltaire Network, 18 September 2017.

[5] There never were any hostages at the US embassy in Teheran, but a group of spies arrested red-handed inside the embassy. Indeed, despite all its squealing, Washington has never asked for damages concerning this incident.