The True Impact of the Italian Pentagon

While the French armed forces are already set up in their new Pentagon, Italy is only now starting to construct its. Across the board, Nato member states are organizing themselves along the lines of the prototype laid out by their superior: the United States. This change in location corresponds to yet another evolution: a change in resources and objectives. 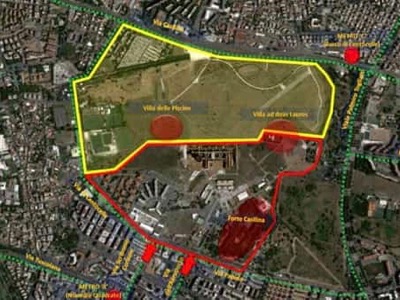 The inhabitants of the district of Centocelle (Rome) are quite right to protest about the impact that the construction of the Italian Pentagon is having on their archeological park and their green belt (il manifesto, 29 October). However, another, rather more serious impact, passes uncommented on: the impact on the Italian Constitution.

Earlier this year, we reported the following [1]:
• There was a plan to bring together all the Chiefs of the Armed Forces under a single structure, a mini-copy of the US Pentagon;
• This is an integral part of “revising the operational model of the Armed Forces”; and
• This plan is institutionalized through the “White Book for International Security and Defence” which was signed off by Minister Pinotti.

This plan overrides over the constitutional bases of the Italian Republic and reshapes the Republic into a power that takes military action in areas overlooking the Mediterranean: North Africa, the Middle East and the Balkans. And the basis for this action? Well there are two: first to support Italy’s own economic and strategic “vital interests; and second, ”; and second, anywhere in the world – from the Baltic to Afghanistan – that the interests of the West, represented by the US-led Nato, are at stake.

Functional to all this is the 2016 Framework Law. This institutionalizes military missions abroad (which currently total 30 in 20 countries), financing them through a fund granted by the Ministry of Economy and Finance.

Thus real military expenditure is increasing: with these and the other heads added to the Defence budget, it has risen to around 70 million euro on average per day. As requested by Nato, this will have to balloon further so as to reach around 100 million per day.

Reconfiguring the Armed Forces for offense requires new generation weapons that are even more costly. Italy’s latest purchase: the updated version of the US missile Agm-88E Aargm, the earlier version of which Italy had previously purchased. 25 of these missiles cost 18.2 million dollars and respect previous models that Italy previously purchased. Agm-88E Aargm is a medium range missile launched by bomber fighters to destroy radars at the beginning of an offensive, thus overcoming the defences of the country under attack.

The manufacturing industry, the Orbital Atk, specifies that “the new missile is also compatible with the F-35”. Of course, the F-35 is the US Lockheed Martin’s fighter bomber and Italy is participating in its manufacturing process through Cameri’s Faco plant managed by Leonardo (formerly Finmeccanica) and has undertaken to purchase 90 of them. The first F-35 arrived in the base of Amendola on 12 December 2016. This made Italy the first country, after the US, to receive the new fifth generation fighter plane that will also be armed with the new B61-12 nuclear bomb.

However Italy is not only a purchaser but is also a manufacturer of arms. The military industry is defined in the White Book as the “pillar of the Country System” since it “contributes, through exports, to rebalancing the balance of trade”, and to promoting products of national industry in high paid sectors”.

The results speak for themselves. Leonardo has jumped to ninth place in the rankings of the 100 biggest military industrials in the world. Its annual arms sales were around 9 billion dollars in 2016. At the beginning of October, Leonardo announced that it was opening another plant in Australia where it is manufacturing arms and communication systems for the Australian military navy.

In return, to further stimulate production in the military sector which today provides Leonardo with 84% of its turnover, two Finmeccanica companies are being sold to the Japanese company Hitachi. The companies sold are Ansaldo Sts and Ansaldo Breda, global leaders in manufacturing railways.

With funds diverted from the budget of the Stability Law, the Italian Pentagon, the new headquarters of the Ministry of War is built on this “pillar of the Country System”.