The truly explosive book? The one Trump signed 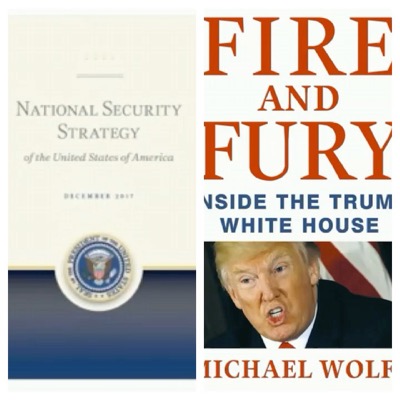 Everyone is talking about the explosive book on Trump, packed with sensational revelations such as the following: how Donald sets his quiff; how he and his wife sleep in separate bedrooms; what those in the White House corridors whisper about him once his back is turned; what his eldest son did (he held a meeting a Russian lawyer at the Trump Tower in New York, betrayed his homeland and rigged the results of the presidential elections).

However hardly anyone is talking about a book the content of which is truly explosive. This book was released a little earlier and signed by President Donald Trump: the “US National Security Strategy”. It is a periodic document drafted by heavyweights from various administrations, notably from the military powers. Compared with the previous one published by the Obama Administration in 2015, the Trump Administration US National Security contains elements of substantive continuity. The fundamental concept that, to “put America first so that it is secure, prosperous and free”, we need to have “the strength and willingness to exercise US leadership in the world”. This concept expressed by the Obama Administration (as by previous administrations) is as follows: “To guarantee the safety of her people, America has to lead from a position of strength”.

Compared with the Obama Administration’s strategic document (talking of Russian aggression to Ukraine” and of “an alert for the military modernization of China and its growing presence in Asia”, the document prepared by the Trump Administration is far more explicit:
“China and Russia challenge American power, influence and interests, attempting to erode American security and prosperity.

In this way, the authors of the strategic document reveal the cards showing what is really at stake for the United States:
the growing risk of losing its economic supremacy when faced with the emergence of new state and social subjects, especially China and Russia. The latter are adopting measures to reduce the dollar’s predominance. This allows the United States to maintain a dominant role, printing dollars the value of which are based not on the US’s real economic capacity but on the fact that they are used as a global currency.”

“China and Russia – the strategic documents emphasizes – want to shape a world antithetical to U.S. values and interests. China seeks to displace the United States in the Pacific region, expand the reaches of its state-driven economic model. Russia seeks to restore its great power status and establish spheres of influence near its borders. Russia aims to weaken U.S. influence in the world and to divide us from our allies and partners”.

This then leads on to what is tantamount to a true and proper declaration of war: “We with all tools of national power to ensure that the regions of the world are not dominated by one power,” that is to ensure that all are dominated by the United States. Clearly, among “all the instruments”, you will find the military instrument. This is an instrument with which the United States has maintained till now a clear superiority. As emphasized in 2015, in the Obama Administration’s strategic document:
“we possess a military whose might, technology and geostrategic reach is unrivalled in human history”; we have Nato, the strongest alliance in the world”. So the “US National Security Strategy”, signed by Trump involves Italy and the other countries in Nato, which are called to strengthen the Eastern flank against “Russian aggression”, and to allocate at least 2% of their GDP to military expenditure and 20% of this to purchasing new forces and arms. Europe is going to war but this is not talked about in the course of televised debates: this is not an issue for the electoral campaign. .