UK-France declaration on security and defence 2018 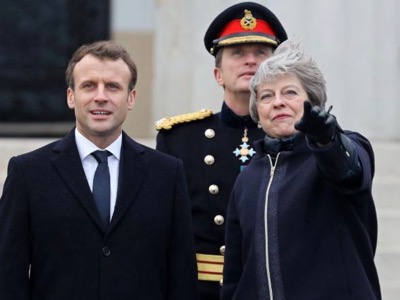 1. The United Kingdom and France are Europe’s two leading defence powers, with independent nuclear deterrents, full spectrum armed forces able to deploy and operate, alone or with Allies and partners, across the world on land, at sea, in the air, and increasingly today in cyberspace. We both sustain important defence industrial capabilities essential to Europe’s defence and security. We have consistently shown both the will and ability to promote and defend our interests, and support global peace and stability and the Rules Based International System. Both nations have shown national resilience in the face of recent terrorist attacks – the enduring threats we face are the same and will be so in the coming years.

2. This common purpose and capability is at the heart of the 2010 Lancaster House Treaties. And it is not new. Later this spring we mark the centenary of the first placement of both our armies under a single command, with Marshal Foch’s appointment in 1918 as Supreme Commander of the Allied Armies in France.

3. Today, following the successful implementation of the measures announced at the Lancaster House Summit in 2010 and at subsequent Summits, our Armed Forces have reached an unprecedented level of integration. Since the last Summit, at Amiens in March 2016, our Armed Forces have been working increasingly closely together. This has included:

• Strengthened maritime cooperation in the Channel and the Atlantic, including French Atlantique 2 maritime patrol aircraft periodically operating from RAF Lossiemouth in Scotland, and the closer integration of our national air defence forces, in response to increased security challenges

• During 2017, a French Armoured Infantry Company forming part of the UKled NATO enhanced Forward Presence Battle Group in Estonia; • Working closely together as leading members of the international coalition against Daesh in Syria and Northern Iraq, including provision of ISR and airto- air refuelling. British and French fast-jet pilots serving as exchange officers have flown on combat missions;

• Supporting each other in providing humanitarian relief in the Caribbean following Hurricane Irma, including the UK providing a C17 to fly French emergency supplies into theatre and the French providing imagery intelligence to the UK;

• Our Navies operating increasingly closely around the world, including: RN ships acting as escorts to the Charles de Gaulle and French Navy ships to HMS Ocean in the Arabian Gulf; joint command of Coalition Task Force 150 in 2017 providing maritime security in the Southern Red Sea, Arabian Sea and off the Horn of Africa; the launch of improved maritime notification arrangements to improve the security of merchant shipping in the Gulf of Guinea; and UK helicopters deploying to the Indian Ocean and Far East in 2017 as part of the French Jeanne d’Arc task force;

4. We also delivered full validation of the Combined Joint Expeditionary Force (CJEF) concept in 2016 following the bilateral Exercise Griffin Strike in the UK, involving over 5,000 UK and French military personnel. Since then the CJEF has been available for operations up to Peace Enforcement should that be necessary.

5. In the capabilities area, we largely completed feasibility work on the Future Combat Air System project; made significant progress under the One Complex Weapon programme, including the first successful test firings in 2017 of the Sea Venom/ANL anti-ship missile project announced at the 2014 Brize Norton Summit, launch of the concept phase for the Future Cruise/Anti- Ship Weapon in March 2017, and signature, ratification and entry into force of the Inter-Governmental Agreement on complex weapons enabling MBDA to establish centres of excellence in France and the UK; and launched the demonstration phase of our joint Maritime Mine Counter-Measures project.

6. In this context, we have agreed on the continuing importance of United Kingdom defence to the stability of the multilateral order including its contribution to European defence and security, and of the ability of UK defence industry to continue to be able to engage in European defence research and capability development programmes under arrangements to be defined at the European level and in other relevant formats.

7. Building on these developments, we are now planning to take forward a coherent programme of further policy, military and capability cooperation over the coming years:

• Our new Defence Ministerial Council will meet regularly (envisaged as three meetings a year) to provide strategic oversight and direction of the bilateral defence relationship. This will be supported by an enhanced defence policy dialogue;

• We will achieve Full Operating Capability for the Combined Joint Expeditionary Force in 2020, supported by a coherent coordinated joint CJEF exercise programme and wide-ranging specialist engagement. This will give us the ability to deploy a CJEF across the full range of missions envisaged at Lancaster House in 2010, up to and including crisis management operation involving early entry in a potentially hostile territory at range;

• Maintain our independent nuclear deterrents to ensure credible deterrence against threats to our vital interests in extreme circumstances of self-defence, now and in the future. Nuclear deterrence also ensures that we retain our freedom of decision and action in all circumstances, even when facing a nuclear power. We are committed to creating the conditions for a world without nuclear weapons in a way that promotes international stability and in accordance with the Treaty on the Non Proliferation of Nuclear Weapons , which remains the cornerstone of the global non-proliferation regime, and we will develop the Joint Nuclear Commission for our strategic discussion on nuclear deterrence policy; nuclear proliferation; and nuclear disarmament;

• We will enhance our maritime cooperation in home waters and around the world in support of global security and prosperity and protection of freedom of navigation, including developing plans for a Royal Navy ship to escort the Charles de Gaulle and a French Navy ship to escort HMS Queen Elizabeth in 2019; strengthening cooperation in the Indo-Pacific region through coordination between Royal Navy and French Navy units deployed in the area in 2018 and by further interaction in this region on a routine basis whenever possible; continuing cooperation in the Gulf of Guinea, through the finalisation of the agreement on maritime information sharing;

• We will continue developing the close relationship between 16 Air Assault Brigade and 11 Brigade Parachutiste, as an airborne echelon of the CJEF, including through combined brigade-level activity;

• We stress the need to further develop the emergence of a shared strategic culture between European States. France and the UK, thanks to their robust common expeditionary experience, have agreed that their bilateral defence relationship would contribute to the development of the European Intervention Initiative.

This is intended to create among a group of European Nations the conditions for future engagements in various military intervention scenarios.

• We will work together and with other Allies to improve the effectiveness and efficiency of NATO, including through the NATO 2018 Summit; NATO nuclear adaptation; contribute further to the deterrence and defence posture, including by building upon our measured and proportionate response to Russia’s more assertive foreign policy and military activity; help develop the capacity of Iraq’s security forces and defence and security institutions. In 2017, French and British forces have deepened their operational cooperation in Estonia in the framework of the enhanced Forward Presence (eFP) France will contribute to the eFP in 2019, as part of the UK-led battlegroup in Estonia, building on the successful joint deployment in 2017.

• We have agreed to work more closely together to counter terrorism and instability in the Sahel and strengthen our cooperation in this region. An important aspect of the Lancaster House Treaty is that our two countries have committed to support, as agreed on a case by case basis, one country when it is engaged in operations in which the other is not engaged. Therefore, following French requests for additional support for Operation BARKHANE, the United Kingdom has decided to deploy three CH-47 Chinook heavy lift helicopters to Mali to provide logistical support to French operations. The United Kingdom has also agreed to continue to make available a strategic heavy-lift transport aircraft which have already provided important logistical support. This demonstrates the United Kingdom’s commitment to supporting European Allies and partners to maintain Europe’s security.

• Share lessons from national deployment and multinational coordination (MNCC) in response to Hurricane Irma and Maria to draw increased coordination ahead of future cyclonic seasons in the region, looking to gain mutual benefit from the use of our forward-deployed capabilities.

• We will increase defence cooperation in the space and cyber domains;

• We have agreed a package of practical measures to improve co-operation between our military intelligence services in support of shared strategic interests and CJEF operations.

• We have agreed to sustain a continuing programme of military capability cooperation in our mutual interest. Managing exchange of national sensitive information is becoming an increasingly important element in our mutual cooperation. We commit to addressing any issues that arise. We reaffirm the strategic importance of cooperation on our One Complex Weapon Initiative to both our countries, and confirm our continuing willingness to develop our world leading missile capability cooperation.

• We will continue the Future Cruise/Anti-Ship Weapon (FC/ASW) concept phase, in order to determine the optimum mix of solutions for replacing our Strike and Anti-Ship Missiles. The objective is to define, in 2020, the optimum mix of solutions to take forward together to deliver these future capabilities. France will consider Brimstone as an option to arm its Reapers, for the Standard 3 Tigre Attack Helicopter, and the future MALE Unmanned Air System. The UK continues to investigate the potential for a Ballistic Missile Defence (BMD) capability on T45 for which ASTER B1 and B1NT are potential effectors. We will support the preparation of the METEOR/BVRAAM midlife study with our other European METEOR partners.

• Following the Future Combat Air System Development Phase-0, we will continue our work on assessing the emerging conclusions before decisions are taken on future phases. We will also pursue opportunities for Combat Air cooperation, and our capability analysis of the Future Combat Air Environment including how manned and unmanned systems might operate together.

• Our joint Maritime Mine Counter Measures project is developing worldleading maritime autonomous technology. We intend to develop options to bring the system into operational service rapidly. We will continue to work together on Test and Evaluation, Technical Expertise and Acceptance and we share the objective to sign the Test Pilots’ School Technical Agreement in early 2018.

8. Our two countries have been Allies for a very long time. In recent years we have been sharing in the commemoration of a number of significant joint anniversaries in France, including the centenaries of the Battle of the Somme in 2016 and of the Battle of Cambrai in 2017. This year will see the centenaries of the Battle of Amiens in August, marking the opening of the ‘Hundred Days Offensive’ that led to the Armistice, and in November of the end of the First World War itself. In 2019 we expect to mark the 75th Anniversary of D Day with the unveiling of a major memorial in Normandy. These occasions serve to remind us of the continuing importance of the defence relationship between our two countries as a foundation of our national and of European security.