According to President Macron, « France is back » (in English in the text), and intends to play an international role once more, after ten years of abandon. However, Emmanuel Macron has never yet explained what might be the policy he intends to apply. Picking up the elements he has already developed in these columns, and placing them in the European context as well as the context of this country’s History, Thierry Meyssan analyses the change of direction which has just been announced. 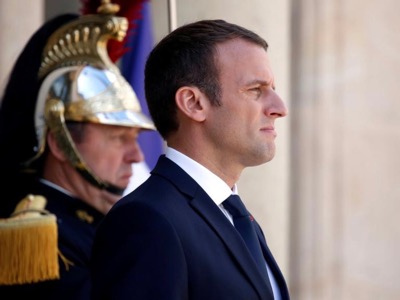 When Emmanuel Macron began his campaign for the Presidency of the French Republic, he knew nothing about international relations. His mentor, Jean-Pierre Jouyet, the head of the General Inspectorate of Finances (a corps of 300 senior civil servants), made sure he was given an accelerated course of training.

France’s prestige had been considerably depleted by its two former Presidents, Nicolas Sarkozy and François Hollande. The position of France was now perceived as « inconsistent » due to its absence of priority and its innumerable changes of direction. This was the reason Macron began his mandate by meeting as many heads of state and government as possible, demonstrating that France was repositioning itself as a mediating power, capable of talking to anyone.

After having shaken hands and distributed dinner invitations, however, he had to give a content to his policy. Jean-Pierre Jouyet [1] proposed that France remain in the Atlantist camp, gambling on the US Democrats who, in his opinion, should soon be back in the White House, perhaps even before the elections of 2020. When the British were leaving the European Union, France confirmed its close alliance with London while maintaining its relationship with Berlin. The Union had to be recentred on the governance of the Euro. It would put an end to free exchange with partners who did not respect it, and would create huge enterprises on the Internet capable of rivalising with those of the GAFA (Google, Apple, Facebook, Amazon). It should also develop a common defence against terrorism. With its allies, it would engage in the struggle against the Russian influence. Finally, France would pursue its military action in Sahel and the Levant.

In September 2017, Jean-Pierre Jouyet was nominated as French ambassador to London. In January 2018, France and the United Kingdom relaunched their diplomatic and military cooperation [2]. Still in January, the two states formed a secret authority, the « Little Group », to reprise the Franco-British colonisation of the Levant [3].

This policy, which has never been discussed in public, not only ignores the History of France, but also the German demand to play a more important international political role. Indeed, seventy years after its defeat, the fourth economy in the world is still limited to a secondary role [4].

Concerning the Arab world, President Macron – an ENA alumnus (Ecole Nationale d’Administration) and ex-collaborator with Rothschild & Co - adopted the point of view of his two consultants on the subject. They were the Franco-Tunisian Hakim El Karoui (another ex-Rothschild & Co) for the Maghreb, and ex-ambassador to Damascus Michel Duclos – another ENA alumnus – for the Levant. El Karoui is not a product of Republican integration, but of the transnational haute bourgeoisie. He alternates a Republican attitude on the international plane, with another, communitarian, on the interior. Duclos is an authentic neo-conservative, trained in the USA under George W. Bush by Jean-David Levitte [5].

We may already note certain incoherences in this policy. In application of the decisions of the « Little Group », France has re-adopted the habit of President Hollande’s team of relaying to the UNO the positions of its employees in the Syrian opposition (those who pay allegiance to the flag of the French mandate in Syria [7]). But times have changed. The letter by the current President of the Syrian Negotiation Committee, Nasr al-Hariri, transmitted to the Security Council in the name of France, insults not only Syria, but also Russia [8]. It accuses one of the two major military powers in the world [9] of perpetrating crimes against Humanity, which contravenes the « mediating » position of a permanent member of the Council. While Moscow preferred to ignore this slip of the tongue, Damascus replied angrily [10].

Finally, the policy of Emmanuel Macron is almost the same as that of Nicolas Sarkozy and François Hollande, even though, because of the presence of Donald Trump in the White House, it relies more on the United Kingdom than the United States. The Elysée pursues the idea of an economic recovery for its multinationals – not in France but in its erstwhile colonial Empire. These are the same choices as those made by the Socialist Guy Mollet, one of the founders of the Bilderberg Group [11]. In 1956, the President of the French Council allied himself with London and Tel-Aviv in order to conserve France’s shares in the Suez Canal, which had been nationalised by President Gamal Abdel Nasser. Mollet proposed to his British counterpart, Anthony Eden, that France join the Commonwealth and pay allegiance to the Crown, and that the French people adopt the same civil status as the population of Northern Ireland [12]. This project for the abandon of the Republic and the integration of France into the United Kingdom under the authority of Queen Elizabeth II was never discuissed publicly.

Never mind the ideal of equal rights exposed in 1789 and the rejection of colonialism expressed by the French People when they were faced with the aborted coup d’etat of 1961 [13] – in the eyes of Power, foreign policy has nothing to do with democracy.

[6] From the British point of view, the Sykes-Picot-Sazonov agreements of 1916 are not a fair sharing of the world between the three empires, but a concession made by the United Kingdom to ensure the support of France and Russia (Triple Alliance) against the German Reich, the Austro-Hungarian Empire and Italy (Triplice).

[7] “France: seeking old mandate in Syria”, by Sarkis Tsaturyan, Oriental Review (Russia) , Voltaire Network, 6 October 2015. In 1932, France imposed a new flag on mandated Syria. It is composed of three horizontal bands representing the dynasties of the Fatimides (green), the Omeyyades (white) and the Abbasides (black), symbolic of the Chiite Muslims for the first and the Sunnis for the two others. The three red stars represent the three minorities - Christian, Druze and Alaouite. This flag was still in force at the beginning of the Syrian Arab Republic, and returned in 2011 with the Free Syrian Army.

[11] “What you don’t know about the Bilderberg-Group”, by Thierry Meyssan, Komsomolskaïa Pravda (Russia) , Voltaire Network, 9 May 2011.

[12] “When Britain and France nearly married”, Mike Thomson, BBC, January 15, 2007. « Frangland? UK documents say France proposed a union with Britain in 1950s : LONDON: Would France have been better off under Queen Elizabeth II? », Associated Press, January 15, 2007. Guy Mollet was not accepting the proposition for a Franco-British Union as it was formulated by Winston Churchill and Anthony Eden in 1940, after the French defeat, to create a provisional fusion of the two nations in order to fight the Nazi Reich. He was in fact inspired, in the context of the Suez crisis and the hope of saving the French Empire, by the proposition of Ernest Bevin, eleven years earlier, to create a third block against the USA and the URSS, by joining the British, French and Dutch empires within the framework of a Western Union. This project was abandoned by London for the benefit of the CECA (ancestor of the European Union) on the economic level, and NATO on the military level.

Who does Emmanuel Macron owe?

According to Emmanuel Macron, the days of popular sovereignty are over

So what does President Macron have up his sleeve?