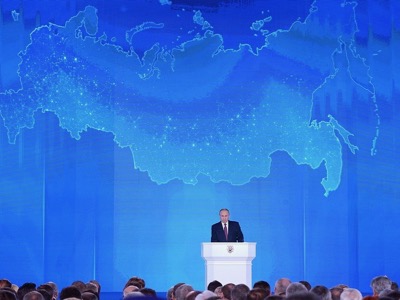 The President Putin’s speech on the State of the Nation [1], dedicated to domestic and international issues, aroused little political-media interest and some ironic remarks in Italy. Yet it should be listened to with great attention.

Avoiding diplomatic roundabout expressions, Putin lays his cards on the table. He denounces the fact that in the past 15 years the United States fueled the nuclear arms race, trying to acquire a strategic advantage over Russia.

This is confirmed by the Federation of American Scientists: through revolutionary technologies, the US has tripled the destructive capability of their nuclear attack ballistic missiles.

At the same time - Putin underlines - the US withdrew from the ABM Treaty and deployed a global system of "missile defense" to neutralize the Russian ability to retaliate against a nuclear first strike.

In the wake of NATO’s expansion to the East, they installed missile sites in Romania and Poland, while other launching systems (not only of interceptor missiles but also of attack missiles) are on 18 warships dislocated in areas close to the Russian territory.

Russia had many times warned the United States and European NATO member states that reciprocal measures would be taken in response to the deployment of the US global missile defense system.

Russia has many times warned the United States and European NATO member states that, in response to this deployment, it would have taken counter-measures. "But no one was listening to us, so listen now," warned Putin. He then passes to the language of force, the only one evidently understood in Washington.

After recalling that after the fall of the USSR, 44.6% of its military potential and that the US and its allies were convinced that it would no longer be able to rebuild it, Putin shows up, on two large screens, the new types of strategic weapons developed by Russia:

A cruise missile launched from the air armed with a nuclear warhead, with practically unlimited range being powered by nuclear energy, an unpredictable course and the ability to penetrate through any anti-missile defense.

Kinzhal and Avangard missiles with hypersonic speed (over 10 times that of sound).

The 200-ton Sarmat intercontinental ballistic missile on a mobile platform, with a range of 18,000 km, armed with more than 10 nuclear warheads maneuvering at hypersonic speed to escape interceptor missiles.

A submarine drone faster than a torpedo that, powered by nuclear energy, covers intercontinental distances at great depths, hitting coastal ports and fortifications with a large-scale nuclear warhead.

Putin reveals the characteristics of these weapons because he knows that the United States is developing similar weapons and wants to warn them that Russia is now at their level or at a higher level.

This confirms that the nuclear arms race takes place not on quantity but, increasingly, on the quality of weapons, that is on the type of vectors and on the offensive capabilities of nuclear warheads.

At the same time, it confirms the growing danger we are running, because of U.S. nuclear weapons and strategic stations, such as the MUOS and the JTAGS in Sicily, deployed on our territory.

Russian Foreign Minister Lavrov, denounces that "non-nuclear European NATO member states, in grave violation of the Non-Proliferation Treaty, are trained by the U.S. in the use of tactical nuclear weapons against Russia".

The warning is clear, for Italy too. But none of the main parties took note of this, erasing any reference to NATO and nuclear weapons from the electoral campaign, with a sort of tacit agreement. As if this had nothing to do with our future and our life itself.