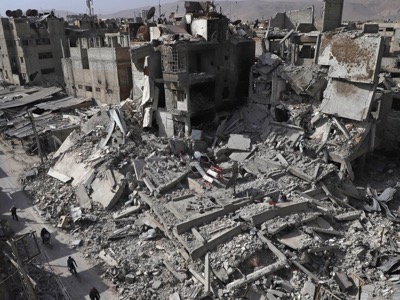 Jabhat al-Nusra terrorists operating in eastern Ghutah and militants of illegal armed groups carried out targeted mortar and sniper shelling of the humanitarian corridor set up near the former Palestinian camp, the Wafidin camp, to allow civilians to exit the area. Five women trying to leave Ghutah and a few Syrian soldiers were reportedly injured.

Seventeen people were injured as a result of rocket and mortar strikes by terrorists on the Damascus districts of Duwaylah and Mazra‘ah, the university campus, Beirut and Aleppo streets, Tahrir Square as well as Jaramana and Assad suburbs. One mine hit the warehouse of the Syrian Arab Red Crescent. There were also several explosions next to the French Hospital.

Jabhat Al-Nusra terrorists opened fire from small weapons against the besieged enclave of Fu‘ah and Kafraya north of the city of Idlib. Two people were injured.

Jabhat al-Nusra terrorists entrenched around al-Lajat in north-eastern Dar‘a shelled from mortars and large-caliber machine guns the area of Mi‘sarah along the road connecting the towns of Izra‘ and Shaykh Miskin in the southern de-escalation zone. One woman sustained injuries.

Terrorists in control of the former Nazihin camp for Palestinian refugees in the town of Dar‘a launched seven mines on the local police station.

Jaysh al-Islam militants operating in eastern Ghutah launched six mines in the area of the former Palestinian camp, the Wafidin camp. More than 300 civilians gathered near the humanitarian corridor but were not able to use it because of shelling.

Syrian military prevented an attempt of jihadists from eastern Qalamun to transfer to Ghutah a big lot of weapons and ammunition, including anti-tank rocket systems and anti-tank mines.

The Damascus districts of Duwaylah, Ushsh al-Wurwur and Bab Sharqi were shelled again with rockets and mortar bombs. More than 37 mines hit the Assad suburb, 5 hit the Jaramana suburb and 7 hit the area adjacent to the Ibn Sina hospital in the town of Adra.

Despite the declarations made on behalf of the main armed groups in eastern Ghutah about their readiness to observe the truce, massive and indiscriminate shelling of Damascus and its suburbs continued on a daily basis.

In the southern de-escalation zone, Jabhat al-Nusra terrorists launched from the district of al-Balad in Dar‘a under their control several mines on the municipal clinic (with several education facilities nearby), killing a 13-year-old school student and a 21-year-old woman. Eighteen people were injured, mainly patients of the hospital, women and children, and nine of them remained in a critical condition.

In northern Qunaytirah, Jabhat al-Nusra terrorists launched mortar fire on the village of Jubbah and the area of Tall al-Sha’r. Militants operating in this area receive ammunition as well as logistical and financial support from abroad.

In the Homs de-escalation zone, Jabhat al-Nusra terrorists launched mortar and sniper fire against the positions of the Syrian army, triggering intensive clashes north of Rastan, south of Talbisah and east of the village of Ghantu.

Information on the activities of illegal armed groups in the eastern Ghutah de escalation zone undermining the implementation of Security Council resolution 2401 (2018) (as of 1 March 2018, 9 a.m., Moscow time)

Jaysh al-Islam militants carried out mortar shelling of the positions of the Syrian army in Hawsh Dawwarah (13 km north-east of Damascus). Leaders of Jaysh al-Islam and Faylaq al-Rahman also plan to carry out a series of terrorist attacks in eastern Ghutah. Those groups formed a joint operation room to coordinate such attacks.

From 10.10 a.m. to 11.30 a.m. in the eastern Ghutah de-escalation zone, militants of illegal armed groups made three attempts to launch attacks on the Wafidin camp humanitarian corridor from the area of eastern Harasta, the western districts of Rayhan and the northern districts of Shaffuniyah. This prevented once again the exit of civilians from the zone of military operations.

There were new incidents of mortar shelling of residential areas and suburbs of Damascus from the territories under the control of illegal armed groups along the perimeter of the eastern Ghutah de-escalation zone. During the 24 hours, there were 12 incidents of shelling with 29 mines and one rocket, killing one civilian and injuring six.

Information on the activities of illegal armed groups in the eastern Ghutah de escalation zone undermining the implementation of Security Council resolution 2401 (2018) (as of 2 March 2018, 9 a.m., Moscow time)

In the eastern Ghutah de-escalation zone, the humanitarian corridor near the Wafidin camp checkpoint was repeatedly shelled from small arms and mortars. This prevented once again the exit of civilians from the zone of military operations. Illegal armed groups continued to forcefully detain people, forbidding them to leave dangerous areas. Several dozens of men, women and children tried to reach the positions of the Syrian army in the area of Utaya controlled by Jaysh al-Islam. However, militants did not allow them to do so, responding with violence.

There were new incidents of mortar shelling of residential areas from the territories under the control of illegal armed groups along the perimeter of the eastern Ghutah de-escalation zone. During the 24 hours, there were 13 120-mm mine blasts, killing one person and injuring four.

Tensions and unrest kept growing among the population. An armed incident occurred in north-eastern Duma when militants tried to disperse civilians protesting the ban to be evacuated from eastern Ghutah. Four civilians and three Jabhat al-Nusra terrorists were killed as a result of clashes.

Permanent Representative of the Federation of Russia to the United Nations.