Statement by the UE Foreign Affairs Council on the Salisbury attack 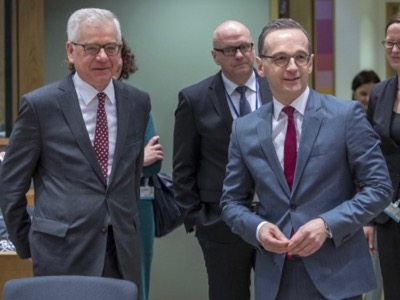 The European Union strongly condemns the attack that took place against Sergei and Yulia Skripal in Salisbury, UK on 4 March 2018, that also left a police officer seriously ill. The lives of many citizens were threatened by this reckless and illegal act. The European Union takes extremely seriously the UK Government’s assessment that it is highly likely that the Russian Federation is responsible.

The European Union is shocked at the offensive use of any military-grade nerve agent, of a type developed by Russia, for the first time on European soil in over 70 years. The use of chemical weapons by anyone under any circumstances is completely unacceptable and constitutes a security threat to us all. Any such use is a clear violation of the Chemical Weapons Convention, a breach of international law and undermines the rules-based international order. The EU welcomes the commitment of the UK to work closely with the Organisation for the Prohibition of Chemical Weapons (OPCW) in supporting the investigation into the attack. The Union calls on Russia to address urgently the questions raised by the UK and the international community and to provide immediate, full and complete disclosure of its Novichok programme to the OPCW.

The European Union expresses its unqualified solidarity with the UK and its support, including for the UK’s efforts to bring those responsible for this crime to justice.

The EU will remain closely focussed on this issue and its implications.