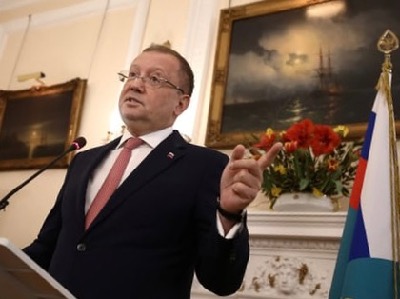 The Number 1 rule in Britain is to start any statement with a joke. Unfortunately, it’s not a time to joke. The issue I am going to raise is too serious.

On 5 March 2018 we heard media reports announcing that the day before two Russian citizens Sergei and Yulia Skripal were poisoned in Salisbury. Sergei Skripal is one who has dual citizenship. First of all I would like to wish all the victims, including Detective Sergeant Nick Bailey, who also suffered from this incident, speedy recovery and well-being.

The Embassy has immediately requested the British authorities to share information about the incident and details of the ongoing investigation.

Unfortunately, 18 days have passed since the day of the incident and we have not received any official information from the Foreign and Commonwealth Office or police on the investigation thereof. The British authorities refused to provide samples of the chemical substance. The legitimate consular access to the Russian citizens under the 1963 Vienna Convention on Consular Relation has not been granted.

The only response we received from the British authorities was a Note Verbale about medical condition of Yulia Skripal. It did not go further than the official public statements, according to which she was reportedly critically ill, but in a stable condition. The Foreign Office refused to share information on Sergei Skripal, citing his British citizenship.

Therefore, the British Government has violated its obligations under the Vienna Convention on Consular Relations by denying consular access for the Embassy to the Russian citizens. We continue to insist that the access and full information on the condition of our compatriots, whom nobody has seen since 4 March, should be provided.

Next hour Prime Minister May updated the House of Commons about the incident in Salisbury using the same words as Secretary Johnson did at our meeting, except that she introduced the term “Novichok”, a bizarre Russian name to use with regard to a chemical substance, in a clear attempt to additionally and quite artificially link the incident to Russia.

Next day, on 13 March the Russian Ministry of Foreign Affairs gave a statement on the incident in Salisbury and strongly protested against evidence-free accusations and provocations by the British authorities. It was emphasized that Russia is not to be talked to in ultimatums, and that in any case we can only properly consider the matter after we receive samples of the chemical substance to which UK is referring to and after the UK complies with the Chemical Weapons Convention that stipulates cooperation between States Parties, for which Moscow is ready. Without that there is no sense in the British statements.

On 14 March the Prime Minister gave another statement on the incident in Salisbury in the House of Commons, where she announced an expulsion of Russian diplomats and other hostile and provocative measures against Russia. She provided no proof of Russia’s alleged involvement in the incident and made a conclusion that, as she put it, it was “highly likely” that Russia was responsible for it. Thus, the British Government again built its official position on pure assumptions.

The Embassy again requested the British authorities to cooperate under the Chemical Weapons Convention on bilateral basis or through the OPCW Executive Council and share information and the samples of the toxic substance. Due to the pressure of the Russian side, the Prime Minister at last sent a letter to the Director-General of the OPCW Technical Secretariat on 14 March and requested assistance in verifying British analysis.

As I understand, the OPCW experts arrived to the UK this Monday. We do not know their mandate. But I hope they will follow all the necessary procedures and principles of the CWC, including ensuring a proper chain of custody of the samples, if there are any. They would also need to check how that was possible that the British authorities managed to designate the nerve agent used as so called “Novichok” and its origin so quickly. Could it mean that it is highly likely that the British authorities already had this nerve agent in their chemical laboratory in Porton Down, which is the largest secret military facility in the UK that has been dealing with chemical weapons? Is it a coincidence that this chemical weapons facility is only 8 miles away from the site of the incident? How did doctors decide what antidotes to administer to the victims? Russian experts were puzzled by how quickly the British authorities managed to designate the nerve agent allegedly used in Salisbury and how this correlates with Scotland Yard’s official statements that “the investigation is highly likely to take weeks or even months” to arrive at conclusions.

We are sure that the results of the Technical Secretariat assistance mission should be reported to the OPCW Executive Council.

A few words about lack of cooperation from the British side.

Instead of imposing a 24-hour deadline the UK could and should have referred to paragraph 2 of Article IX of the Chemical Weapons Convention, which requires the State Parties to make every effort to clarify and resolve through exchange of information and consultations any matter which may cause doubt about compliance with the Convention. A State Party which receives a request from another State Party shall provide as soon as possible, but in any case not later than 10 days after the request, information sufficient to answer the doubt or concern. If they requested information from Russia on 12 March, they would have received it by 22 March.

The British side did not send a request to Russia and is not willing to talk to Russian representatives in the Hague, where the OPCW Technical Secretariat is located. Instead an anti-Russian campaign has been launched in the UK.

To make the story short, Britain has, without any evidence, blamed Russia of poisoning of three people and continues to refuse to cooperate. We cannot accept that.

There is another case, which worries us very much. From the British media, and again not from the British authorities, we have learned about the death of the Russian citizen Mr Nikolai Glushkov. The Embassy has also learned from the press that the police investigating Mr Glushkov’s death assumes that he could have died from “compression on the neck”, suggesting he was strangled.

In full accordance with the 1963 Vienna Convention on Consular Relations, the Embassy immediately requested by a Note Verbale full information on the circumstances of the death of the Russian national and on the investigation, but has not received any meaningful response from the Foreign Office so far. Moreover, it seems that the British side is deliberately ignoring our requests and continues to avoid any contacts with the Embassy on this matter.

To summarize what have been said before a Q/A session, I would like to say that the burden of proof lies with the British authorities. By now no facts have been officially presented either to the OPCW, or to us, or to UK’s partners, or to the public.

The UK has a bad record of violating international law and misleading the international community, which includes invading Yugoslavia (78 days of bombardment), Iraq and Libya under false pretexts, and supporting the coup d’état in Ukraine. I would like to quote President Ronald Reagan, who frequently referred to the Russian proverb “trust but verify”.

History shows that British statements must be verified.

We demand full transparency of the investigation and full cooperation with Russia and with the OPCW.

Russian Federation ambassador to London (since 2011).