Letter of associations of Ghouta 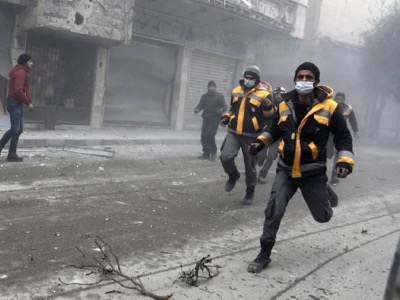 I have the honour to transmit herewith a letter on behalf of the civil society groups active in Eastern Ghouta (see annex).

I should be most grateful if you would circulate the present letter and its annex as a document of the Security Council.

Since the Secretary-General’s briefing on Security Council resolution 2401 (2018), attacks by the Syrian regime and its ally, Russia, have intensified, particularly in besieged Eastern Ghouta. Our partners on the ground have documented a major increase in the targeting of civilians through the use of internationally prohibited weapons, including cluster bombs, napalm and white phosphorus, as well as the toxic chemical, chlorine gas. We have also documented continued forced displacement, with tens of thousands of civilians forced into makeshift camps in the absence of any United Nations supervision. Recently, reports have circulated of men being interrogated and, in some cases, executed.

Resolution 2401 (2018) has gone wholly unenforced. Violations have passed without consequence. While members of the Security Council have spoken forcefully of the need to respect Council resolution 2401 (2018), no action has been taken to enforce it. As a result, violations have multiplied and Russia and the Syrian regime have continued with their plan to seize full control of Eastern Ghouta and to cleanse the areas of all inhabitants who reject their terror and tyranny.

Today, we call on the President of the Security Council to hold an emergency session of the Security Council in which you agree on the concrete actions needed to enforce Security Council resolution 2401 (2018) and deter the indiscriminate use of weapons and the deployment of prohibited weapons. If you cannot reach consensus — and Russia insists on recklessly wielding its veto — then we appeal to members of the Council to act in their own capacity to protect civilian lives in Syria, ensure all movement from Eastern Ghouta is voluntary, and stop the use of prohibited weapons. We also call for measures to protect the humanitarian aid workers and activists, who have chosen to remain inside Eastern Ghouta, despite the absence of any guarantees ensuring their safety.

Millions of lives will be affected by the failure of the Security Council to take tangible action now. After Eastern Ghouta, it is clear that the Syrian regime will set its sights on Dar‘a, Idlib and the northern countryside of Homs. The millions of civilians in these areas are counting on the resolve and the determination of the Council to enforce the very resolutions which Council members have adopted. Lives can still be saved — but only if members of the Council have the will and courage to act.

Permanent Representative of the United Kingdom to the United Nations.