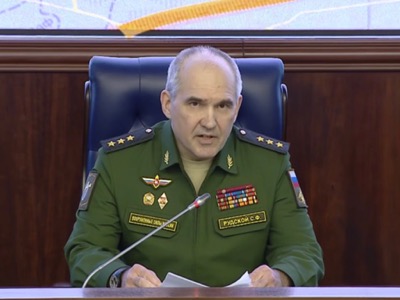 The US alongside its allies conducted a missile strike by its air and naval carriers targeting military and civil facilities of the Syrian Arab Republic on April 14 in the period from 3.42 am till 5.10 am (MSK).

The Russian air defence systems at the Khmeimim and Tartus air base timely located and controlled all naval and air launches made by the USA and the UK.

Announced French aircraft have not been registered by the Russian air defence systems.

It is reported that the B-1B, F-15 and F-16 aircraft of the USAF as well as the Tornado airplanes of the UK RAF over the Mediterranean Sea, and the USS Laboon and USS Monterey located in the Red Sea were used during the operation.

The B-1B strategic bombers approached the facilities over the Syrian territory near al-Tanf illegally seized by the USA.

As preliminary reported, there are no civilian casualties and losses among the Syrian Arab Army (SAA). Information will be further specified and made public.

As evident by the available data, 103 cruise missiles have been launched, including Tomahawk naval-based missiles as well as GBU-38 guided air bombs fired from the B-1B; the F-15 and F-16 aircraft launched air-to-surface missiles.

The Syrian air defence systems, which are primarily the USSR-made AD systems, have successfully countered the air and naval strikes.

In total, 71 cruise missiles have been intercepted. The S-125, S-200, Buk, Kvadrat, and Osa Syrian AD systems were involved in repelling the attack.

It proves high efficiency of the Syrian armament and professional skills of the Syrian servicemen trained by the Russian specialists.

Over the last eighteen months, Russia has completely recovered the Syrian air defence systems, and continues its development.

It is to be stressed that several years ago given the strong request by our western partners, Russia opted out of supplying the S-300 AD systems to Syria. Taking into account the recent incident, Russia believes it possible to reconsider this issue not only regarding Syria but other countries as well.

Four missiles targeted the Damascus International Airport; 12 missiles – the Al-Dumayr airdrome, all the missiles have been shot down.

18 missiles targeted the Blai airdrome, all the missiles shot down.

12 missiles targeted the Shayrat air base, all the missiles shot down. Air bases were not affected by the strike.

Five out of nine missiles were shot down targeting the unoccupied Mazzeh airdrome.

Thirteen out of sixteen missiles were shot down targeting the Homs airdrome. There are no heavy destructions.

In total 30 missiles targeted facilities near Barzah and Jaramana. Seven of them have been shot down. These facilities allegedly relating to the so-called “Damascus military chemical programme” were partially destructed. However, the objects have not been used for a long time, so there were no people and equipment there.

The Russian air defence systems have been alerted. Fighter jets are on combat air patrol now.

There were no cruise missiles entering the Russian AD responsibility area. The Russian air defence systems were not applied.

Besides, the attack took place on a day when the Organisation for the Prohibition of Chemical Weapons (OPCW) special mission was to start working on investigating incident in the city of Douma where chemical attack allegedly occurred.

It is to be stressed that there are no facilities on producing chemical weapons in Syria, and this has been documented by the OPCW.

The American aggression proves that the USA is not interested in objectivity of the ongoing investigation, seeks to wreck peaceful settlement in Syria and destabilize environment in the Middle East, and all these have nothing to do with declared objectives of countering international terrorism.

Currently the situation in Damascus and other settlements is assessed to be stable.The environment is being monitored.