Washington forces its allies to accept a bipolar world

By firing missiles on Syria with its French and British allies, the strange President Donald Trump has managed to force the Western powers to accept the end of their unilateral domination of the world. The insignificant result of this demonstration of force drags NATO back to reality. Without having made use of its weapons, Russia now succeeds the Soviet Union in the balance of world power. 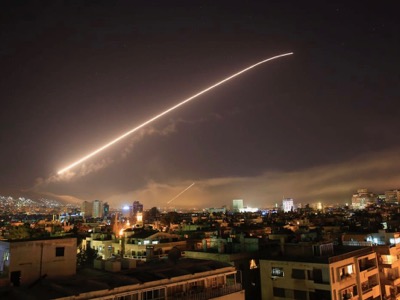 Over the last few weeks, and for the first time in their history, the United States and Russia have mutually threatened one another with a World War. The totally disproportionate character of the crisis in terms of the subject of the dispute demonstrates that what is at stake here today no longer has any connection with what has been happening in the Greater Middle East since 2001, but exclusively with an attempt to maintain the current World Order.

After the gigantic massacre of millions of people over seventeen years, from Afghanistan to Libya, the manner in which about fifty people in East Ghouta (Syria) are said to have died seems almost ridiculous. And yet on 14 April, this was the pretext chosen by Washington, Paris and London to launch a three-party aerial attack.

Let’s avoid getting distracted by the circumstances, and get straight to the heart of the matter – the Western powers are attempting to maintain their domination over the rest of the world, while Russia and China are breaking free of it.

The President of the United States, Donald Trump, did not hesitate to tweet to Russia that he was going to fire missiles of a new generation on its soldiers in Syria. The Russian ambassador, Alexander Zasypkine, immediately responded that these missiles would be intercepted and the planes and ships that fired them would be destroyed. The Turkish Prime Minister, Binali Yıldırım, expressed his astonishment at this « street brawl » and called the participants to reason. All of the actors then began to back-pedal.

The naval group of the aircraft carrier USS Harry S. Truman left its base in Norfolk, apparently to take position facing Syria. It will take several weeks before it is operational. The question of the confrontation between the United States and Russia, in other words the Third World War, will then be raised again.

It goes without saying that the preparation of this naval unit and its 6,500 soldiers began well before the affair of the Ghouta which serves as a pretext for its deployment.

The question is therefore to understand whether, by firing a deluge of missiles on a few abandoned buildings, Washington and its allies have postponed the confrontation in order to occupy a more efficient position, or, on the contrary, have given up on direct warfare and are preparing for a new form of conflict.

The result of the bombing on 14 April is astonishing - 103 missiles are said to have been fired by the Allies. 71 of these are said to have been destroyed in flight by Syria. A decommissioned military laboratory was apparently destroyed, and the installations of two aerodromes were damaged. This deluge of fire allegedly wounded only three people and killed none. If Donald Trump, Emmanuel Macron and Theresa May had intended to show their power, they in fact showed themselves to be powerless.

Seen from Damascus, the message was clear - Syria is in the process of freeing itself from the jihadists, but will not enjoy peace for all that, and will not be able to count on any help from the West for its reconstruction.

The Allies pretend that Syria kept stocks of chemical weapons, despite its membership of the Convention which prohibits them. They claim that they targeted only areas linked to these weapons. And yet, for example, they fired four missiles at the international commercial airport in Damascus, an exclusively civilian target. Happily, the Syrian Arab Army managed to intercept them all.

In total, the Syrian Arab Army, which was only in possession of S-125’s, S-200’s, Buk’s, Kvadrat’s and Osa’s, managed, single-handed, to shoot down two thirds of the Western projectiles. Finally, despite themselves, the Allies had just fought the first battle of their history in which they killed not one enemy. France, which tested its new naval Cruise missile for the first time in a combat situation, was unable to boast of a success to its potential clients.

Of course, the Allies limited themselves. They carefully avoided hitting Russian or Iranian targets, and these two states did not participate in the operation. Nonetheless, the Western armada no longer has the capacity to impose its will on middle powers as long as they are protected by Russia.

Everyone has understood that, as from now :

the United States and Russia – just as in earlier times the USA and the USSR – will refrain from any direct confrontation in order to avoid nuclear war ;

and that the middle powers allied with Russia will not be significantly damaged by the West.

The only military superiority possessed by Washington, London and Paris resides in their capacity to manipulate armed groups and use them as proxies.

By bringing France and the United Kingdom into the fray, President Trump has forced them to accept the reality they were refusing to see.

This grand show, then, was no more than a futile gesture. After a quarter of a century of unilateral domination by the West, its three main military powers have just been down-graded. The world has returned to a bipolar situation like that of the Cold War, although the new rules still need to be defined. The Third World War will have to wait.