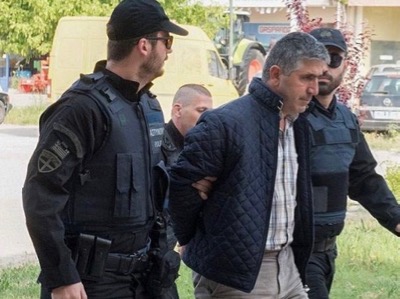 On May 2, 2018, a Turkish citizen named Musa Alerik, a worker in the municipality of Adrianople, passed by mistake into the Greek territory, in the area of Kastanies, and so got arrested by the guard of the nearby outpost.

The impression immediately created was that Musa Alerik’s case was "ideal" for Greece to handle it on the basis of reciprocity and ensure the release of the two Greek soldiers arrested on Thursday, March 1, because they had entered by mistake into the Turkish territory.

We call it "ideal", because the offense that both have committed is exactly the same and actually in the same area.

Even before the twenty-four hour period has elapsed since the incident, the accused Musa Alerik was charged and sentenced to five months imprisonment, a fine of 1,500 euros, legal costs, confiscation of the excavator and suspension of his sentence for three years.

The Turkish citizen, who illegally entered Greece in the afternoon of Wednesday in Kastanies, Evros, is detained until the deportation process is completed in the coming days.

Let us see, however, what the Turkish authorities have done in the case of Lieutenant Mitretodis and Sergeant Kuklatzis. In a case or rather in a simple incident, which is very similar to that of Turk Musa Alerik, since they also entered the Turkish territory by mistake in the same area, a few hundred meters north of the point that Musa Alerik entered, the Turkish Justice transformed these two human souls into a policy tool of the Turkish state. And we are talking about a policy that even attempts to blackmail the Greek government and abolish the Greek Rule of Law, which works right in the case of the eight Turk officers who have sought asylum in Greece.

The Greek Justice has decided not to satisfy Turkey’s request for extradition because there are serious indications that they will not have a fair trial.

And now, the Turkish Justice, with its handling of the case of the two Greek soldiers, comes to prove that the rule of law does not work in Turkey, and to justify furthermore the decision of the Greek Justice for the Eight.

At the same time, for completely identical incidents that happened in the same area, the Greek court handed over justice in less than twenty-four hours, while the Turkish prosecutor, having spent 65 full days, has yet to file charges against the two Greek military men, holding them as hostages in the year 2018, in the 21st century.

And on top of that, the Turkish president, who is claiming his re-election in the June 24th elections, asked publicly Greece to extradite the eight Turkish servicemen, violating the principles of the rule of law, in order “to consider” the two Greek soldiers releasing.

These two cases in question must first and above all concern the European countries and especially ones of European Union, which consider the operation of the rule of law to be the greatest achievement of the modern world and a weapon against barbarity. Unfortunately, they often, in the name of the economic profit and interest, turn a blind eye to the violations of the Ankara governments in basic human rights, with the participation of Turkish justice, which has as a result, instead of the humanization of Turkey, the gradual barbarization of Europe itself.

Source : “Greece: a State of Rule of Law, Turkey: a Gangster State”, by Savvas Kalèndéridès, Voltaire Network, 6 May 2018, www.voltairenet.org/article201020.html

Source : “Greece: a State of Rule of Law, Turkey: a Gangster State”, by Savvas Kalèndéridès, Voltaire Network, 6 May 2018, www.voltairenet.org/article201020.html