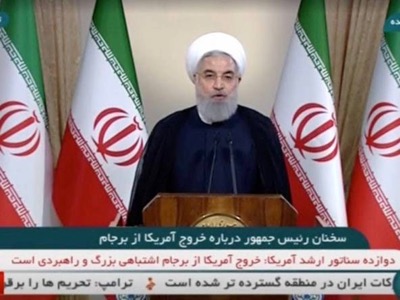 Speaking in a televised address to the people on the JCPOA, President Hassan Rouhani said: “As verified by the International Atomic Energy Agency (IAEA), Iran has lived up to all its commitments and tonight, it was revealed who the unfaithful is”.

“In the past 40 years or even before that, history tells that Americans have had a hostile approach towards the great Iranian nation and the nations of the region; from the coup in Iran against the legal government of Dr Mosadeq to their interference in the affairs of the past regime, supporting Saddam and attacking Iran’s passenger plane and killing innocent people and what they have done against the people of Afghanistan, Iraq, Yemen and the Middle East and North Africa and against other peoples of the world”.

He also referred to the US’ withdrawal from the JCPOA and continued: “In fact, this was a confirmation of what they have been doing in the past months in another way”.

Dr Rouhani added: “The Iranian nation and government, as verified by the IAEA, have lived up to their commitments. Today, we are seeing which country does not respect international obligations”.

“The JCPOA was a multilateral and international agreement verified by the Security Council of the United Nations by Resolution 2231. Therefore, the United States officially announced that it pays no attention to international obligations,” he continued.

Referring to Trump’s decision to withdraw the United States from Paris Agreement, he said: “He has withdrawn from other agreements as well, therefore this kind of action has a history”.

“People just saw that the only regime that supported Trump’s stances was the illegitimate Zionist Regime; the regime that killed our nuclear scientists, the regime that has no day in its history without crimes and oppression against the peoples of the region, especially the great Palestinian nation,” added Rouhani.

He also stated: “I have instructed the Minister of Foreign Affairs to meet and coordinate with the European countries and the two other great countries, Russia and China, in a few weeks from now”.

“If we reached the conclusion at the end of this short time that we can achieve what the Iranian nation wanted from the JCPOA, it will stand despite what the US and the Zionist Regime want and their efforts and Trump’s impolite words tonight, and we can take our own steps for peace and security of the region and the world,” he added.

Dr Rouhani continued: “If we see that our interests are not met, I will soon speak to the Iranian nation and tell them the decisions made in this regard”.

The people of Iran must not have any concerns for the country’s future, said the President adding: “From weeks and months ago, we had come to the conclusion that Trump will not be loyal to international commitments, including the JCPOA, an we have taken economic decisions on this basis”.

“We now have JCPOA without the US and people will witness that economic growth and market stability will continue to stand,” he said.

On the provision of the currency needs of the country, he said: “In basic goods, people must not have any concerns at all”.

Stressing that the Iranian nation will be more united and determined than the past, he said: “What Trump did was a psychological war and economic pressure and we will not let him to be successful in it”.

“History will show that as our nation has been successful in dealing with all conspiracies, it will be victorious in this issue as well,” President Rouhani continued.

“I have instructed the Atomic Energy Organisation to be ready for the next steps if necessary and start industrial enrichment without any limitation and we will wait a few weeks until we implement it, consulting with our friends and allies, as well as the other members to the JCPOA who have signed it and will be loyal to it,” continued Rouhani.

He also said: “If the interests of our nation are met in the JCPOA, we will continue this trend but if it serves as only a paper without securing Iranian nation’s interests, then we will have a clear path ahead of us”.

President of the Islamic Republic of Iran added: “I assure the Iranian nation that the government has plans for all contingencies from months ago and we will not face any serious problems at all”.

Stating that people will not have any problems in their daily lives in the coming weeks, months and years, he said: “Tonight, on the one hand I am sorry that the great American people have been plagued by rulers who have undermined their dignity, and on the other hand, I am happy that an annoying creature has withdrawn from the JCPOA”.

“Without a doubt, we will successfully continue our path and I will speak to our great, dear people soon in a detailed interview,” the President continued.

Statement by Hassan Rohani at the 2014 Summit of CICA

Remarks by Hassan Rohani at the UN 68th General Assembly