The French authorities, followed by their German homologues, have notified the Syrian Ministry of Foreign Affairs that they oppose voting for the Syrian Presidential Elections being organized on French territory. How should France’s conduct be interpreted? It reflects poorly on contemporary France demonstrating that a/she has very little respect for democracy, human and civil rights and b/ she is acting in contradiction with her international commitments. 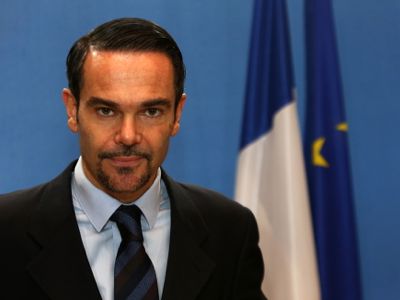 Romain Nadal, spokesman for the French Ministry of Foreign Relations. For France, it is not for the Syrian people to choose who governs them; the only acceptable end to the war which has been so cruelly unleashed on Syria, is accepting a transitional government appointed by the Big Powers.

A presidential election is going to be held in Syria on 3 June 2014 and from 28 May 2014 for Syrians resident abroad. [1]. Yet the French authorities have notified the Syrian government that they are opposed to this election being organized “on any part of French territory even in the Syrian embassy located in France”. [2]. The French authorities, who have specifically stated that they “hope” that the opposition will be taken into account and respected, consider that they are able to base this decision on the Vienna Convention of 24 April 1963 on Consular Relations [3].

Those who are currently governing France, have come offering, for some years now, numerous demonstrations, (though not declared given that the French Parliament is opposed to this) of the hostility that they harbour towards Syria. Not satisfied with contributing to the misfortunes of Syrians in Syria, the French government wants to go further and deprive Syrians living in France, some as refugees, of their right to express how their state should be governed, in a democratic fashion.

France’s claim to apply international law is, in itself, a step forward, given its past extravagances. But the legal services of France’s ministries have not done their homework because this time France is exposed to sanctions, for openly violating international law…. on two counts.

Count One: France is guilty of acting in bad faith

Those currently governing France, specifically the French President (François Hollande), the Prime Minister (Manuel Valls) and the Minister for Foreign Affairs (Laurent Fabius), have scant regard for the cornerstone of international law: you should keep a promise. This is the cornerstone of all law in general. This principle can be encapsulated in the Latin maxim: pacta sunt servanda (agreements must be respected). In the context of the law governing relations between states, this principle implies that states must follow through with treaty commitments in good faith [4].

Let’s turn to the Vienna Convention of 24 April 1963 on Consular Relations. How would it permit a state to obstruct the holding of foreign elections on its territory? Art 5 of this Convention specifically addresses what constitutes consular functions. It begins with a detailed list of these functions. This list does not include the right of the receiving State to oppose the exercise of these functions.

“Certain functions of an administrative nature” is on the list (see art 5 (f)). Clearly, the organization of elections falls within the ambit of “functions of an administrative nature”. It is important to highlight that France herself, just like any other State, regularly organizes for its nationals, who have set themselves up outside French territory, to vote in French consulates. For example, on 25 May 2014 coming up, French citizens living abroad, can go to the French consulates to vote in the European elections. As a result, on an entirely literal application of the Vienna Convention of 24 April, there is nothing in it that permits a State party to it, to be opposed to a foreign state organizing its elections in its consulate or its embassy.

The French authorities cannot base their opposition to organizing elections on a single provision that confers it with the power to oppose. This provision comes right at the end of the aforementioned list and specifically and exclusively relates to the general case of “all the other functions entrusted to a consular post by the sending State”.

Thus, to be opposed to the organization of an election in the consulate, assumes that the state putting up opposition considers that such election-organizing does not fall within the ambit of administrative functions but the ambit of “all other functions” which are not defined with greater precision. To sustain such an interpretation, you must be kidding yourself. It follows then, that France is not following through with its treaty obligations in good faith, and that by doing so, she is violating international law.

The law on consular relations, which assumes that states will see each other as friends and equals, expressly outlaws any discriminatory treatment between States (see the Vienna Convention of 24 April 1963, art 72).

Yet, in this case, France does not impose a blanket ban, prohibiting all foreign elections from being held on her soil, nor on the holding of all presidential elections. It imposes a finely tailored ban, limited in its scope to the forthcoming Syrian Presidential Elections. The Algerian elections, the US elections and even the Israeli elections are still allowed, as are all others.

Consequently, by reserving discriminatory treatment exclusively for the Syrian state, France is violating the international law governing consular relations, in particular the undertaking she gave when she ratified the Vienna Convention of 24 April 1963.

Therefore, there is potential for France to be brought before the International Court of Justice.