For Italy – a new government, the same "privileged ally" 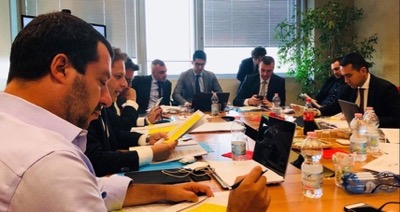 The "Contract for the Government of Change" - stipulated by Luigi Di Maio and Matteo Salvini on behalf of the 5 Star Movement and the League - on the one hand "confirms Italy’s membership of the Atlantic Alliance, with the United States of America as a privileged ally”, and on the other, promises "an open-minded attiutude to Russia, which should be perceived not as a threat but as an economic and commercial partner (which would imply the withdrawal of sanctions), to be rehabilitated as a strategic interlocutor for the resolution of regional crises" and even as a "potential partner for NATO".

The formula is not new. In June 2016, Prime Minister Renzi assured President Putin that "the Cold War is now history", and that "Europe and Russia can be excellent neighbors". A month later, at the Warsaw Summit, Renzi signed the EU-NATO strategic pact against Russia.

How can the new government cease "perceiving" Russia as a threat and act accordingly, while it remains a member of NATO, which, under the command of the "privileged ally", is increasingly committed to combating "the Russian threat"?

The new government intends to "re-evaluate our participation in international missions in terms of their real importance for the national interest". Does this mean that it intends to withdraw the Italian troops deployed in Latvia and the Italian fighter-bombers deployed in Estonia, close to Russian territory, on the pretext, invented by NATO, of facing «Russian aggression»?

Will it prevent US / NATO commands and bases in Italy, from Vicenza to Aviano, from Naples to Sigonella, from being used for military operations against Russia?

First of all, will the new government reject the new B61-12 nuclear bombs that the US is preparing to deploy in Italy against Russia, exposing our country to growing danger as a forward base of US nuclear strategy?

Will it refuse to provide the Pentagon with pilots and fighter-bombers ready for nuclear attack, within the framework of NATO ?

Will the new government ask the US to remove all nuclear weapons from our territory, on the basis of the Non-Proliferation Treaty, which has so far been violated? Will it adhere to the UN Treaty on the Prohibition of Nuclear Weapons (as Luigi Di Maio is committed to do by signing the ICAN Parliamentary Pledge)?

The decision not to adhere to the UN Treaty was taken before by the Italian Parliament, in the North Atlantic Council, where according to NATO rules "there is no vote or majority decision", but "decisions are taken unanimously and by mutual agreement", that is, in agreement with the United States of America, to which the leading role of Supreme Allied Commander in Europe and other key commands are entitled by right.

With regard to the military industry, the Contract considers "its protection, with particular regard to the financing of research, for the design and construction of ships, aircraft and high-tech systems" to be essential.

What’s new in the program of the "Government of Change", compared to the "White Book for Defense" institutionalized by the Gentiloni government, which defines the military industry as the "pillar of our national system"?

Will the new government stop or continue participating in the US F-35 fighter program, which commits Italy to buy 90 planes at a cost of 13-16 billion euros?

This is unavoidable expenditure if one wants to maintain the United States of America as a "privileged ally".