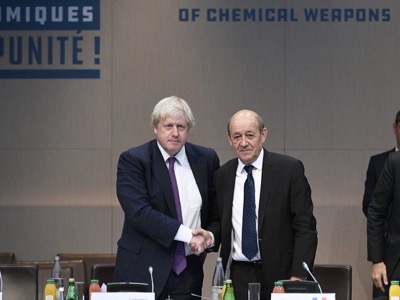 I’m grateful to the French Chair of the Partnership for convening this important meeting.

We gather at a moment when the rules that guarantee the security of every country – including the global ban on chemical weapons – are gravely imperilled.

Almost a century ago, the world united to prohibit the use of chemical weapons with the Geneva Protocol of 1925.

More recently, 165 countries have signed the Chemical Weapons Convention of 1997 and agreed never to develop, manufacture or stockpile these munitions.

Banning this terrible category of weapon must rank among the seminal diplomatic achievements of the last century.

And yet I have the unwanted distinction of representing a country which has experienced the use of chemical weapons on its soil, not in a 20th century conflict but on 4 March this year, when a nerve agent struck down a father and daughter in Salisbury. Sergei and Yulia Skripal were rushed to hospital after being found reeling and distressed on a park bench.

In the days that followed, our experts had to seal off 9 locations in Salisbury – including a restaurant and a cemetery – in order to screen them for possible contamination. A police officer, Detective Sergeant Nick Bailey, was hospitalised after suffering the effects of exposure to the nerve agent.

Scores of unwitting bystanders had to be checked for symptoms. Their only involvement was that chance had placed them in certain areas of Salisbury on 4th March; they could have been from any country – including those represented here – for Salisbury ranks among the most popular tourist destinations in Europe.

The fact that no bystander was seriously harmed owed everything to luck and nothing to the perpetrators, who clearly did not care how many innocent people they endangered.

I am glad to say that Mr Skripal was released from hospital earlier today – though he is still receiving treatment. His daughter and Detective Sergeant Bailey were discharged last month.

Our experts analysed samples taken from the scene and identified them as a fourth generation, military-grade ‘Novichok’ nerve agent. The highest concentration was found on the handle of the front door of Mr Skripal’s home. We sent samples to the Organisation for the Prohibition of Chemical Weapons, whose experts independently confirmed this identification.

‘Novichok’ nerve agents were first developed in the Soviet Union in the 1980s. The British government has information that within the last decade, Russia has produced and stockpiled small quantities of ‘Novichok’ under the same programme that also investigated how to deliver nerve agents, including by application to door handles.

The fact that such a pure nerve agent was used narrows down the list of culprits to a state actor. And there is only one state that combines possession of Novichoks with a record of conducting assassinations and an obvious – indeed publicly avowed – motive for targeting Sergei Skripal.

We are left with no alternative conclusion except that the Russian state was responsible for attempted murder in a British city, using a banned nerve agent in breach of the Chemical Weapons Convention.

Our friends around the world shared our assessment and 28 countries and NATO acted in solidarity with Britain by expelling over 130 Russian diplomats – the biggest coordinated expulsion in history. Many of those countries are represented here today; once again, I thank them from the bottom of my heart.

This resolute action demonstrated our shared determination to ensure there can be no impunity for the use of chemical weapons, whether by a state or a terrorist group, whether in the UK or Syria or anywhere else.

On 7 April, barely a month after the Salisbury incident, the Asad regime used poison gas in the Syrian town of Douma, killing as many as 75 people, including children. Britain, France and the United States responded by launching targeted, precise and proportionate strikes against the chemical weapons infrastructure of the Syrian regime.

Even before the atrocity in Douma, a joint investigation by the UN and the OPCW had found the Asad regime guilty of using chemical weapons on 4 separate occasions between 2015 and 2017.

Russia’s response was not to enforce the ban on chemical weapons but to use its veto in the Security Council to protect Asad by shutting down the international investigation. That is all the more tragic when you consider that Russia is a permanent member of the Security Council with special responsibility for upholding peace and security, including the global ban on chemical weapons.

Given that the Kremlin seems determined to block any international investigation empowered to attribute responsibility for chemical attacks in Syria, then we must work together to develop another mechanism.

In the meantime, we have it within our power to impose sanctions on any individuals or entities involved in the use of chemical weapons:

we can collect and preserve the evidence of these crimes

we can call for a special session of the Conference of States Parties to the Chemical Weapons Convention, in order to consider how best to support the Convention and its implementing body, the OPCW.

If that moral calamity were to happen, the security of every nation would be at risk.

My goal is to be the last foreign minister who attends a gathering like this as the representative of a country that has witnessed the use of chemical weapons. Thank you.

Source : “Boris Johnson’s keynote speech at the Paris conference to fight against impunity for the use of chemical weapons”, by Boris Johnson, Voltaire Network, 25 May 2018, www.voltairenet.org/article201271.html

Source : “Boris Johnson’s keynote speech at the Paris conference to fight against impunity for the use of chemical weapons”, by Boris Johnson, Voltaire Network, 25 May 2018, www.voltairenet.org/article201271.html