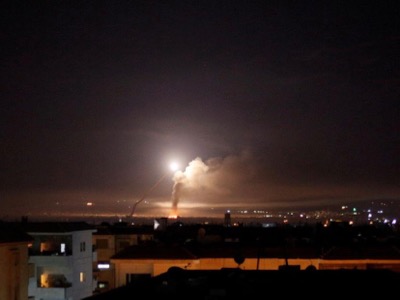 On 10 May 2018, shortly after midnight local time, as our citizens were asleep in their homes, the Quds Force of the Iranian Revolutionary Guard fired a barrage of approximately 20 rockets into Israeli territory. Thankfully, there were no Israeli casualties or injuries. Our security forces retaliated against the rocket launcher that had attacked Israel, as well as additional Iranian military targets in Syria.

Israel holds the Government of Iran, together with the Syrian regime, directly responsible for this attack, and we will continue to defend our citizens vigorously against all acts of aggression. Israel is not interested in escalation, but under no circumstances will we allow Iran to establish a military presence in Syria whose purpose is to attack Israel and to make an already fragile situation in the region deteriorate.

This brazen attack on our sovereignty did not occur in a vacuum. Just last February, my delegation informed you of the explosive-laden unmanned aerial vehicle (UAV) that Iranian forces had launched from Syria into Israel. We have warned you repeatedly about Iran’s alarming entrenchment in Syria, and these acts of aggression are, regrettably, a realization of these very warnings. These actions are part of a dangerous pattern of violent Iranian activities throughout our region, all aimed at fulfilling the goal of terrorizing innocent people and implementing a radical, extremist regime stretching from the Persian Gulf to the Mediterranean Sea.

I call on the Security Council to condemn this attack immediately and demand that Iran remove its military presence from Syria that not only threatens Israel, but the stability of our entire region. The international community must not stand idly by while a tyrannical regime attacks a sovereign nation and continues to threaten the very existence of a Member State of the United Nations.