Elected for his promises to change the paradigm, President Trump continues to astonish all those who take him for an idiot. Yet all he is doing is implementing the ideas that he developed during his electoral campaign, thus taking his place in a political tradition which, although long neglected, is solidly anchored in US history. Leaving aside the President’s public relations communications, Thierry Meyssan analyses his acts as compared with his engagements. 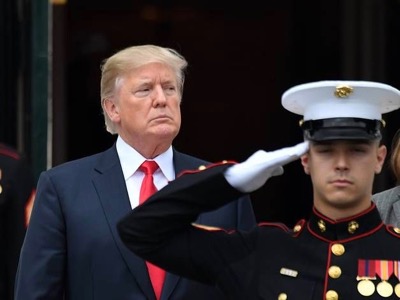 During the US Presidential electoral campaign, we demonstrated that the rivalry between Hillary Clinton and Donald Trump did not concern their style so much as their culture [1]. The outsider challenged the Puritan domination over the USA, and demanded a return to the original compromise of 1789 – the Bill of Rights – between the revolutionaries who were fighting King George, and the major land-owners of the 13 colonies.

Not as amateur in politics as people thought, he had already displayed his opposition to the system on the very day of the attacks of 9/11 [2], then, later, with the controversy he maintained concerning President Obama’s birthplace.

We pointed out that on foreign policy, Presidents George W. Bush and Barack Obama had chosen the option of war in Afghanistan, Iraq, Libya and Syria, implementing the strategy of Admiral Cebrowski to destroy the state structures of all the States in the « Greater Middle East » [3] ; while on the interior, they suspended the Bill of Rights - all of which led to the depreciation and pauperisation of the « poor white » elements of US society.

On the contrary, Donald Trump continually denounced the American Empire, and announced the return to Republican principles. He espoused the ideas of Andrew Jackson (1829-37) [4], and was adopted by the ex-collaborators of Richard Nixon (1969-74) [5].

He synthesised his ideas in interior politics with the slogan « Make America Great Again ! », in other words, no longer the pursuit of the imperial mirage, but a return to the « American dream » of personal enrichment. As for his exterior politics, he used the slogan « America First ! », which we interpreted not in the sense it was given during the Second World War, but the meaning it had originally. Therefore we did not see him as a neo-Nazi, but as a politician who refused to engage his country in the service of transnational elites.

More surprisingly, we thought it would be impossible for him to reach a cultural agreement with the Mexican minority, and we forecast that he would finally facilitate a friendly separation for the independence of California (CalExit) [6].

Our analysis of the objectives and methods of Donald Trump nonetheless left open the question of the capacity of a US President to modify the military strategy of his country [7].

Writing for two years, and expressing ideas which were completely opposite to all other commentators, we were wrongly classified as partisans of Donald Trump. This is an incorrect interpretation of our work. We are not United States electors, and as as result, we do not support any candidate to the White House. We are political analysts, and we attempt only to understand the facts and to anticipate their consequences.

Where are we today?

We must concentrate on the facts and eliminate all President Trump’s public relations statements from our analysis.

We must distinguish the effects for which Donald Trump is directly responsible from those which are the continuity of his predecessors and the effects due to ambient world evolution.

Donald Trump gave his support to a demonstration of white supremacists in Charlottesville, and also to the movement for the right to carry arms, including after the slaughter at Parkland. These positions were interpreted as support for far-right ideas and violence. On the contrary, however, it was for him a promotion of “Human Rights”, US version, as they were defined in the first two amendments to the Bill of Rights.

We may, of course, criticise the US definition of « Human Rights » as strongly as we like — and in the tradition of Thomas Paine [8], we do not hesitate to criticise it — but that is another question.

Lacking means, the completion of the Wall at the Mexican border, which had been built by his predecessors, is a long way from being finished. It is still too soon to draw conclusions. The confrontation with those Hispanic immigrants who refuse to speak English and to integrate the compromise of 1789 still has not happened. Donald Trump went no further than taking the Spanish service off the White House communication system.

Concerning the question of climate change, Donald Trump rejected the Paris agreement, not because he is indifferent to ecology, but because it imposes financial regulations which will only benefit those who control carbon trading [9].

As far the economy is concerned, Donald Trump has not yet managed to impose his revolution – exonerating exports and taxing imports. However, he withdrew his country from the free-exchange treaties which had not yet been ratified, like the Trans-Pacific Partnership (TPP). While his Border Adjustment Tax was rejected by Congress, he is trying today to dodge the parliamentarians and to create prohibitive taxes on the import of certain products, a move which flabbergasted his country’s allies and provoked the anger of China [10].

Similarly, Donald Trump is slow to launch his Rooseveltian programme for the building of infrastructures, for which he has so far found only 15 % of the necessary finance. And he has not yet launched his programme soliciting foreign specialists to help improve US industry, although this was announced in his National Security Strategy [11].

But finally, the little he has already achieved has been enough to kick-start production and employment in his country.

In order to liquidate the American Empire, Donald Trump had announced his intention to cease support for the jihadists, to dissolve NATO, to abandon the Cebrowski strategy, and to repatriate the occupation troops. It is obviously much more difficult to reform the primary federal administration, the armed forces, than to change the economic and financial regulations by decree.

In priority, President Trump placed trustworthy people at the head of the Department of Defense and the CIA in order to avoid all attempts at rebellion. He reformed the National Security Council by diminishing the role of the Pentagon and the CIA [12]. He immediately put an end to the « colour revolutions » and other coups d’etat which had characterised the previous administrations.

Then he convinced the Arab nations, including Saudi Arabia, to cease their support for the jihadists [13]. The consequences of this decision quickly became apparent with the fall of Daesh in Iraq and in Syria. Simultaneously, Donald Trump postponed the dissolution of NATO, to which he simply added an anti-terrorist function [14]. Meanwhile, in the context of the British campaign against Moscow, the Alliance is actively developing its anti-Russian plan of action [15].

Donald Trump only kept NATO in order to control the vassals of the United States. He deliberately discredited the G7, forcing his baffled allies to assume their own responsibilities.

To interrupt the Cebrowski strategy in the « Greater Middle East », Donald Trump is preparing a reorganisation of that zone around his withdrawal from the agreements with Iran (JCPoA and secret bilateral agreement) and from his plan for the solution of the Palestinian question. While this project, which both France and the United Kingdom are attempting to sabotage, has little chance of managing to install regional peace, it enables him to paralyse the initiatives by the Pentagon. However, the superior officers are preparing to apply the Cebrowski strategy in the « Caribbean basin ».

The initiative for the solution of the Korean conflict, the last vestige of the Cold War, ought to enable him to call into question the validity of NATO. The allies only engaged in this organisation to prevent a European version of a situation like that of the Korean war.

In the end, the US armed forces should no longer be used to crush small countries, but exclusively to isolate Russia, even to prevent China from developing its « Silk Roads ».

[3] “The US military project for the world”, by Thierry Meyssan, Translation Pete Kimberley, Voltaire Network, 22 August 2017.