Throughout her voyage of the Levant, the German Chancellor, Angela Merkel (Angie), is presenting herself as a person with a good heart, who wants Germany to play its part to helping the Syrian refugees. But the people that she is speaking see her as a fallen angel, who is masking her true intentions which are to wage war against Syria. 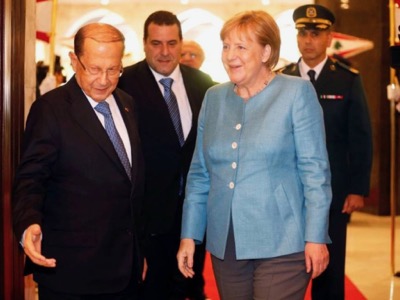 The German Chancellor, Angela Merkel (Angie), is making an official visit to Jordan and Lebanon. Officially, she intends to prevent a fresh round of refugees arriving in Europe by helping Jordan and Lebanon respond to the Syrian crisis.

This visit is taking place while the US plan is being drawn up to unlock the Israeli-Arab conflict.

Angie was accompanied by a delegation of CEOs of German companies that hope to negotiate contracts, in particular, for the “reconstruction” of Lebanon.

In Amman, the Chancellor was received by King Abdallah II. His concern was that the pro-Iranian Hezbollah might lay down roots in South Lebanon which would threaten both Israel and Jordan. Angie released a 100 million dollar loan to help the Kingdom address its economic crisis, attributable in part to its welcoming 650 000 Syrian refugees and its responding to IMF demands. It appears that Angie supported the US Plan to establish a New Jordan that would bring together all the Palestinian territories (Cisjordan and Gaza).

The Chancellor also visited the German troops based at Al-Asrak after they withdrew from Turkey.

When she got to Beirut, Angie was received by the following dignitaries, one after the other: Prime Minister Saad Hariri, the President of the Assembly Nabih Berry and the President of the Republic, Michel Aoun. During their first meeting, she stressed the burden that the influx of Syrian refugees has for little Lebanon, pledged to help stabilize this population and to develop the Lebanese economy. Saad Hariri thanked Germany for participating in the Special Tribunal tasked with trying those that masterminded the assassination of his father, Rafiq Hariri (this tribunal with its vague mandate had been initially established to inculpate the Lebanese and Syrian presidents, Émile Lahoud and Bashar al-Assad respectively).

The President of the Assembly, Nabih Berry, a pedagogue, petitioned for improved coordination with the Syrian government in order to organize for the refugees to return.

You cannot compare the arrival of Syrians in Lebanon with the influx of Syrian in Germany. This is because Lebanon and Syria were historically the same country until the Second World War. If you must make a comparison, it is with German reunification, although today, noone is making any attempt to reunify Great Syria. Today the number of Syrians in Lebanon is well over a million. However not all are refugees.

The third meeting did not prove nearly so fruitful. President Aoun stressed the burden that the refugees presented for his country and requested their return to Syria, to areas which have now been liberated. The issue is that Germany, does not consider that the liberated zones are controlled by democratically elected authorities but by “moderate opposition” that President Aoun classes as jihadists. Michel Aoun’s position is that by proposing to help Libya welcome the Syrians, Berlin is seeking to make Lebanon participate in Germany’s anti-Syrian policy.

During the CEDRE conference, in April at Paris, Germany had promised to donate 61 million dollars to Lebanon. At the time, the same polemic had arisen and the Minister of Foreign Affairs Gebran Bassil (son-in-law of President Aoun) had threatened to refuse this money if it was conditioned on the naturalization of refugees.

The German Ambassador, Martin Huth, has assured the Lebanese media that his country had never envisaged forcing Lebanon to naturalize anyone. However, Angie stressed that, in her opinion, the refugees could only return to Lebanon under the responsibility of the United Nations (thus not the democratically elected authorities).