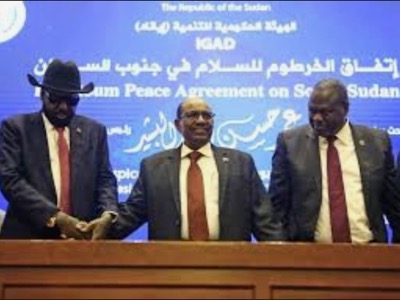 Whereas H.E. Omer Hassan Ahmed El-Bashir, President of the Republic of Sudan was entrusted by the 32nd Extra-Ordinary Summit of IGAD on South Sudan, convened in Addis Ababa, Ethiopia, on 21st June 2018, to facilitate a second round of face-to-face discussion between H.E. Salva Kiir Miyardit and Dr. Riek Machar Teny to resolve the outstanding issues on governance and security arrangements,

Whereas H.E. Omer El-Bashir is entrusted further to discuss measures to be taken to rehabilitate the economy of the Republic of South Sudan through bilateral cooperation with the Republic of Sudan,

Whereas H.E. Omer El-Bashir facilitated direct meetings between H.E. Salva Kiir Miyardit and Dr. Riek Machar Teny from 25th to 26th June 2018, the first of which was graciously attended by H.E. Yoweri Museveni, the President of Uganda,

Whereas H.E. Omer El-Bashir also convened on 26th June 2018 a session of talks with other political parties of the Republic of South Sudan which discussed the same issues,

1. A permanent ceasefire is hereby declared throughout the Republic of South Sudan and shall enter into force within seventy two (72) hours of signing of this Declaration of Agreement. The permanent ceasefire shall be based on the Cessation of Hostilities (COH) Agreement signed on December 21, 2017. Within seventy two (72) hours of signing this Declaration of Agreement the parties shall agree on all the ceasefire arrangements including disengagement, separation of forces in close proximity, withdrawal of allied troops, opening of humanitarian corridors, and release of prisoners of war and political detainees. All relevant provisions of the Agreement on Resolution of Conflict in South Sudan (ARCSS) shall apply unless it is agreed otherwise. The parties shall agree on self-monitoring mechanisms. Furthermore, IGAD and African Union member states are kindly invited to deploy the necessary forces to supervise the agreed permanent ceasefire.

2. The security arrangements that shall be adopted shall aim at building national army, police and other security organs of an all-inclusive character that shall be free from tribalism and ethnic affiliations. Policies shall also be agreed upon for the disarmament of civilians all over the country.

4. Efforts for improving the infrastructure and basic services in the Republic of South Sudan, particularly in the sectors most connected with the livelihood of citizens, shall be intensified. The parties appeal to the international community to help in this regard.

5. The security of the oil fields in Unity State (Blocks 1, 2, and 4) and Tharjiath (Block 5A) is the responsibility of all South Sudan citizens. If need be, the Government of South Sudan, while undertaking its security duties, shall work in this regard in collaboration and coordination with the Government of Sudan. The Government of South Sudan in collaboration with the Government of Sudan shall immediately rehabilitate the oil fields identified above, and others as would be agreed upon, for the resumption and the restoration of the previous levels of oil production. All the outstanding issues related to the oil sector, particularly on the cost of oil field rehabilitation, shall be technically assessed and economically valued by the relevant authorities of South Sudan and Sudan respectively. Each party is entitled to seek the support of an impartial technical third party for independently verifying the assessments but without causing delay in the joint operations. Such data/information shall provide guidance for any political decision that may be undertaken by the leaders of the two sisterly countries. The Government of South Sudan is committed to use the petroleum proceeds to improve the livelihood of South Sudanese and to alleviate poverty and suffering.

Done in the Republican Palace, Khartoum, the Republic of Sudan, on this Day 27th of June 2018.

South Sudan: Realities and Fictions
THE ART OF WAR